Hidden weaknesses within volcanoes may cause their collapse 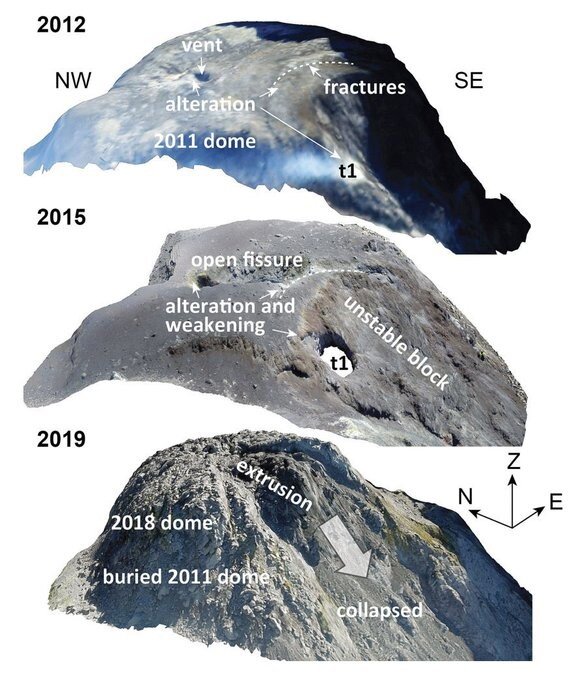 Lava domes form at the top of many volcanoes when viscous lava erupts. When they become unstable, they can collapse and cause a hazard. An international team of researchers has analyzed summit dome instabilities at the Merapi Volcano, Indonesia. The researchers hope that by understanding the inner processes, volcano collapses can be better forecasted.

Catastrophic volcano collapses and associated explosions, like the famous collapse of Mt St Helens in 1980, are widely considered as unpredictable. This is because the physical properties, stress conditions, and internal structure of volcanoes and the lava domes on top of many volcanoes are not well understood and can change rapidly from one day to another.

The research demonstrated that a horseshoe-shaped fracture zone in the volcanoes summit region that formed in 2012 and which guided intense gas emission in the past was subsequently buried by renewed lava outpourings in 2018. The new lava dome that has been forming since 2018 started to show signs of instability in 2019 and the researchers were able to show that the summit dome of the volcano is currently collapsing along this now-hidden fracture zone. The research team then considered the changes that must have occurred along this now buried fracture zone from long term gas flux by measuring the composition and physical properties along similar fracture zones in the volcano’s summit region, and concludes that weakened rocks of the hidden fracture zone are likely the main cause for the location of the ongoing summit instabilities at Merapi.

This finding now offers an opportunity for monitoring teams at volcanoes to better forecast locations of potential volcano collapse by employing long-term remote sensing monitoring techniques to assess the hazards associated with summit dome and edifice failure and collapses at active volcanoes worldwide.


Citation:
Hidden weaknesses within volcanoes may cause their collapse (2022, February 25)