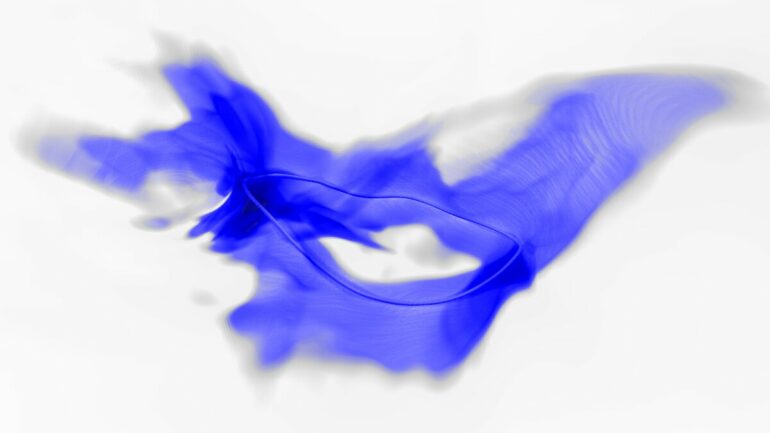 Physicists searching—unsuccessfully—for today’s most favored candidate for dark matter, the axion, have been looking in the wrong place, according to a new supercomputer simulation of how axions were produced shortly after the Big Bang 13.6 billion years ago.

The simulation at Berkeley Lab’s National Research Scientific Computing Center (NERSC) found the axion’s mass to be more than twice as big as theorists and experimenters have thought: between 40 and 180 microelectron volts (micro-eV, or μeV), or about one 10-billionth the mass of the electron. There are indications, Safdi said, that the mass is close to 65 μeV. Since physicists began looking for the axion 40 years ago, estimates of the mass have ranged widely, from a few μeV to 500 μeV.

“We provide over a thousandfold improvement in the dynamic range of our axion simulations relative to prior work and clear up a 40-year old question regarding the axion mass and axion cosmology,” Safdi said.

The more definitive mass means that the most common type of experiment to detect these elusive particles—a microwave resonance chamber containing a strong magnetic field, in which scientists hope to snag the conversion of an axion into a faint electromagnetic wave—won’t be able to detect them, no matter how much the experiment is tweaked. The chamber would have to be smaller than a few centimeters on a side to detect the higher-frequency wave from a higher-mass axion, Safdi said, and that volume would be too small to capture enough axions for the signal to rise above the noise.

“Our work provides the most precise estimate to date of the axion mass and points to a specific range of masses that is not currently being explored in the laboratory,” he said. “I really do think it makes sense to focus experimental efforts on 40 to 180 μeV axion masses, but there’s a lot of work gearing up to go after that mass range.”

One newer type of experiment, a plasma haloscope, which looks for axion excitations in a metamaterial—a solid-state plasma—should be sensitive to an axion particle of this mass, and could potentially detect one.

“The basic studies of these three-dimensional arrays of fine wires have worked out amazingly well, much better than we ever expected,” said Karl van Bibber, a UC Berkeley professor of nuclear engineering who is building a prototype of the plasma haloscope while also participating in a microwave cavity axion search called the HAYSTAC experiment. “Ben’s latest result is very exciting. If the post-inflation scenario is right, after four decades, discovery of the axion could be greatly accelerated.”

The work will be published Feb. 25 in the journal Nature Communications.

Dark matter is a mysterious substance that astronomers know exists—it affects the movements of every star and galaxy—but which interacts so weakly with the stuff of stars and galaxies that it has eluded detection. That doesn’t mean dark matter can’t be studied and even weighed. Astronomers know quite precisely how much dark matter exists in the Milky Way Galaxy and even in the entire universe: 85% of all matter in the cosmos.

To date, dark matter searches have focused on massive compact objects in the halo of our galaxy (called massive compact halo objects, or MACHOs), weakly interacting massive particles (WIMPs) and even unseen black holes. None turned up a likely candidate.

“Dark matter is most of the matter in the universe, and we have no idea what it is. One of the most outstanding questions in all of science is, ‘What is dark matter?'” Safdi said. “We suspect it is a new particle we don’t know about, and the axion could be that particle. It could be created in abundance in the Big Bang and be floating out there explaining observations that have been made in astrophysics.”

Though not strictly a WIMP, the axion also interacts weakly with normal matter. It passes easily through the earth without disruption. It was proposed in 1978 as a new elementary particle that could explain why the neutron’s spin does not precess or wobble in an electric field. The axion, according to theory, suppresses this precession in the neutron.

“Still to this day, the axion is the best idea we have about how to explain these weird observations about the neutron,” Safdi said.

In the 1980s, the axion began to be seen also as a candidate for dark matter, and the first attempts to detect axions were launched. Using the equations of the well-vetted theory of fundamental particle interactions, the so-called Standard Model, in addition to the theory of the Big Bang, the Standard Cosmological Model, it is possible to calculate the axion’s precise mass, but the equations are so difficult that to date we have only estimates, which have varied immensely. Since the mass is known so imprecisely, searches employing microwave cavities—essentially elaborate radio receivers—must tune through millions of frequency channels to try to find the one corresponding to the axion mass.

“With these axion experiments, they don’t know what station they’re supposed to be tuning to, so they have to scan over many different possibilities,” Safdi said.

Safdi and his team produced the most recent, though incorrect, axion mass estimate that experimentalists are currently targeting. But as they worked on improved simulations, they approached a team from Berkeley Lab that had developed a specialized code for a better simulation technique called adaptive mesh refinement. During simulations, a small part of the expanding universe is represented by a three-dimensional grid over which the equations are solved. In adaptive mesh refinement, the grid is made more detailed around areas of interest and less detailed around areas of space where nothing much happens. This concentrates computing power on the most important parts of the simulation.

The technique allowed Safdi’s simulation to see thousands of times more detail around the areas where axions are generated, allowing a more precise determination of the total number of axions produced and, given the total mass of dark matter in the universe, the axion mass. The simulation employed 69,632 physical computer processing unit (CPU) cores of the Cori supercomputer with nearly 100 terabytes of random access memory (RAM), making the simulation one of the largest dark matter simulations of any kind to date.

The simulation showed that after the inflationary epoch, little tornadoes, or vortices, form like ropey strings in the early universe and throw off axions like riders bucked from a bronco.

By keeping track of the axions that are whipped off, researchers are able to predict the amount of dark matter that was created.

“We solve for the axion mass both in a more clever way and also by throwing just as much computing power as we could possibly find onto this problem,” Safdi said. “We could never simulate our entire universe because it’s too big. But we don’t need to stimulate our entire universe. We just need to simulate a big enough patch of the universe for a long enough period of time, such that we capture all of the dynamics that we know are contained within that box.”

The team is working with a new supercomputing cluster now being built at Berkeley Lab that will enable simulations that will provide an even more precise mass. Called Perlmutter, after Saul Perlmutter, a UC Berkeley and Berkeley Lab physicist who won the 2011 Nobel Prize in Physics for discovering the accelerating expansion of the universe driven by so-called dark energy, the next-generation supercomputer will quadruple the computing power of NERSC.

“We want to make even bigger simulations at even higher resolution, which will allow us to shrink these error bars, hopefully down to the 10% level, so we can tell you a very precise number, like 65 plus or minus 2 micro-eV. That then really changes the game experimentally, because then it would become an easier experiment to verify or exclude the axion in such a narrow mass range,” Safdi said.

For van Bibber, who was not a member of Safdi’s simulation team, the new mass estimate tests the limits of microwave cavities, which work less well at high frequencies. So, while the lower limit of the mass range is still within the ability of the HAYSTAC experiment to detect, he is enthused about the plasma haloscope.

“Over the years, new theoretical understanding has loosened the constraints on the axion mass; it can be anywhere within 15 orders of magnitude, if you consider the possibility that axions formed before inflation. It’s become an insane task for experimentalists,” said van Bibber, who holds UC Berkeley’s Shankar Sastry Chair of Leadership and Innovation. “But a recent paper by Frank Wilczek’s Stockholm theory group may have resolved the conundrum in making a resonator which could be simultaneously both very large in volume and very high in frequency. An actual resonator for a real experiment is still some ways away, but this could be the way to go to get to Safdi’s predicted mass.”

Once simulations give an even more precise mass, the axion may, in fact, be easy to find.

“It was really crucial that we teamed up with this computer science team at Berkeley Lab,” Safdi said. “We really expanded beyond the physics field and actually made this a computing science problem.”