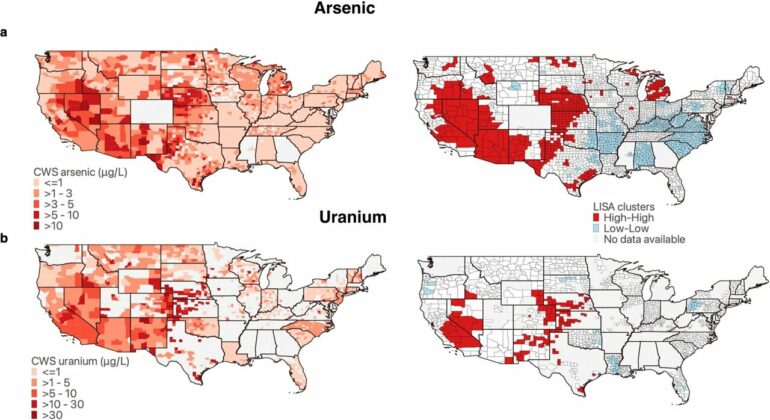 Significantly higher arsenic and uranium concentrations in public drinking water have been linked to communities with higher proportions of Hispanic/Latino, American Indian/Alaskan Native, and non-Hispanic Black residents, according to a new study at Columbia University Mailman School of Public Health.

Until now studies evaluating these associations were not possible because estimates of nationwide contaminant concentrations were not publicly available for the majority of public water systems. The findings are published in Nature Communications.

In many U.S. communities, drinking water is a significant source of exposure to arsenic and uranium, which are major environmental exposures associated with cancer, cardiovascular disease and other adverse health outcomes. The EPA sets a maximum contaminant level (MCL) of 30 µg/L for uranium and 10 µg/L for arsenic. However, EPA’s non-enforceable maximum contaminant level goal for both is 0 µg/L because there is no known safe level of exposure to either.

“Our findings are particularly relevant to public health because there is no safe level of exposure to inorganic arsenic and uranium,” noted Irene Martinez-Morata, MD, Ph.D. candidate in Environmental Health Sciences at Columbia University Mailman School of Public Health and first author. “These findings support that inequalities in public water contaminant exposures are more severe in regions with more residents from communities of color relying on public drinking water and higher concentrations of specific contaminants in source water.”

“All communities, regardless of racial/ethnic makeup, deserve access to clean, high quality drinking water,” said Anne Nigra, Ph.D., Assistant Professor of Environmental Health Sciences at Columbia University Mailman School of Public Health. “Our analysis indicates that this is not currently the case in the US. Even after accounting for socioeconomic status, communities of color have higher arsenic and uranium in their regulated public drinking water.”

The researchers used county-level, population-weighted concentration estimates of arsenic and uranium concentrations in public water systems across the U.S.—estimates based on the most recent publicly available nationwide monitoring data gathered by the U.S. Environmental Protection Agency.

Water metal concentrations were available for a total of 2,585 counties for arsenic and 1,174 counties for uranium. Parallel analyses were conducted for each of these racial and ethnic groups: non-Hispanic Black, American Indian/Alaskan Native, Hispanic/Latino, and non-Hispanic White.

“The quality of your drinking water should not be related to the racial/ethnic makeup of your community,” remarks Martinez-Morata. “Our findings can advance environmental justice initiatives by informing federal regulatory action and financial and technical support to protect communities of color.”