How chaos theory mediates between quantum theory and thermodynamics 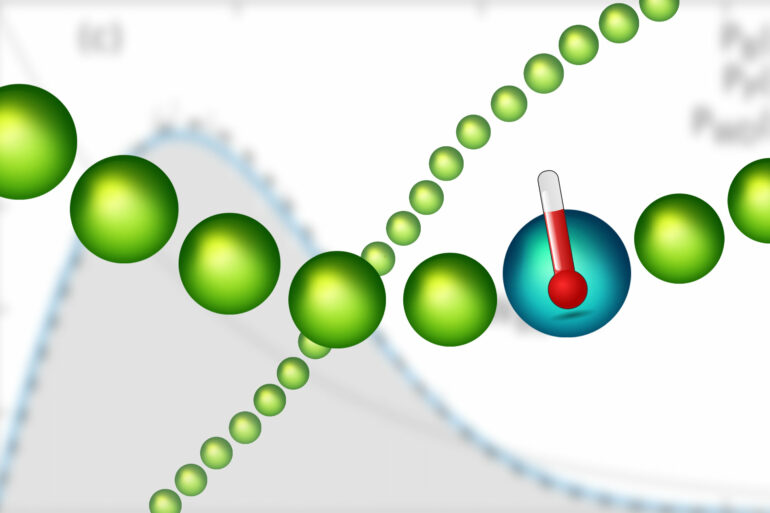 A single particle has no temperature. It has a certain energy or a certain speed—but it is not possible to translate that into a temperature. Only when dealing with random velocity distributions of many particles does a well-defined temperature emerge.

How can the laws of thermodynamics arise from the laws of quantum physics? This is a topic that has attracted growing attention in recent years. At TU Wien (Vienna), this question has now been pursued with computer simulations, which showed that chaos plays a crucial role: Only where chaos prevails do the well-known rules of thermodynamics follow from quantum physics.

Boltzmann: Everything is possible, but it may be improbable

The air molecules randomly flying around in a room can assume an unimaginable number of different states: Different locations and different speeds are allowed for each individual particle. But not all of these states are equally likely.

“Physically, it would be possible for all the energy in this space to be transferred to one single particle, which would then move at extremely high speeds while all the other particles stand still,” says Prof. Iva Brezinova from the Institute of Theoretical Physics at TU Wien. “But this is so unlikely that it will practically never be observed.”

The probabilities of different allowed states can be calculated—according to a formula that the Austrian physicist Ludwig Boltzmann set up according to the rules of classical physics. And from this probability distribution, the temperature can then also be read off: it is only determined for a large number of particles.

The whole world as a single quantum state

However, this causes problems when dealing with quantum physics. When a large number of quantum particles are in play at the same time, the equations of quantum theory become so complicated that even the best supercomputers in the world have no chance of solving them.

“In quantum physics, the entire system is described by a single large many-particle quantum state,” says Prof. Joachim Burgdörfer (TU Wien). “How a random distribution and thus a temperature should arise from this remained a puzzle for a long time.”

Chaos theory as a mediator

A team at TU Wien has now been able to show that chaos plays a key role. To do this, the team performed a computer simulation of a quantum system that consists of a large number of particles—many indistinguishable particles (the “heat bath”) and one of a different kind of particle, the “sample particle” that acts as a thermometer.

Each individual quantum wave function of the large system has a specific energy, but no well-defined temperature—just like a single classical particle. But if you now pick out the sample particle from the single quantum state and measure its velocity, you can surprisingly find a velocity distribution that corresponds to a temperature that fits the well-established laws of thermodynamics.

“Whether or not it fits depends on chaos—that is what our calculations clearly showed,” says Iva Brezinova. “We can specifically change the interactions between the particles on the computer and thus create either a completely chaotic system, or one that shows no chaos at all—or anything in between.” And in doing so, one finds that the presence of chaos determines whether a quantum state of the sample particle displays a Boltzmann temperature distribution or not.

“Without making any assumptions about random distributions or thermodynamic rules, thermodynamic behavior arises from quantum theory all by itself—if the combined system of sample particle and heat bath behaves quantum chaotically. And how well this behavior fits the well-known Boltzmann formulae is determined by the strength of the chaos,” explains Joachim Burgdörfer.

This is one of the first cases in which the interplay between three important theories has been rigorously demonstrated by many-particle computer simulations: quantum theory, thermodynamics and chaos theory.

The research is published in the journal Entropy.