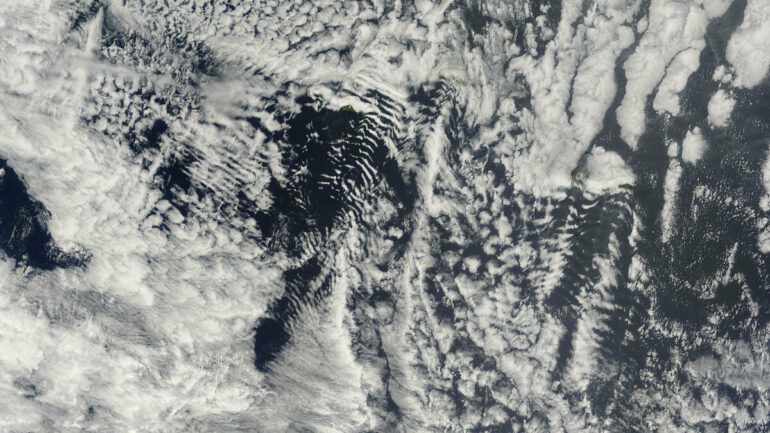 Studying the global climate—and how it’s changing—involves examining thousands of small processes, chemical mechanisms, local weather phenomena, and more. One of the many factors scientists consider when studying the changing climate is aerosols, which are small particles suspended in the air that have played a large role in our changing climate since the Industrial Revolution. Human-made aerosols come mostly from burning fossil fuels. However, aerosols also occur naturally, produced by vegetation, volcanic eruptions, and chemical reactions in the ocean.

Aerosols can both warm and cool the climate. Direct effects on the climate include either reflecting the Sun’s heat back into space or trapping heat near Earth’s surface. Aerosols can also affect the climate indirectly through their effects on cloud formation; clouds have a significant effect on climate, but the specifics aren’t well understood.

Miller et al. set out to investigate how specific marine aerosols affect cloud formation and cloud dynamics over the ocean. In general, clouds form when air becomes saturated with water vapor and the vapor starts to condense into liquid. The water droplets condense onto particles in the air, like dust or aerosols. Cloud condensation nuclei (CCN)—small particles on which water vapor condenses—can then affect the dynamics of clouds, like the size and concentration of droplets. Clouds can both cool and warm the climate, so understanding cloud dynamics is integral to understanding how the climate changes.

In the marine boundary layer, which is the area of the atmosphere in direct contact with the ocean’s surface, the most common aerosols are sea salt and sulfur-containing compounds. These sulfur-containing compounds come from chemical reactions involving dimethyl sulfide (DMS), a chemical produced by marine algae and phytoplankton. Specifically, the researchers studied a by-product of the oxidation of DMS called methanesulfonic acid (MSA), a common but little understood link between DMS and its conversion to sulfate CCN.

The scientists looked specifically at how the presence of DMS (and thus its CCN by-products) affected the size of cloud droplets and the concentration of droplets within clouds. They used data from research flights that flew 20 missions over the North Atlantic, near the Azores. The data revealed a weak but statistically significant positive correlation between the presence of DMS and the size of cloud droplets but no correlation between DMS and the number of cloud particles.

The researchers conclude that more measurements of marine biogenic gases are needed to fully understand their effect on cloud formation. They note that the limited nature of DMS and MSA data collection (occasional research flights) wasn’t building a clear picture of the complicated cloud dynamics that occur over the ocean. In addition to data collection from research flights, future investigations should simultaneously include more constant monitoring of both biogenic gases at the ocean’s surface and cloud microphysical structure; biogenic gas measurements are useful in the context of cloud microphysics only when cloud structure is being monitored simultaneously, the researchers say.