Origin of the 30,000-year-old Venus of Willendorf discovered 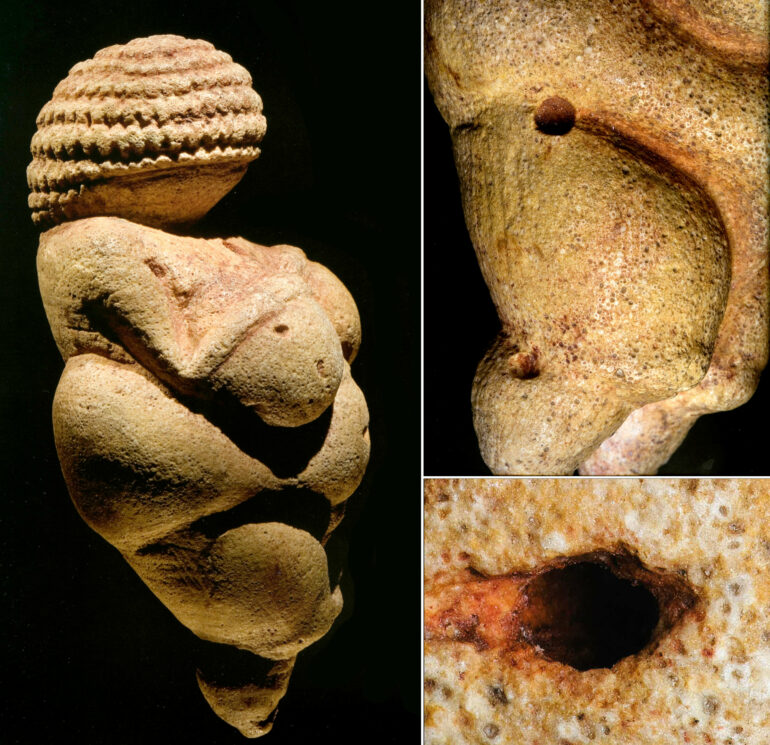 The almost 11-cm-high Venus figurine from Willendorf (Austria) is one of the most important examples of early art in Europe. It is made of a rock called oolite that is not found in or around Willendorf. A research team led by the anthropologist Gerhard Weber from the University of Vienna and the two geologists Alexander Lukeneder and Mathias Harzhauser as well as the prehistorian Walpurga Antl-Weiser from the Natural History Museum Vienna have now found out with the help of high-resolution tomographic images that the material from which the Venus was carved likely comes from northern Italy. This sheds new light on the remarkable mobility of the first modern humans south and north of the Alps. The results currently appear in Scientific Reports.

The Venus von Willendorf is not only special in terms of its design, but also in terms of its material. While other Venus figures are usually made of ivory or bone, sometimes also of different stones, oolite was used for the Lower Austrian Venus, which is unique for such cult objects. The figurine found in the Wachau in 1908 and on display in the Natural History Museum in Vienna has so far only been examined from the outside. Now, more than 100 years later, anthropologist Gerhard Weber from the University of Vienna has used a new method to examine its interior: micro-computed tomography. During several passes, the scientists obtained images with a resolution of up to 11.5 micrometers—a quality that is otherwise only seen under a microscope. The first insight gained is: “Venus does not look uniform at all on the inside. A special property that could be used to determine its origin,” says the anthropologist.

Along with the two geologists Alexander Lukeneder and Mathias Harzhauser from the Natural History Museum in Vienna, who had previously worked with oolites, the team procured comparative samples from Austria and Europe and evaluated them. A complex project: Rock samples from France to eastern Ukraine, from Germany to Sicily were obtained, sawn up and examined under a microscope. The team was supported by the state of Lower Austria, which provided funds for the time-consuming analyses.

The inside also gives information about the outside

The tomographic data from the Venus showed that the sediments were deposited in the rocks in different densities and sizes. In between there were also small remnants of shells and six very dense, larger grains, so-called limonites. The latter explains the previously mysterious hemispherical cavities on the surface of Venus with the same diameter: “The hard limonites probably broke out when the creator of the Venus was carving it,” explains Weber. “In the case of the Venus navel, he then apparently made it a virtue out of necessity.”

Another finding: The Venus oolite is porous because the cores of the millions of globules (ooides) of which it is comprised had dissolved. This is a great explanation for why the resourceful sculptor chose this material 30,000 years ago: It is much easier to work with. The scientists also identified a tiny shell remnant, just 2.5 millimeters long, and dated it to the Jurassic period. This ruled out all other potential deposits of the rock from the much later Miocene geological era, such as those in the nearby Vienna Basin.

A long way for that period

The research team also analyzed the grain sizes of the other samples. Hundreds, sometimes even thousands of grains were marked and measured with image processing programs or even manually. None of the samples within a 200-kilometer radius of Willendorf even remotely matched. The analysis finally showed that the samples from the Venus were statistically indistinguishable from samples from a location in northern Italy near Lake Garda. This is remarkable because it means that the Venus (or at least its material) started a journey from south of the Alps to the Danube north of the Alps.

“People in the Gravettian—the tool culture of the time—looked for and inhabited favorable locations. When the climate or the prey situation changed, they moved on, preferably along rivers,” explains Gerhard Weber. Such a journey could have taken generations.

One of the two possible routes from the south to the north would lead around the Alps and into the Pannonian Plain and was described in simulations by other researchers a few years ago. The other way to get from Lake Garda to the Wachau would be via the Alps. Whether this was possible more than 30,000 years ago is unclear due to the climate deterioration that began at that time. This would be a rather improbable variant if there had already been continuous glaciers at that time. However, the 730 km long path along the Etsch, the Inn and the Danube had always been below 1,000 meters above sea level, with the exception of 35 kilometers at Lake Reschen.

The statistics clearly point to northern Italy as the origin of the Venus oolite. Nevertheless, there is another interesting place for the origin of the rock. It is in eastern Ukraine, more than 1,600 kilometers linear distance from Willendorf. The samples there do not fit as clearly as those from Italy, but better than all the rest of the sample. An interesting connection here: Venus figures were found in nearby southern Russia, which are somewhat younger, but look very similar to the Venus found in Austria. Genetic results also show that people in Central and Eastern Europe were connected to one another at this time.

The exciting story of the Lower Austrian Venus could be continued. Only a few systematic studies have so far dealt with the existence of early humans in this time frame in the Alpine region, and with their mobility. The famous “Ötzi,” for example, only comes into play much later, namely 5,300 years ago. “We want to use these Venus results and our new Vienna research network Human Evolution and Archaeological Sciences, in cooperation with anthropology, archaeology and other disciplines, to further clarify early history in the Alpine region,” concludes Weber.