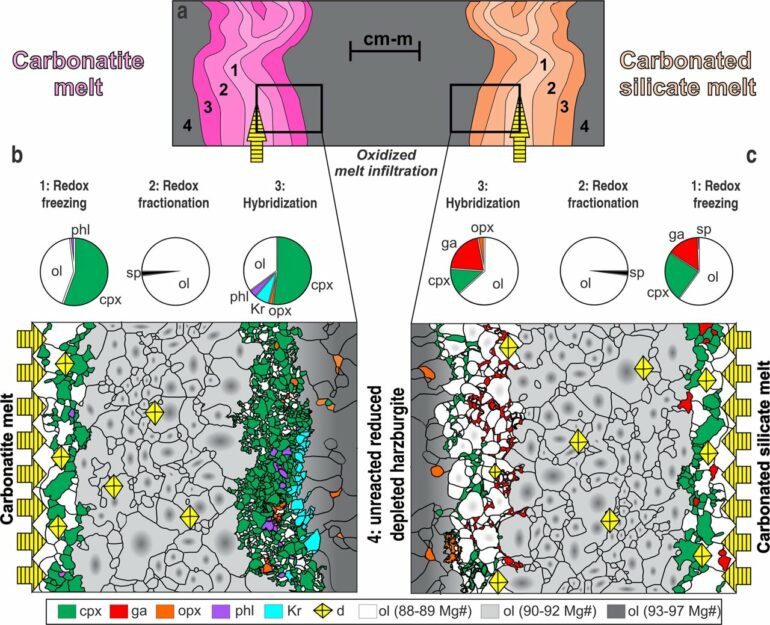 Almost all volcanic rocks come from the Earth’s upper mantle (or lava).

Volcanism, on the other hand, can have many different chemical and physical effects and can sometimes bring rare things to the surface, like diamonds and various strange rock fragments.

Many melts never make it to the surface, but they are used up deep down to make strange rocks. Because the mantle is so far away, it’s not clear why it has so much variety and rare treasure.

A study published today in Communications Earth & Environment and led by Monash University simulated the conditions under which these melts form and react with the mantle.

“Our results show that we can reproduce a large number of odd rocks, including diamond bearing rocks, in the laboratory,” said lead study author Dr. Zsanett Pintér, from the Monash University School of Earth, Atmosphere and Environment.

“We thus managed to recreate Earth’s heterogeneous mantle in our laboratory,” she said.

The study, which also involved researchers from Macquarie University and ANU observes that diamonds formed in metasomatic rocks match the nature of rock fragments recovered from volcanic eruptions and proceeds to explain why.

“So even though diamond formation is not super rare in Earth’s mantle, bringing it to the surface in specific types of rock is a rather peculiar process that isn’t met often in Earth’s long 4.5-billion-year history,” said Dr. Pintér.

“During our experiments, we found several strange rocks that we had not expected to find at all related to diamond formation,” she said.

“All of these strange rocks formed at the same time, even though it was previously thought they revealed different, unrelated histories, like being made by a lot of melting, subduction or never linked to diamonds previously.”

The experiments showed that diamonds could be made when melts mixed with other rocks in the deep. The research also explained why diamonds had strange and exotic pieces in them.

“We don’t know what else could be written in rocks,” Dr. Pinter said.