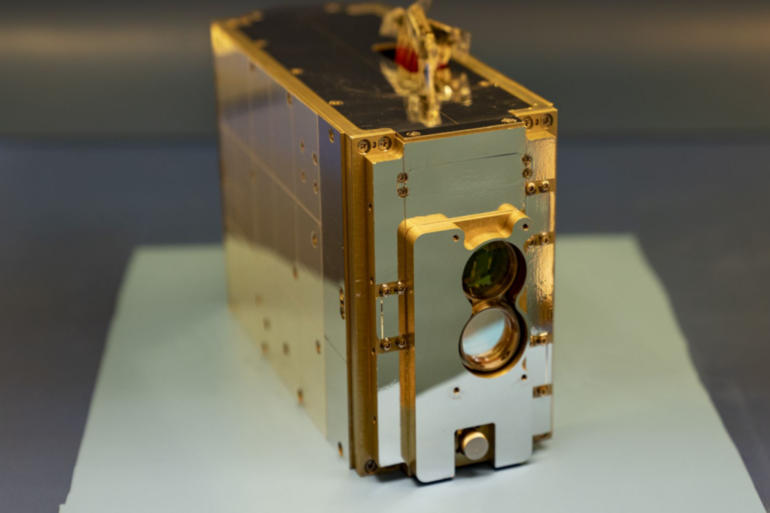 In May 2022, the TeraByte InfraRed Delivery (TBIRD) payload onboard a small CubeSat satellite was launched into orbit 300 miles above Earth’s surface. Since then, TBIRD has delivered terabytes of data at record-breaking rates of up to 100 gigabits per second—100 times faster than the fastest internet speeds in most cities—via an optical communication link to a ground-based receiver in California.

This data rate is more than 1,000 times higher than that of the radio-frequency links traditionally used for satellite communication and the highest ever achieved by a laser link from space to ground. And these record-setting speeds were all made possible by a communications payload roughly the size of a tissue box.

MIT Lincoln Laboratory conceptualized the TBIRD mission in 2014 as a means of providing unprecedented capability to science missions at low cost. Science instruments in space today routinely generate more data than can be returned to Earth over typical space-to-ground communications links. With small, low-cost space and ground terminals, TBIRD can enable scientists from around the world to fully take advantage of laser communications to downlink all the data they could ever dream of.

Designed and built at Lincoln Laboratory, the TBIRD communications payload was integrated onto a CubeSat manufactured by Terran Orbital as part of NASA’s Pathfinder Technology Demonstrator program. NASA Ames Research Center established this program to develop a CubeSat bus (the “vehicle” that powers and steers the payload) for bringing science and technology demonstrators into orbit more quickly and inexpensively.

Weighing approximately 25 pounds and the size of two stacked cereal boxes, the CubeSat was launched into low-Earth orbit (LEO) aboard Space X’s Transporter-5 rideshare mission from Cape Canaveral Space Force Station in Florida in May 2022. The optical ground station is located in Table Mountain, California, where most weather takes place below the mountain’s summit, making this part of the sky relatively clear for laser communication. This ground station leverages the one-meter telescope and adaptive optics (to correct for distortions caused by atmospheric turbulence) at the NASA Jet Propulsion Laboratory Optical Communications Telescope Laboratory, with Lincoln Laboratory providing the TBIRD-specific ground communications hardware.

“We’ve demonstrated a higher data rate than ever before in a smaller package than ever before,” says Jade Wang, the laboratory’s program manager for the TBIRD payload and ground communications and assistant leader of the Optical and Quantum Communications Technology Group. “While sending data from space using lasers may sound futuristic, the same technical concept is behind the fiber-optic internet we use every day. The difference is that the laser transmissions are taking place in the open atmosphere, rather than in contained fibers.”

From radio waves to laser light

Whether video conferencing, gaming, or streaming movies in high definition, you are using high-data-rate links that run across optical fibers made of glass (or sometimes plastic). About the diameter of a strand of human hair, these fibers are bundled into cables, which transmit data via fast-traveling pulses of light from a laser or other source. Fiber-optic communications are paramount to the internet age, in which large amounts of data must be quickly and reliably distributed across the globe every day.

For satellites, however, a high-speed internet based on laser communications does not yet exist. Since the beginning of spaceflight in the 1950s, missions have relied on radio frequencies to send data to and from space. Compared to radio waves, the infrared light employed in laser communications has a much higher frequency (or shorter wavelength), which allows more data to be packed into each transmission. Laser communications will enable scientists to send 100 to 1,000 times more data than today’s radio-frequency systems—akin to our terrestrial switch from dial-up to high-speed internet.

From Earth observation to space exploration, many science missions will benefit from this speedup, especially as instrument capabilities advance to capture larger troves of high-resolution data, experiments involve more remote control, and spacecraft voyage further from Earth into deep space.

However, laser-based space communication comes with several engineering challenges. Unlike radio waves, laser light forms a narrow beam. For successful data transmission, this narrow beam must be pointed precisely toward a receiver (e.g., telescope) located on the ground. And though laser light can travel long distances in space, laser beams can be distorted because of atmospheric effects and weather conditions. This distortion causes the beam to experience power loss, which can result in data loss.

For the past 40 years, Lincoln Laboratory been tackling these and related challenges through various programs. At this point, these challenges have been reliably solved, and laser communications is rapidly becoming widely adopted. Industry has begun a proliferation of LEO cross-links using laser communications, with the intent to enhance the existing terrestrial backbone, as well as to provide a potential internet backbone to serve users in rural locations.

“With the expanding interest and development in space-based laser communications, Lincoln Laboratory continues to push the envelope of what is possible,” says Wang. “TBIRD heralds a new approach with the potential to further increase data rate capabilities; shrink size, weight, and power; and reduce lasercom mission costs.”

One way that TBIRD aims to reduce these costs is by utilizing commercial off-the-shelf components originally developed for terrestrial fiber-optic networks. However, terrestrial components are not designed to survive the rigors of space, and their operation can be impacted by atmospheric effects. With TBIRD, the laboratory developed solutions to both challenges.

All these hardware components underwent shock and vibration, thermal-vacuum, and radiation testing to inform how the hardware might fare in space, where it would be subject to powerful forces, extreme temperatures, and high radiation levels. When the team first tested the amplifier through a thermal test simulating the space environment, the fibers melted. As Wang explains, in vacuum, no atmosphere exists, so heat gets trapped and cannot be released by convection. The team worked with the vendor to modify the amplifier to release heat through conduction instead.

Walmart Black Friday deals are live: get this 58-inch 4K TV on sale for just $298

In CompaniesGamingRoboticsSmartphones
on 14 November 20202 min read

To deal with data loss from atmospheric effects, the laboratory developed its own version of Automatic Repeat Request (ARQ), a protocol for controlling errors in data transmission over a communications link. With ARQ, the receiver (in this case, the ground terminal) alerts the sender (satellite) through a low-rate uplink signal to re-transmit any block of data (frame) that has been lost or damaged.

“If the signal drops out, data can be re-transmitted, but if done inefficiently—meaning you spend all your time sending repeat data instead of new data—you can lose a lot of throughput,” explains TBIRD system engineer Curt Schieler, a technical staff member in Wang’s group. “With our ARQ protocol, the receiver tells the payload which frames it received correctly, so the payload knows which ones to re-transmit.”

Another aspect of TBIRD that is new is its lack of a gimbal, a mechanism for pointing the narrow laser beam. Instead, TBIRD relies on a laboratory-developed error-signaling concept for precision body pointing of the spacecraft. Error signals are provided to the CubeSat bus so it knows how exactly to point the body of the entire satellite toward the ground station. Without a gimbal, the payload can be even further miniaturized.

“We intended to demonstrate a low-cost technology capable of quickly downlinking a large volume of data from LEO to Earth, in support of science missions,” says Wang. “In just a few weeks of operations, we have already accomplished this goal, achieving unprecedented transmission rates of up to 100 gigabits per second. Next, we plan to exercise additional features of the TBIRD system, including increasing rates to 200 gigabits per second, enabling the downlink of more than 2 terabytes of data—equivalent to 1,000 high-definition movies—in a single five-minute pass over a ground station.”