Particle physics in a humble glass chip: How quantum optics illuminates the nature of the quark 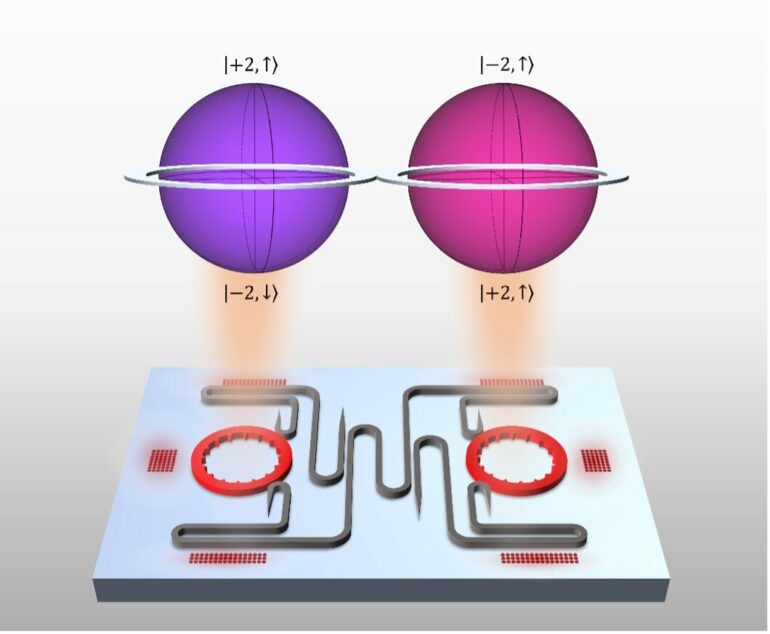 Scientists from the University of Rostock, Germany were able to recreate fundamental physical properties from the realm of elementary particle physics in a photonic system. The results are published in Nature Physics.

In their fundamental research, experimental physicists routinely bring giant yet intricate machinery to bear: Particle accelerators of enormous size smash together microscopic particles at velocities close to the speed of light, releasing unimaginable amounts of energy. In the remains of these collisions, scientists search for signatures of the fundamental forces of the universe.

Since the 1970s, a veritable zoo of particles was discovered and organized into the standard model of particle physics. Among them are quarks, the elementary building blocks of protons and neutrons. These unusual particles obey their own, quite idiosyncratic, properties that set them apart from any other form of matter. For instance, while there is only one kind of electric charge, that can be positive or negative, the behavior of quarks underlies completely different physical laws.

Prof. Stefan Scheel, head of the research group quantum optics of macroscopic systems at the University of Rostock explains, “Next to their electric charge, quarks come along with their own color charge: red, green, or blue. This, of course, has nothing to do with the colors found in a rainbow.”

It is due to this peculiar behavior that individual quarks stubbornly evade of any direct observation. Recently, the group of German scientists managed to study the fundamental symmetries of quarks by preparing light in an analogous configuration.

Prof. Alexander Szameit, head of the research group experimental solid-state optics at the University of Rostock, describes the experimental approach, “Using high-intensity laser pulses, we inscribe circuits for light in a humble piece of glass. In such photonic chips, complex phenomena can be modeled, the color charge of quarks being just one of them.”

In order to simulate this charge, the scientists from Rostock had to harness the exotic properties of quantum light. Particles of light (so called photons), are not only able to exist in several places at the same time, but an arbitrary number of them can also exist at exactly the same place.

“In this way, so-called holonomies can be designed when photons propagate through the photonic circuits. These abstract objects are usually the playing field of mathematicians. But, as it turns out, they describe the possible symmetries of a quantum system as well and have a few very interesting properties. For instance, they do not depend on the time that passes, a rarity in physics,” says Vera Neef, one of the leading authors of the work, as her Ph.D. revolves around the novel field of holonomic quantum optics.

The second leading author, Julien Pinske, who in his Ph.D. studies holonomies from the viewpoint of theoretical physics, elaborates, “In order to simulate the three different color charges, it was necessary to design a three-dimensional holonomy. So far only photons do the trick, and this goes beyond our everyday intuition of nature.”

Looking forward from their first experimental realization of this effect, the group of scientists anticipates deeper insights into the fascinating physics of the quark. Beyond the study of such fundamental physics, the reported results might prove useful in the design of future quantum technologies, including quantum computers. There, holonomies might turn out to be the crucial ingredient on which quantumness can be made resilient enough for commercial use.

Unveiling bulk and surface radiation forces in a dielectric liquid


Citation:
Particle physics in a humble glass chip: How quantum optics illuminates the nature of the quark (2022, December 1)