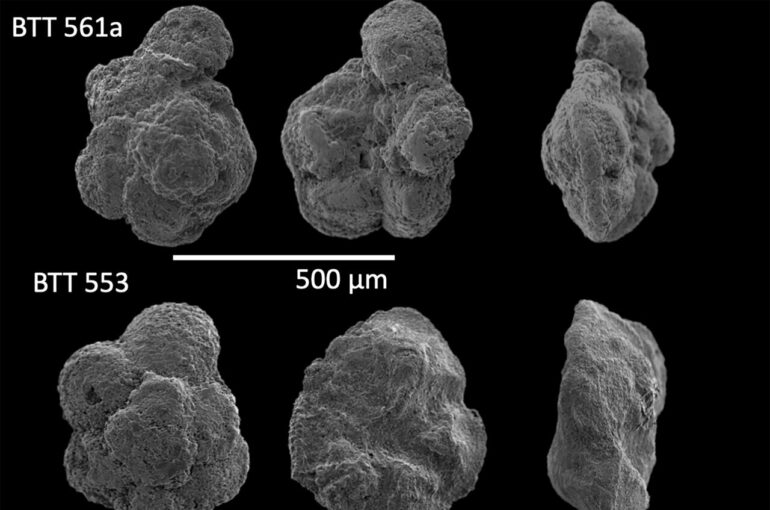 Nearly 100 million years ago, the Earth experienced an extreme environmental disruption that choked oxygen from the oceans and led to elevated marine extinction levels that affected the entire globe.

Now, in a pair of complementary new studies, two Northwestern University-led teams of geoscientists report new findings on the chronology and character of events that led to this occurrence, known as Ocean Anoxic Event 2 (OAE2), which was co-discovered more than 40 years ago by late Northwestern professor Seymour Schlanger.

By studying preserved planktonic microfossils and bulk sediment extracted from three sites around the world, the team collected direct evidence indicating that ocean acidification occurred during the earliest stages of the event, due to carbon dioxide (CO2) emissions from the eruption of massive volcanic complexes on the sea floor.

In one of the new studies, the researchers also propose a new hypothesis to explain why ocean acidification led to a strange blip of cooler temperatures (dubbed the “Plenus Cold Event”), which briefly interrupted the otherwise intensely hot greenhouse period.

By analyzing how an influx of CO2 from volcanoes affected ocean chemistry, biomineralization and climate, the researchers hope to better understand how today’s Earth is responding to an increase of CO2 due to human activities, which potentially could lead to solutions for adapting to and mitigating anticipated consequences.

A paper, with findings from deep-sea cores, including a newly drilled site near southwest Australia, will be published on Thursday (Jan. 19) in the journal Nature Geoscience. A complementary paper detailing findings from ancient malformed microfossils was published on Dec. 13, in the Nature journal Communications Earth & Environment.

“Ocean acidification and anoxia resulted from massive CO2 release from volcanoes,” said Northwestern’s Brad Sageman, a senior co-author of both studies. “These major CO2 emission events in Earth’s history provide the best examples we have of how the Earth system responds to very large inputs of CO2. This work has fundamental applicability to our understanding of the climate system, and our ability to predict what will happen in the future.”

“Based on isotopic analyses of the element calcium, we propose a possible explanation for the Plenus Cold Event, which is that a slowdown in biocalcification rates due to ocean acidification allowed alkalinity to accumulate in seawater,” said Northwestern’s Andrew Jacobson, a senior co-author of both studies. “Increased alkalinity led to a drawdown of CO2 from the atmosphere. It could very well be the case that such cooling is a predictable—but transitory—consequence of warming. Our results for OAE2 provide a geological analog for ocean alkalinity enhancement, which is a leading strategy for mitigating the anthropogenic climate crisis.”

Experts on climate during the Cretaceous Period and isotope geochemistry, Sageman and Jacobson are both professors of Earth and planetary sciences in Northwestern’s Weinberg College of Arts and Sciences. The two studies were led by their former Ph.D. students, Gabriella Kitch and Matthew M. Jones, who initiated this research while at Northwestern.

Based on over 40 years of study, OAE2 is one of the most significant perturbations of the global carbon cycle to have occurred on planet Earth. Researchers have hypothesized that oxygen levels in the oceans dropped so low during OAE2 that marine extinction rates increased significantly. To better understand this event and the conditions leading up to it, the researchers studied ancient organic carbon-rich and fossil-bearing layers of sedimentary rock in widely distributed outcrop sites, as well as deep-sea cores obtained by the International Ocean Discovery Program (IODP).

The sites included Gubbio, Italy (a famous area in mainland Italy that used to be a deep ocean basin), the Western Interior Seaway (an ancient seabed stretching from the Gulf of Mexico to the Arctic Ocean in North America) and a several deep-sea sites, including a new one from the eastern Indian Ocean, offshore of southwest Australia.

Deep-sea cores provide an invaluable record of conditions in parts of the paleo-oceans that were completely unknown prior to the development of ocean drilling programs. In all three cores, the researchers focused on sections from the mid-Cretaceous Period, just before the boundary of the Turonian and Cenomanian Ages, in order to reconstruct conditions leading up to OAE2.

“The challenging part of studying ocean acidification in the geologic past is that we don’t have ancient seawater,” said Jones, who is now a Peter Buck Postdoctoral Fellow at the Smithsonian Institution. “It’s extremely rare that you would find anything that resembles ancient seawater trapped in a rock or mineral. So, we have to look for indirect evidence, particularly changes in the chemistry of fossil shells and lithified sediments.”

For the study published in Communications Earth & Environment, Kitch and her co-authors focused on fossilized foraminifera, ocean-dwelling unicellular organisms with an external shell made of calcium carbonate, which were collected at the Gubbio site by an Italian collaborator, Professor Rodolfo Coccioni at the University of Urbino.

Kitch and her collaborators were drawn to the Gubbio specimens because Coccioni’s optical observations and measurements of their shells showed abnormalities, including a consistent pattern of “dwarfing,” or a decrease in overall size, coincident with the onset of OAE2.

“These are optical signs of stress,” said Kitch, who is now a Knauss Fellow at the National Oceanic and Atmospheric Administration. “We hypothesized that the stress could have been caused by ocean acidification, which then affected the way the organisms built their shells.”

To test this hypothesis, Kitch analyzed the calcium isotope composition of the fossils. After dissolving the fossilized shells and analyzing their composition with a thermal ionization mass spectrometer, the Northwestern team observed that calcium isotope ratios shifted in the malformed specimens in a way consistent with stress from acidification.

“This is the first paper to marry calcium isotopic evidence for acidification with observations of biological indicators of stress,” Sageman said. “It’s these independent biological and geochemical observations that confirm there was an impact on biomineralization during the onset of OAE2.”

For the second study, published in Nature Geoscience, Jones and his co-authors focused on deep sea cores of lithified sediments from offshore southwest Australia, which he and colleagues collected during an IODP expedition in 2017. For this piece of the puzzle, the researchers were less interested in what was in the sediment and more interested in what the sediment was noticeably lacking.

The core contains stacks of limestone, rich with calcium carbonate minerals, but is punctuated by a sudden absence of carbonate right before OAE2.

“For this time interval, we found that calcite is absent,” Jones said. “There are no carbonate minerals. This section of the core is visibly darker; it jumped right out at us. The carbonate either dissolved at the seafloor or fewer organisms were making calcium carbonate shells in the surface water. It’s a direct observation of an ocean acidification event.”

In his geochemical analyses conducted in collaboration with Professor Dave Selby at Durham University, Jones noticed that carbonate was not the only component showing significant change. Coincident with the onset of OAE2, there is also a marked shift in osmium isotope ratios that signal a massive input of mantle-derived osmium, the fingerprint of a major submarine volcanism event. This observation is consistent with the work of many other researchers, who have found evidence for the eruption of a large igneous province (LIP) preceding OAE2.

These events of massive volcanic activity occur throughout Earth history and are increasingly recognized as major agents of global change. Many LIPs were submarine, injecting tons of CO2 directly into the oceans. When CO2 dissolves into seawater, it forms a weak acid that can inhibit calcium carbonate formation and may even dissolve preexisting carbonate shells and sediments.

“Right at the onset of OAE2, osmium isotope ratios shift to really, really low values,” Jones said. “The only way that can happen is through a large igneous province eruption. That helps us establish a cause-and-effect relationship. We can see the evidence that volcanoes were really active because the osmium values crash. Then, suddenly, there’s no carbonate.”

While ocean acidification following a LIP is not necessarily surprising, the Northwestern team did uncover something unusual. Acidic conditions during OAE2 lasted much longer than other widely recognized acidification events in the ancient world. Jones posits that the lack of oxygen in ocean waters may have extended the acidification state.

“Organisms that consumed sinking plankton and organic matter in the water column during OAE2 were also respiring CO2, which contributed to the ocean acidification that was initially triggered by CO2 emission from LIP volcanic activity,” Jones said. “So, marine anoxia can be a ‘positive feedback’ on ocean acidification. That’s important because the global ocean today, in addition to having its pH levels decrease, is losing oxygen content as well. That suggests that decreases in oxygen may prolong acidification and highlights that the two phenomena are closely related.”

In Kitch’s study, she found that biology played yet another role during the event. Global warming and ocean acidification did not just passively affect foraminifera. The organisms also actively responded by reducing calcification rates when building their shells. As calcification slowed, the foraminifera consumed less alkalinity from seawater, which helped buffer the ocean’s increasing acidity. This also heightened the ocean’s ability to absorb CO2, potentially triggering the Plenus Cold Event.

“We call this phase a ‘hothouse period’ because temperatures were really, really warm,” Kitch said. “However, there is evidence for relative cooling during the OAE2 interval. No one has been able to explain why this cooling happened. Our study shows that by decreasing carbonate production in the ocean, you actually bump up alkalinity, which gives the ocean a buffering capacity to absorb CO2. The ocean suddenly has the capacity to draw down CO2 and balance carbon fluxes.”

Stabilization ‘comes with a cost’

But just because brief cooling interrupted this otherwise hothouse period, the researchers caution that the oceans’ natural ability to buffer CO2 is not the answer to current human-caused climate change. Sageman explains the scenario by comparing climate change to cancer.

“It’s like if a patient had cancer, and the cancer went away for a month,” Sageman said. “But then it came back and killed the patient. Don’t get fooled into thinking the ocean will cool us off and everything will be OK. It was cool for a tiny sliver of time.”

“Although the Earth rebounded and healed itself, extinctions in the marine realm helped achieve that,” Jacobson added. “The Earth has some stabilizing feedbacks, but they come with a cost.”