Tumultuous migration on the edge of the hot Neptune desert 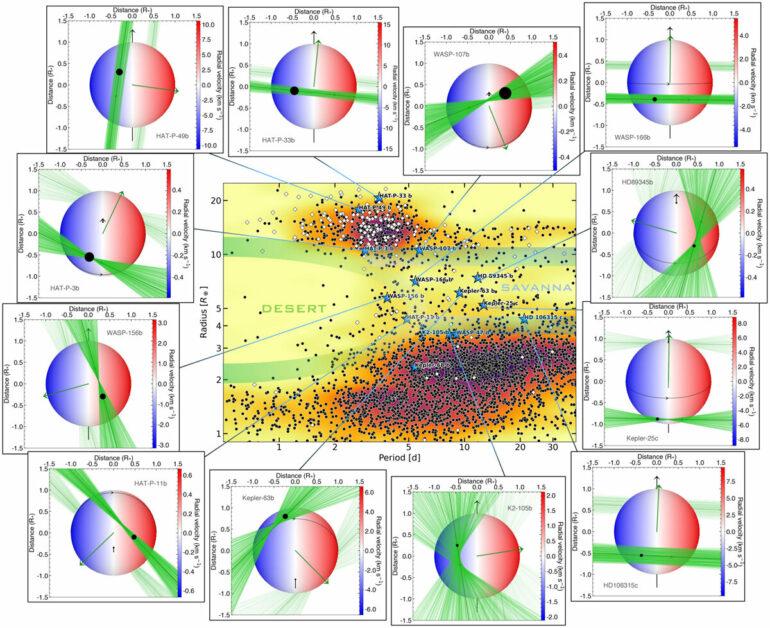 All kinds of exoplanets orbit very close to their star. Some look like the Earth, others like Jupiter. Very few, however, are similar to Neptune. Why this anomaly in the distribution of exoplanets? Researchers from the University of Geneva (UNIGE) and the National Center of Competence in Research (NCCR) have observed a sample of planets located at the edge of this hot Neptune desert to understand its creation.

Using a technique combining the two main methods of studying exoplanets (radial velocities and transits), they were able to establish that a part of these exoplanets has migrated in a turbulent way near their star, which pushed them out of the orbital plane where they were formed. These results are published in the journal Astronomy & Astrophysics.

Since the discovery of the first exoplanet in 1995, researchers have detected more than 5,000 planets in our galactic neighborhood, most of them orbiting very close to their star. If the diversity of these new worlds ranges from gas giants the size of Jupiter or Saturn to smaller planets the size of Mercury, including rocky planets larger than the Earth, gas planets the size of Neptune seem to be missing. Astronomers call this empty “box” in the distribution of close-in planets the hot Neptune desert.

“The distribution of planets close to their star is shaped by a complex interaction between atmospheric and dynamical processes, i.e., the motions of the planets over time,” comments Vincent Bourrier, assistant professor in the Department of Astronomy at the UNIGE Faculty of Science. “Today we have several hypotheses to explain this desert but nothing is certain yet and the mystery remains.”

Did these planets lose their atmosphere entirely, eroded by the intense radiation of their star? Did they migrate from their birthplace to the outer parts of the system by a different mechanism than other types of planets, preventing them from reaching the same close orbits?

In a recent work, a team of scientists from the UNIGE brings some answers by looking at the orbital architecture of the planets located at the edge of this desert. By surveying fourteen planets around this area, ranging from small planets to gas giants, the astronomers were interested in the way their orbits are oriented with respect to the axis of rotation of their star. This information makes it possible to distinguish the processes of soft migration (the planets move in the equatorial plane of their star where they were formed) from the processes of disruptive migration (the planets migrate and are pushed out of the plane where they were formed).

The researchers were able to show that most of the planets in their sample have an orbit misaligned with the stellar equator. “We found that three-quarters of these planets have a polar orbit (they rotate above the poles of their star), which is a larger fraction than for planets further away from the desert. This reflects the role of disruptive migration processes in the formation of the desert,” says Vincent Bourrier, first author.

To achieve these results, the scientists used the radial velocity method and the transit method, which are employed to study exoplanets. “Analyzing the radial velocities during the transit of a planet allows us to determine if it orbits around the stellar equator, around the poles, or if the system is in an intermediate configuration, because different architectures will produce different signatures,” explains Omar Attia, a doctoral student in the Department of Astronomy at the UNIGE Faculty of Science and second author of the study.

These two methods were combined with data obtained with the HARPS and HARPS-North spectrographs, created at UNIGE and located on the 3.6m telescope of ESO (European Southern Observatory) and TNG (Telescopio Nazionale Galileo).

The path to understand all of the mechanisms involved in the formation of the hot Neptune desert is still long. It will be necessary in particular to explore with this technique the smallest planets at the edge of the desert, difficult to access even with instruments of the last generation such as the spectrograph ESPRESSO, built by the UNIGE and installed on the largest European telescopes. It will be necessary to wait for the commissioning of the ELT, the 39-meter super telescope of ESO, planned for 2027.


Citation:
Tumultuous migration on the edge of the hot Neptune desert (2023, January 18)