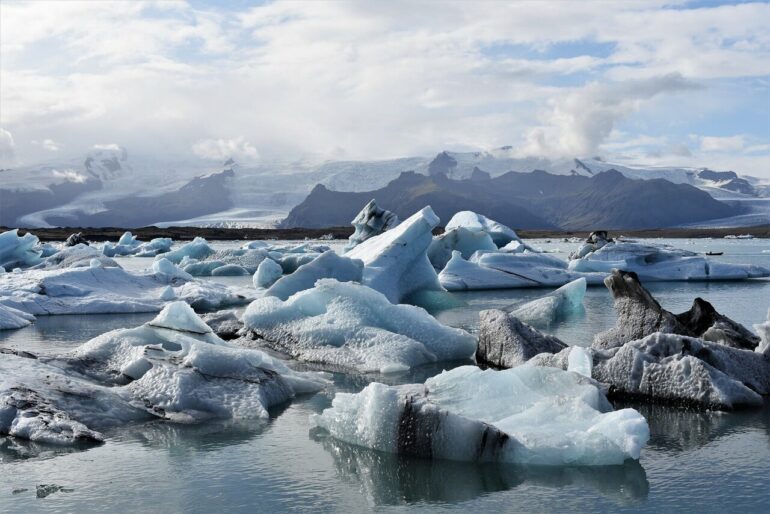 When polar seas freeze and ice forms, it is not only due to cold air chilling the surface of the water. Even more important is that warm water is prevented from rising to the surface from the depths of the ocean, due to the much lower salinity of the surface water. Researchers from the University of Gothenburg and elsewhere have described this effect in a new scientific study.

Sea ice forms in the polar regions because it gets so cold in winter. However, cold water is heavier than warm water, so the chilled water should sink and not remain on the surface. This sinking should bring the warmer water back to the surface preventing ice to form in the oceans. Researchers from the University of Gothenburg and elsewhere are now presenting an explanation as to why it is not so. The study is presented in the journal Science Advances.

“The salinity of the surface water is lower, thanks to the supply of freshwater from melting ice at the poles and precipitation to the ocean. The difference in salinity between the surface water and the deeper water is an important factor for the formation of sea ice at low temperatures at the poles. Without the difference in salinity, the water would not have become stratified, leading to continuous mixing of sea water, thus preventing the formation of ice,” says Fabien Roquet, professor of physical oceanography at the University of Gothenburg.

Difference in salinity creates a ‘lid’

The surface of the water, with its lower salinity, creates a “lid” that prevents warm water from rising to the surface. Without that lid, the cold polar temperatures would not be sufficient to freeze continuously moving warmer water.

The strength of this salinity lid is due to the unique properties of the seawater. In freshwater, water that is colder than 4 degrees Celsius has a lower density and therefore remains at the surface and freezes into ice, without mixing with water from greater depths. In the ocean, saltwater has a density that is lowest exactly at the freezing point, around -2 degrees Celsius. However, the density of the water varies much less with the temperature in cold water than when it is warmer, which is very unusual for a fluid.

“The closer you get to the poles, the more important salinity is for limiting the mixing and evening out of water temperature throughout the water,” says Fabien Roquet.

This discovery shows how important the special properties of the water molecule are for Earth’s climate. The exchange of heat between the ocean and atmosphere is affected not only by temperature differences, but also by the salinity of the ocean. Without this fact, it would be impossible for sea ice to form to any greater extent. Sea ice is itself an important factor for impeding the greenhouse effect, because it reflects sunlight away.

“With global warming, we see a decline in sea ice, which impairs the capacity of the polar seas to maintain the ‘lid’ of lower salinity that prevents carbon from rising into the atmosphere. But at the same time, warmer weather can lead to increased freshwater in the polar seas as glaciers melt and precipitation potentially increases. The difference in salinity can then increase, which may contribute to sustain sea ice formation. But it’s difficult to predict which effect will be dominant; we just have to wait and see,” says Fabien Roquet.