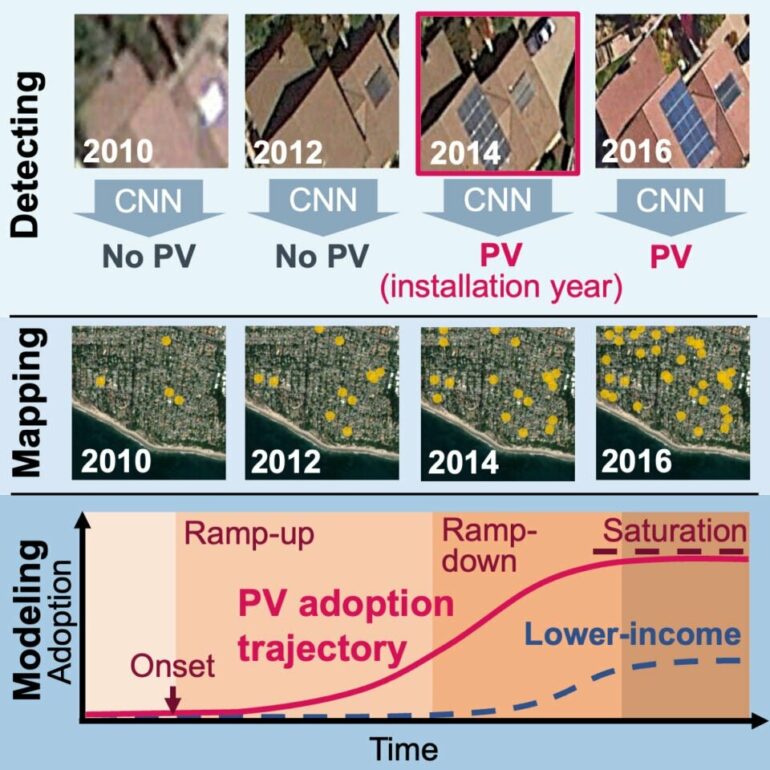 When a new consumer technology makes its debut, whether it’s a smartphone or an electric car, its adoption rate typically follows a predictable path. The first buyers come from a narrow slice of high-income users or tech enthusiasts who are willing to pay high prices. Over time, as prices fall and economies of scale kick in, sales climb sharply and the technologies become mass-market products. Eventually, the market becomes saturated, and the number of users reaches a plateau.

That hasn’t happened with residential solar power in the United States, however. Even though solar power has increased dramatically over the past decade, and the cost of photovoltaic panels has fallen significantly, lower-income communities have been much slower than high-income users to ramp up.

In a new study that used artificial intelligence to interpret a decade’s worth of satellite images, Stanford University researchers find that low-income communities were far less motivated than high-income communities by the kinds of tax incentives that state and local governments often offer. Even when lower-income communities initially installed some solar, their adoption rate plateaued at comparatively low levels.

By contrast, the researchers found, less commonly used performance-based incentives appeared to spur the adoption of solar in lower-income communities. Interestingly, the performance incentives, which reward customers based on how much solar they produce or how much less electricity they buy from the grid, appeared to have little or no impact on higher-income areas.

“This is the first study to examine the adoption of solar power across the United States in such a granular way over a long period of years,” says Ram Rajagopal, associate professor of civil and environmental engineering at Stanford and one of the paper’s senior co-authors.

“Our conclusion is a little surprising. Low-income communities didn’t accelerate their adoption of solar power,” he added. “They either didn’t start at all or they reached saturation at a very low level. By contrast, think about smartphones, which were initially so expensive that they were only for very high-income people or super tech nerds. But in less than 10 years, they became cheaper and are now owned by hundreds of millions of people.”

The study, published in today’s print issue of Joule, employed a machine-learning model—named DeepSolar++ by the researchers—that analyzed satellite images to identify where solar panels are and when they were installed in more than 400 counties across the United States. The researchers compiled images from 2006 through 2017 and then combined that data with information about each community’s demographics as well as local financial incentives for solar power.

The study was led by Zhecheng Wang, a doctoral student in Stanford’s Department of Civil and Environmental Engineering. Wang helped build DeepSolar++.

In 2018, the Stanford team published an initial study that analyzed the number of solar installations at a single point in time. That study confirmed that solar arrays were much less common in low-income communities, but it didn’t offer much insight about the trend over time. Were those communities starting later but then catching up, as had been the case with smartphones, big-screen televisions, and other new technologies?

To map the long-term trajectory, the researchers had to deal with the fact that commercial satellite imagery in the mid-2000s was low-resolution. That made it hard to recognize solar panels. The solution, Rajagopal says, was to have DeepSolar++ compare the more recent high-resolution pictures with older images of the same locations. That comparison provided enough information for the system to pick out solar panels even though the earlier images were much blurrier.

By definition, of course, lower-income families have less money to invest in solar. Even now, Rajagopal says, solar power is usually more expensive than buying electricity from the grid.

Federal and state governments have long offered financial incentives, often in the form of rebates on income or property taxes. Performance-based incentives are much fewer. In theory, those financial incentives should make solar power more appealing to lower-income households. To find out, the Stanford team used a federal database of state incentives for renewable energy to identify which kinds of incentives were available in each community.

Tax incentives impacted only upper-income communities, they found. One reason, they suspect, is that lower-income families have much lower taxes and thus benefit less from tax breaks. People who rent rather than own their homes have no property taxes at all.

From the standpoint of equity, says Rajagopal, that’s an important finding. By relying so heavily on tax breaks to spur residential solar power, governments at every level may be aggravating the solar divide between haves and have-nots.

“If you want to accelerate the adoption of solar in lower-income communities, performance-based incentives are the way to go,” says Rajagopal.

Here, the researchers observed correlations, not causation. They are unsure why performance-based incentives seem effective among lower-income communities. Possibly, Rajagopal says, the less common type of incentive may motivate the owners of apartment buildings.