A dark stream sheds new light on the life of galaxies 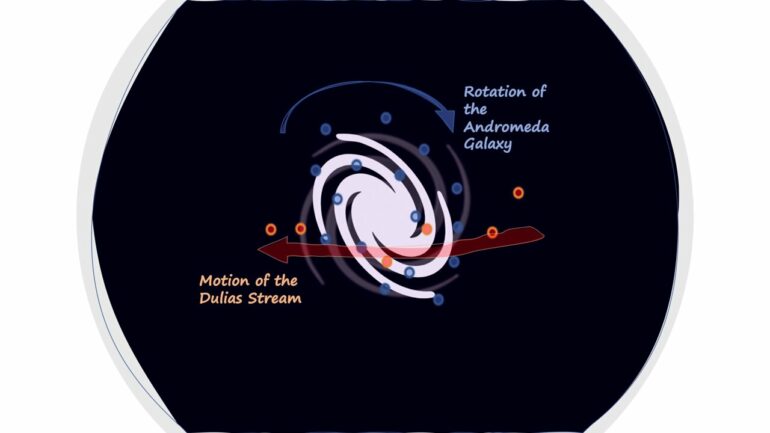 An international team of scientists led by a University of Sydney astrophysicist has discovered evidence the Andromeda galaxy is a cannibal growing through colossal intermittent feasts.

The research, which is available on the pre-print server arXiv and will be published in the Monthly Notices of the Royal Astronomical Society, builds, in part, on the unexpected findings of two honors students.

“A few years ago, we discovered that in the far outskirts of Andromeda, there was a sign in the objects orbiting it that the galaxy hadn’t been grazing, but it had eaten large quantities in two distinct epochs,” said lead author Professor Geraint Lewis from the University of Sydney.

“What this new result does is provide a clearer picture of how our local universe has come together—it is telling us that at least in one of the large galaxies, that there has been this sporadic feeding of small galaxies.”

The research findings are based on the discovery of a structure of stars, known as globular clusters, in Andromeda that originated outside the galaxy. Professor Lewis named this the Dulais Structure, drawn from the Welsh for black stream.

The Dulais Structure represents the leftovers of a colossal feeding event in the “recent” past, a dark stream lit up by star clusters orbiting unlike any others in Andromeda. It provides evidence that galaxies grow by “eating” smaller systems, and the findings are at odds with a more sedate picture of galactic growth.

“That then leads to the next question of, well, what was actually consumed? Because it doesn’t look like it was just one thing, it looks like it’s been a collection of things which are all being slowly torn apart,” said Professor Lewis. “We’ve come to realize over the last few decades that galaxies grow by eating smaller systems—so little galaxies fall in, they get eaten—it’s galactic cannibalism.”

Andromeda has the signatures of two major feeding events. Rough timescales indicate the “recent” feast took place sometime in the last 5 billion years, while the older feed was closer to 8–10 billion years ago. The universe itself is 13.8 billion years old, meaning the two separate events may have taken place while matter in the universe was in closer proximity and more densely concentrated.

“We know that the universe was featureless at its birth in the Big Bang, and today it’s full of galaxies. Were those galaxies born fully formed, or have they grown?” Professor Lewis said.

Astrophysicists like Professor Lewis are studying Andromeda to better understand how our own Milky Way has evolved. The vantage point from Earth makes viewing our galaxy difficult because we’re sitting inside it, obscuring observations, but the distance from Andromeda allows scientists the advantage of a “panoramic view.”

It is unclear how the Milky Way itself has fed, but a picture is emerging in Andromeda with a clear signature—large feasts and growth spurts. Given the Milky Way is a spiral galaxy of similar size, the research may be painting a picture of what our galaxy has done to reach its enormous size.

“What we want to know is has the Milky Way done the same, or is it different? Both of those have interesting consequences for the overall picture of how galaxies form,” Professor Lewis said. “We want to, at some level, come up with a more accurate clock to tell us when these events occurred because that’s one thing we need to include in our models of how galaxies evolve.”

He and colleagues analyzed data covering the speeds and chemistry of the globular clusters forming the Dulais Structure, providing a two-dimensional view. The next step is to understand distances, which will allow researchers to construct the history in three dimensions.

“That will then allow us to work out orbits, where things are going, and then we can start to run the clock backwards and see if we can get this coherent picture of when things fell in,” he said.

“We couldn’t name it as an object like a galaxy, because we actually do not know if the signature we see is from one big object disrupting or seven smaller objects disrupting. That’s why we sort of refer to it as a structure rather than it being a particular galaxy.”

“We got a hint that something was going on from their honors work,” he said. “You almost know what’s going to come out at the end of it, but when they come to you and say, ‘I keep getting this signal, and it’s a bit weird,’—that’s when it gets very exciting.

“It’s opened a new door in terms of our understanding. But exactly what it’s telling us I think we still have to work that one out.”


Citation:
A dark stream sheds new light on the life of galaxies (2022, November 16)