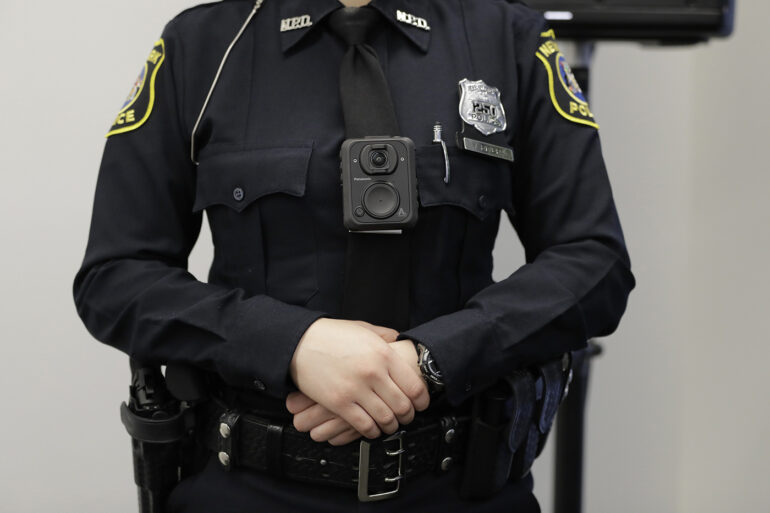 On Dec. 25, 2019, a New Haven, Connecticut, police officer approached a man whose car was parked illegally, and told him to go sit on the sidewalk.

Within just a few minutes, the situation had escalated to violence. In a video posted on YouTube by a Hartford news station, the officer can be seen slamming the man to the ground, kicking him and pulling his hair. Because the officer was wearing a body camera, it was all caught on tape, and the officer, Jason Santiago, was later charged with third-degree assault.

How do simple police-civilian interactions like this become violent so quickly?

Eric Piza, a professor of criminology at Northeastern, set out to answer that question. By analyzing hundreds of hours of Newark (New Jersey) Police Department body camera footage, Piza and his colleagues are helping to establish what factors predict when use of force occurs during officer-civilian interactions. Their work has wide-ranging implications for how the police force should be trained.

Now, all uniformed Newark police officers are required to wear body cameras that collect thousands of hours of footage.

Of course, Piza sees it as thousands of hours of data that can help us better understand how officers and citizens interact. Two years ago, he and his team partnered with Newark police to analyze body camera footage that featured use of force, which they define as “any forceful physical action towards a suspect” but does not include handcuffing.

Using footage from 91 officer-citizen encounters recorded between December 2017 and December 2018, Piza “coded” the content, cutting the footage into five-second intervals and recording different variables. These included calm commands, shouted commands, noncompliance by the citizen, “verbally antagonistic behavior” on the part of the citizen or the officer, and different degrees of use of force. The team also recorded other variables like whether the encounter took place inside or outside, time of day and accents. Unlike previous research, theirs took the timing into account: how quickly were these encounters escalating?

Their findings show that police actions, or “authority maintenance variables,” were more predictive of use of force than civilian actions. In fact, Piza found that the biggest predictor of use of force was an officer issuing a command, with use of force often occurring immediately following a calm command.

Officers arriving as backup was also predictive of use of force; Piza suggests that this is because officers choose to wait for backup before using force, or that additional officers created a more chaotic situation.

Civilian actions, like resisting arrest, not complying with a verbal command or trying to flee the scene, were also predictive, but not as strongly as police actions. “Based upon the analysis, the officer actions were more predictive,” Piza says.

The research could have far-reaching consequences for police policy and training, Piza says. Using respectful tones, explaining things clearly, and responding to questions are all tactics that lessen the probability of use of force.

“This is clear to say that officers are using force quickly to deal with suspect noncompliance rather than resorting to some different, more forceful verbal tactics,” Piza says. “Any retraining of Newark Police Officers around the use of force should really emphasize those types of activities.”