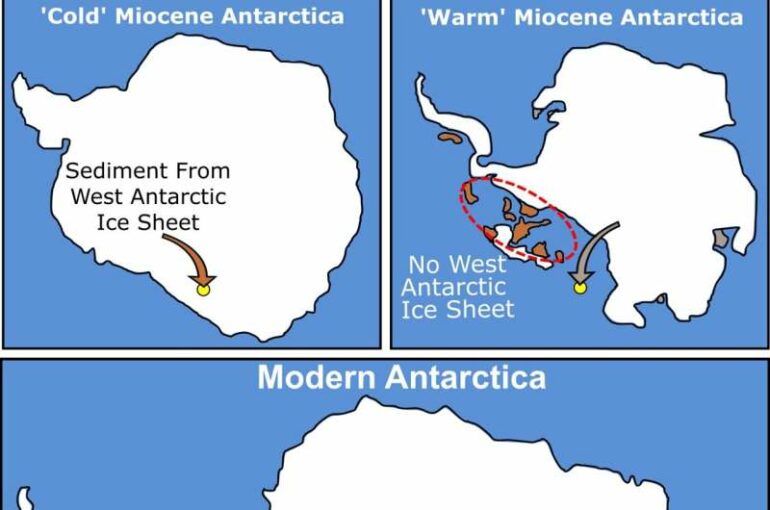 Insights into how the West Antarctic Ice Sheet responded to a warmer climate millions of years ago could improve predictions of its future.

The new study, led by Imperial College London scientists, examined the status of Antarctic ice sheets during the Early Miocene, around 18-16 million years ago, which experienced both warm and cold periods. During warmer periods, sea level rose by up to 60 meters—the equivalent of melting all the ice currently on the Antarctic continent.

However, the contributions of the larger East Antarctic Ice Sheet (EAIS) and the smaller West Antarctic Ice Sheet (WAIS) to past sea-level rise was uncertain. Now, in a paper published today in Nature, Imperial scientists working as part of the International Ocean Discovery Program show that the extent of the WAIS was larger than thought during colder periods in the Miocene.

This means it contributed a lot more to sea-level rise events millions of years ago than previously thought. This insight will help researchers more accurately predict the future of the WAIS as the world warms.

Before, it was thought that the WAIS was relatively small before the late Miocene, around 10 million years ago, and that sea-level rise was mostly the result of melting of the larger East Antarctic Ice Sheet (EAIS), potentially completely during the warmest periods of the last 23 million years. However, while geological records show large sea level rise events, ice sheet models suggest parts of the EAIS remained even during the warmest periods of the Miocene, around 23-5 million years ago.

Lead author Jim Marschalek, from the Department of Earth Science and Engineering at Imperial, is completing his Ph.D. with the Science and Solutions for a Changing Planet Doctoral Training Partnership. He said: “Our observations from the past help inform predictions of how the West Antarctic Ice Sheet, which is considered particularly vulnerable to rapid ice mass loss today, will respond under various future warming scenarios.”

The research team drilled into sediments in the Ross Sea, Antarctica, to find layers that corresponded to the coldest and warmest periods. They found evidence of material deposited by a WAIS far out to sea, showing it grew large during the coldest periods.

This was possible as more of the land surface beneath the WAIS was above sea level in the past, allowing more ice to sit on this part of the continent compared to today. Despite these geographical changes, this study shows how the WAIS could raise sea level a significant amount in the future as our planet warms.

The WAIS is today considered very vulnerable to oceanic and atmospheric warming. This new study supports that idea, showing it expanded and contracted significantly during the Miocene.

Today’s human-caused climate warming is occurring at a very fast pace. Now the geological information agrees with the models, scientists can be more confident that the models are capturing the response of the WAIS in the past, helping predict how Antarctica may respond to changes both in the short term and over several hundred to thousand years.

The results also highlight that the effects of climate change on Antarctica’s ice sheets will persist if significant action is not taken now to curb greenhouse gas emissions.

Co-author Professor Tina van de Flierdt, from the Department of Earth Science and Engineering at Imperial, said: “While Antarctica is losing mass at an accelerating rate today, projected sea level rise by the end of this century is nowhere close to the levels that we know existed in the geological past when temperatures were one, two, or three degrees warmer. Hence the past is an important window to tell us what we are committing the planet to with certain amounts of warming.

“The good news is that the large ice sheets are relatively sluggish to respond to environmental change, so we might still be able to avoid major ice loss in many areas. The bad news is that the low-lying areas of the ice sheet have a ‘tipping point’, and we do not yet fully understand where this point of no return lies.

“Keeping future warming below two degrees, and ideally to 1.5 degrees, is the target to aim for and requires emission reductions of 50 percent by 2030.”


Citation:
Study of Antarctic ice’s deep past shows it could be more vulnerable to warming (2021, December 15)