Educated women increasingly likely to have 1st baby before marriage 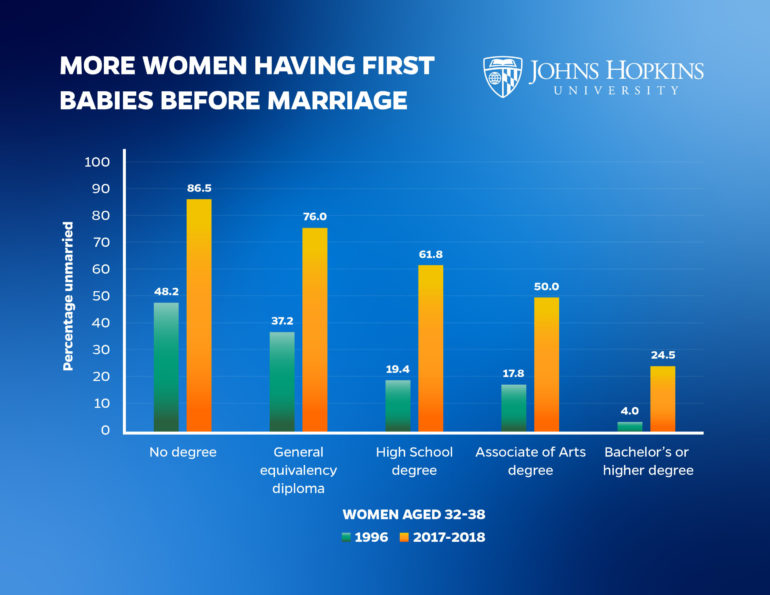 College-educated women are much more likely than ever before to have a first child outside of marriage, a new Johns Hopkins University study finds.

Women with degrees are also more likely to be married at the time of their second birth, suggesting a historic shift among the educated away from starting families with marriage to starting them with a baby. The findings by Johns Hopkins University sociologist Andrew Cherlin are published by Proceedings of the National Academy of Science.

“I project that among college-educated women currently in their thirties who will ever have a first child, 18% to 27% will be unmarried at the time of the birth,” Cherlin said. “The place of marriage in the sequence of life events for emerging adulthood may be shifting among college graduates.”

The proportion of first births outside of marriage has increased at all educational levels but the increase has been greatest among women with college degrees, he found.

In 1996 only 4% of college-educated women in their 30s had their first babies while unmarried. Twenty years later, that percentage has increased six-fold to 24.5%. Among all women in their 30s who have a first birth outside of marriage, women with college degrees are more likely to be married at the time of their second birth. College educated women are also somewhat more likely than women without bachelor’s degrees to have had the same partner for both children—in more than half of those instances of babies born outside of marriage, the women were cohabiting at the time of the birth.

“For a growing number of college-educated young adults in the U.S, their family life courses will eventually result in marriage but, for increasing numbers, marriage would follow a first birth rather than precede it,” Cherlin said. “This suggests a potential change in the role of marriage among college-educated emerging adults—although not necessarily a decline.”

Cherlin points to several likely reasons for the marked change, chiefly: money problems, including college debt and lower economic returns from a college degree, and the widespread cultural acceptance for single parenthood and unmarried couples living together.

“Young adults may postpone or forgo marriage until and unless they have attained certain economic markers such as home ownership or an income comparable to the married couples around them,” Cherlin said, adding that studies of less-educated women show that when the actual or perceived support for marriage declines, some women postpone marriage but still have a first birth and this same dynamic could be emerging among better-educated women.

Planetary scientists find evidence of solar-driven change on the moon