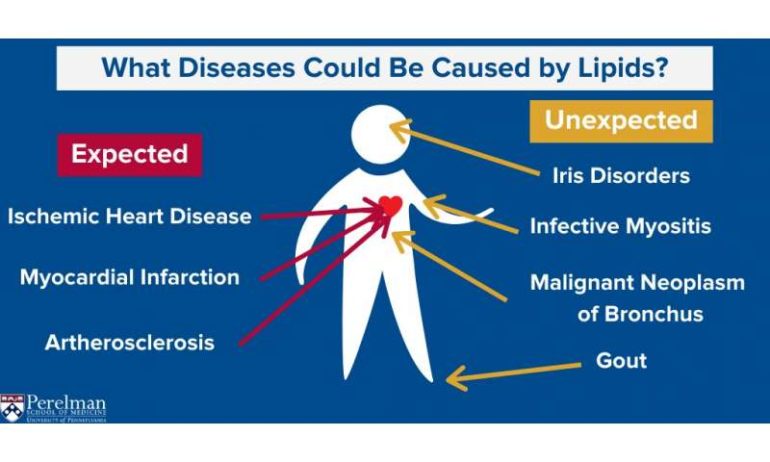 It is not shocking to anyone that fat molecules are tied to heart conditions. Lipids, a term for fatty acids and their derivatives, are the subject of countless papers when it comes to cardiovascular disease. If you’re studying lipids, there’s a good chance you’re studying it in relation to people’s hearts and blood flow.

But is that strong tie actually masking some of the other ties that lipids have to disease? Could it inadvertently blind some researchers and scientists to possibly being the cause of other diseases, such as gout?

A new analysis of genetic information available in biobanks led by researchers at the Perelman School of Medicine raises that question. When they analyzed data from the biobanks—which contain deidentified information such as DNA and disease diagnoses from thousands of real patients—the researchers found genetic links to conditions like gout, as well as digestive disorders and local infections of skin and adipose (fat) tissue. These links to lipids could, potentially, be the causes of these conditions.

“We developed an efficient framework to not only identify robustly replicating lipid genes and visualize their associations with hundreds of complex diseases from electronic health records, but to also examine whether lipids should be explored as potential causal exposures for some diseases,” said Yogasudha Veturi, Ph.D., a postdoctoral researcher in the Penn Medicine Department of Genetics, as well as the lead author of a paper published on this analysis in Nature Genetics.

Analyzing ties between lipids and diseases

In the first step of their analysis, Veturi, along with senior author Marylyn Ritchie, Ph.D., director of the Center for Translational Bioinformatics and a professor of Genetics, and their team of researchers tried to identify all possible genetic variants associated with blood lipid levels. They did this by referencing millions of genetic markers across a set of biobanks— huge repositories of genetic information—to see which ones seemed to repeat in multiple datasets using an approach called “genome-wide association study.” They also leveraged gene-expression data from an independent repository to identify new genes whose expression is genetically correlated with lipid levels using an approach called “transcriptome-wide association study.”

With 67 novel lipid-tied genes identified as being common across different biobanks, Veturi, Ritchie, and their team moved on to a second step: exploring the ties between the identified lipid genes and what diseases they might be linked to. This was accomplished through an analysis of all detected lipid-tied genes (both the newly identified ones and those previously reported), disease diagnoses from electronic health records and gene expression from an independent repository using an approach called expression-based phenome-wide association study. In doing so, they were able to identify genes not just tied to lipids, but also to certain diseases; this phenomenon of multiple ties is called “pleiotropy.”

Of course, this analysis led to some of the expected diseases in the realm of cardiovascular, endocrine and neurological disease (such as Alzheimer’s and multiple sclerosis). However, it also turned up some unexpected conditions, like blood in urine and disorders of the colored area of the eye, the iris.

If that’s a little complicated or surprising for you, think about it this way: Say you wanted to find out what sweet foods, beyond the obvious, get some of their sweetness from chocolate.

So, in this step, it would be like if you examined chocolate itself, as well as some of the types of sugars you know go into the production of chocolate. By looking at those and breaking down recipes, you find the ones you’d expect: chocolate chip cookies, cookie dough ice cream, etc. But you might also find something you didn’t know about, like mole sauce. And, because you looked at the sugar alongside the chocolate, you would recognize that maybe these recipes actually don’t require the chocolate to be sweet so much as the sugar that goes into it.

Once you make that realization, knowing you don’t have to look for chocolate at all in the recipes, you can go looking for just the combination of sugars you know that come together to make chocolate. And that’s basically what the researchers did in the third step, through a process called “Mendelian Randomization”: They simultaneously examined a host of genetic variants that happened to be associated with lipids—and determined whether lipids might be a possible cause for different diseases. By not looking directly at the association between lipids themselves and diseases, they mitigated the influence of any unintended biases that could have affected results.

This analysis was like looking at recipes in a different way to detect elements related to chocolate. While you still do find the expected, like brownies, you also discover something totally uncharted, like a pizza.This last step also led to the expected discovery that cardiovascular diseases have putative causal ties to lipids (like finding brownies have chocolate). In addition, the research team also discovered that lipid genes had causal ties to more surprising diseases like gout, excessive sodium levels in blood, neoplasms of bronchus, and skin and adipose tissue infections. Other diseases found to be linked to lipid genes from the second phase of the analysis were also found in this step.

The whole point of the process is to get a better look at the contributing parts and take a step outside the conventional thinking to maybe discover something new.

In that way, this research shows a path toward expanding the science behind disease. For example, if you performed a New England Journal of Medicine keyword search right now looking for both “gout” and “lipid,” it would return 72 results, with the top articles still focusing on cardiovascular diseases and the cardiovascular effects of treatment for patients with gout.

“Of course, lipids’ effects on cardiovascular disease are hugely important and should continue to be studied extensively,” Ritchie said. “But we hope that by exposing the wide range of effects, and potential causes that lipids could have, there’s more research done on these less-understood areas. Hopefully, it leads to some breakthroughs and future drug development.”

Intriguingly, researchers believe that the process they created to study lipids could be undertaken to examine other molecules or genes that might not be at the fore of people’s minds for certain diseases.

For instance, high levels of liver enzymes (e.g. ALT, GGT) typically point to some signs of liver damage or diseases such as non-alcoholic fatty liver disease and pancreatitis. They have also been linked to heart failure.

“It would be fascinating to see if genes leading to liver damage have influence themselves similarly on diseases of other organ systems, or if high levels of liver enzymes could lead to other diseases in the electronic health records,” said Veturi. “Once functionally validated, these discoveries can help with repurposing existing drugs to treat more than the targeted ailment.”

Blood lipids linked to cancer, along with family history