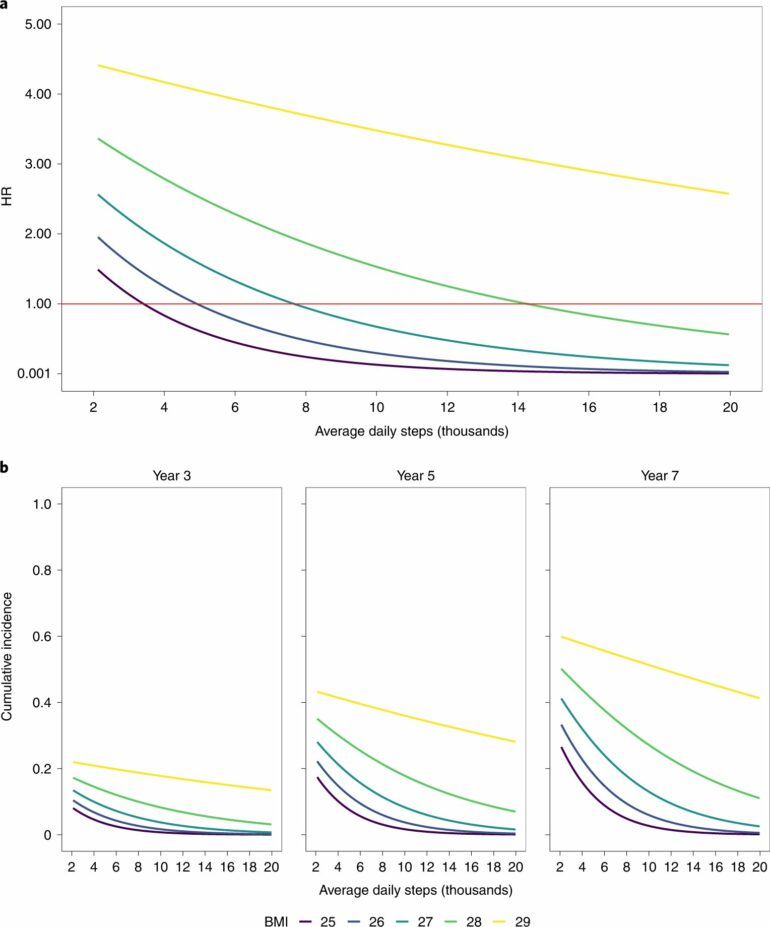 Using a wearable activity tracker to count and increase the number and intensity of steps taken daily can reduce the risk of several common chronic diseases, including diabetes, hypertension, obesity, and sleep apnea, Vanderbilt University Medical Center researchers report this week in the journal Nature Medicine.

Integrating data from commercial wearable activity trackers and health monitors into the electronic health record (EHR) may be valuable to physicians, who could use it to tailor physical activity to patients’ clinical characteristics and risk profiles, said the paper’s corresponding author, Evan Brittain, MD, MSCI, associate professor of Medicine.

The study analyzed an average of four years of activity and health data from more than 6,000 participants in the federal All of Us precision medicine research initiative who wore Fitbit activity trackers at least 10 hours a day, and who provided access to their EHRs.

The researchers compared the incidence of various diseases across the entire human phenome of observable traits and conditions in the general population to Fitbit-wearing participants in the study, which was conducted between May 30, 2018, and April 1, 2021.

Taking more than 8,200 steps per day (about 4 miles) was found to protect against obesity, sleep apnea, gastroesophageal reflux disease, and major depressive disorder. The data suggests that overweight individuals can reduce their risk of becoming obese by 64% if they increase their daily steps from 6,000 to 11,000.

Risk declined for most conditions as the number of steps increased, except for the risk of hypertension and diabetes, which did not decline further after participants reached about 8,000 to 9,000 steps per day.

Fitbit-wearing participants tend to be more active than the average adult, yet “the fact that we were able to detect robust associations between steps and … disease in this active sample suggests even stronger associations may exist in a more sedentary population,” the researchers said.

While further study is needed in a more diverse and representative population, these findings provide a necessary first step toward the development of personalized activity prescriptions, they added. Wearables can encourage patients to exercise by enabling them to set, measure and track their fitness goals.

Launched in 2018 by the National Institutes of Health, the All of Us Research Program is an historic effort to gather health data from 1 million or more Americans. To date nearly 520,000 people have agreed to participate, and more than 300,000 have provided access to their EHRs.

Former VUMC faculty member Josh Denny, MD, MS, is the program’s CEO. Paul Harris, Ph.D., professor of Biomedical Informatics, Biomedical Engineering, and Biostatistics at Vanderbilt, and a co-author of the paper, is principal investigator of the All of Us Data and Research Center.