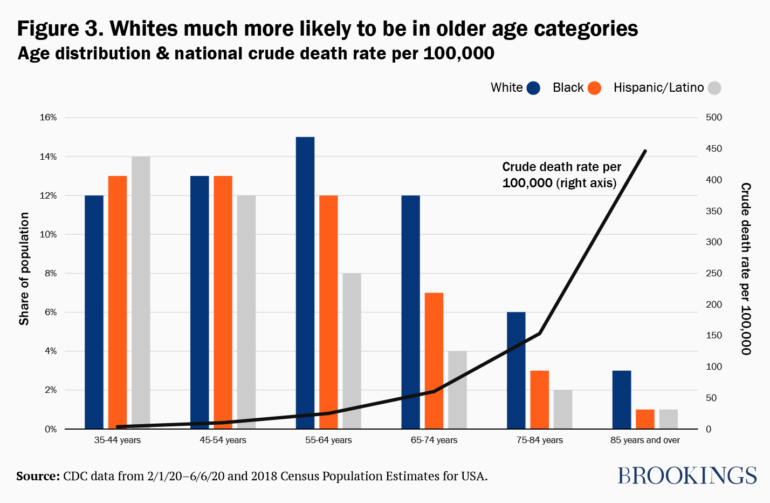 COVID-19 affected life expectancy around the world. In the U.S. life expectancy losses were much larger for Hispanic and Black males in the U.S. compared with their White counterparts, according to new research published in PNAS from Oxford’s Leverhulme Center for Demographic Science.

The Oxford team found that in 2020 life expectancy for Hispanic and Black males saw major set-backs of 4.5 years and 3.6 years respectively, compared with a reduction of 1.5 years in White males’ life expectancy.

The study shows declines in life expectancy for Hispanic males were largely accounted for by official COVID-19 deaths, whereas Black Americans also saw increases in deaths from cardiovascular disease and “deaths of despair” (i.e., suicide-, drug- and alcohol-related mortality).

“The opioid epidemic continues to plague the United States and showed no signs of slowing down during the pandemic,” says Andrea Tilstra, a postdoctoral researcher at the Leverhulme Center for Demographic Science.

Four key findings emerged from the study of COVID-19’s impact in the U.S. across racial/ethnic groups:

All groups suffered significant life expectancy losses. Deaths directly due to COVID accounted for most of these losses.The impact of the pandemic is not just about COVID-19 mortality, increases in deaths due to heart disease and “deaths of despair” also accounted for the declines in life expectancy.Working age deaths accounted for substantial losses, especially among Hispanic people.The previous life expectancy advantage for Hispanic people compared to the White population was nearly eliminated, and the already large gap between Black and White people dramatically increased.

According to the study both direct deaths from COVID-19 infection as well as indirect deaths from other causes likely disproportionately affected race/ethnic minorities during the pandemic because of the social and economic disadvantages of historically marginalized populations in the U.S..

The study found that life expectancy losses during the pandemic were driven by increases in mortality of both older and working-age populations.

Before the pandemic the Hispanic population had higher life expectancy than the White population, attributable to lower mortality from cancer, cardiovascular diseases, diabetes, chronic respiratory diseases, perinatal conditions, as well as “deaths of despair.”

“The near wipe-out of the Hispanic mortality advantage in 2020 is one of the most dramatic changes highlighted by our study. This was mainly attributable to direct COVID-19 deaths,” says Ginevra Floridi, postdoctoral fellow at Nuffield College, Oxford.

The high burden of COVID-19 mortality in the Hispanic population, especially at working ages, suggests that exposure-related social factors outweighed any protection from previously accumulated health advantages. Among Black Americans, both COVID-19 and cardiovascular deaths rose substantially more than among White people.

The study concludes, “The pandemic has affected mortality unequally. While the coronavirus itself does not discriminate, the social environment shapes risk of infection and death in ways that reflect historical inequalities.”


Citation:
Life expectancy of minorities hit hardest in the US during COVID-19 (2022, August 25)