How tissue geometry influences the movement of cells through the body 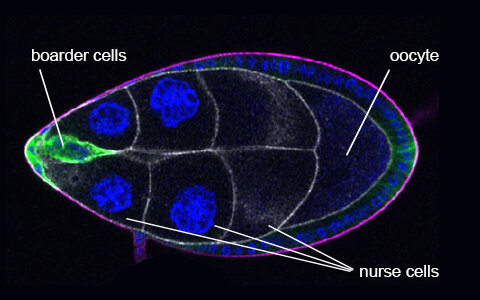 To better understand this phenomenon, a team of biologists and physicists, led by UC Santa Barbara’s Distinguished Professor Denise Montell, investigated the effect that the geometry of the biological environment has on cellular movement. Using mathematical models and fruit flies, the group discovered that the physical space holds a lot of sway over cell migration. Namely, tissue geometry can create a path of least resistance, which guides cellular motion. These insights, published in the journal Science, are a triumph for basic research and could find applications in fields as diverse as oncology, neuroscience and developmental biology.

Directed cell migration is an essential feature of biological processes, both normal and pathological. “Without directional cell migration, embryos would not develop, wounds would not heal and the immune and nervous systems would neither form nor function,” said Montell, the Duggan Professor in the Department of Molecular, Cellular, and Developmental Biology. “Yet cell migration also contributes to inflammation and cancer metastasis, so understanding the underlying mechanisms has garnered substantial interest over decades.”

Scientists have known for a long time that cells sense chemical attractants. Many thought a chemo-attractant gradient was all that was necessary for cells to migrate where they were needed. Yet reseachers are now looking increasingly at how the physical environment contributes to the way cells choose their paths. This presents a practical challenge, however, since reconstructing the geometry of a living tissue in an artificial environment is a tall order.

Montell’s team experimented with the ovaries of fruit flies—one of the earliest and best-studied models of cell migration—to tease out the contributions of multiple different factors. Within the ovary are several egg chambers consisting of 15 nurse cells and one oocyte, or developing egg cell, at one end. The nurse cells support the growth of the egg.

Around 850 follicle cells surround the nurse cells and oocyte. Of these, a group of six to eight at the tip of the egg chamber, called border cells, detached and migrate between the nurse cells to the oocyte, where they are critical in the final development of the egg.

Not only does this system provide a perfect model for studying cellular motion in general, the border cell cluster behaves very similarly to metastasizing cancer. “At first, the system might seem very obscure and arcane to pick out of the blue,” Montell admits, “but as it turns out, Mother Nature reuses things, and the mechanisms that these cells use to move are very similar, even in molecular details, to how cancer cells move.”

There are two components to the border cells’ migration. They clearly move from the anterior to the posterior of the egg chamber. However, what was less appreciated until now is that they also stay centrally located rather than moving to the chamber periphery on their journey, despite having roughly 40 different side paths they could take.

The researchers found that the chemo-attractant could not account for the choice of the central path—something else must keep the border cells along their path. In fact, when they knocked out the cells’ ability to detect the chemical signals, the researchers found that the cells still kept to the center of the egg chamber, although they no longer made it all the way to the oocyte at the opposite end.

The egg chamber is filled with many cells, which presents a stacking problem much like packing balls into a crate. Mathematicians have been working on problems like these for centuries and have found that there’s more space in areas where more cells come together. The team confirmed this by dunking the egg chamber into a fluorescent fluid that filled the gaps between the cells.

“It seems that the border cells choose the center because it’s a place where there’s a tiny bit more space,” said Montell. “What was most surprising is that the physical space is really tiny, much smaller than the objects moving through it. It’s this tiny space that makes the difference.”

Co-lead author Wei Dai, a former postdoctoral researcher in Montell’s lab, carefully studied the egg chamber under the microscope and painstakingly recreated the arrangement of cells in a 3-D model. This allowed the physicists on the project—Yuansheng Cao and Wouter-Jan Rappel from UC San Diego and Nir Gov from the Weizmann Institute of Science in Israel—to create a mathematical model of the system on which to run simulations.

Montell’s son, a technical director at Pixar Animation Studios, was then able to superimpose the results of the mathematical model onto the 3-D recreation of the egg chamber. The results supported the hypothesis that the extra bit of room between cells created an optimal path.

To ascertain that the cellar geometry really was responsible for the border cells’ path, the paper’s other lead author Xiaoran Guo, a doctoral student in Montell’s lab, looked at mutated egg chambers with 31 nurse cells, as opposed to the usual 15. In these more crowded cases, the border cells still chose a path through the area with the most cellular junctions, rather than the physical center of the egg chamber.

“The tissue geometry creates a central path of least resistance, which provides directional information equally important to that provided by chemo-attractants,” said Montell, adding that for 15 years chemical signals were thought to be the sole guidance cues.

She suspects a number of different factors underlie the cells’ behavior. While traveling, the border cells explore their surroundings by extending small projections of the cell membrane, which are about the same scale as the gaps between the nurse cells. Additionally, the nurse cells are zipped together with proteins where they touch. By traveling through the gaps where several cells meet, the border cells don’t need to break all these bonds to slip past.

The study’s results make it apparent that scientists need to consider the influence of the physical environment for all kinds of instances where cells migrate through tight spaces; for example, the development of the brain or the movement of immune cells through lymph nodes and tumors.

“Getting immune cells into the tumor can be a challenge, and maybe part of that is this tissue geometry challenge,” Montell said. “Who would have thought that what we really need to be doing is perhaps loosening up the tumor to help the immune cells get in. These findings add a new concept to the way we think about what cells are attracted to and how they move around.”


Citation:
How tissue geometry influences the movement of cells through the body (2020, November 20)
retrieved 20 November 2020
from https://phys.org/news/2020-11-tissue-geometry-movement-cells-body.html