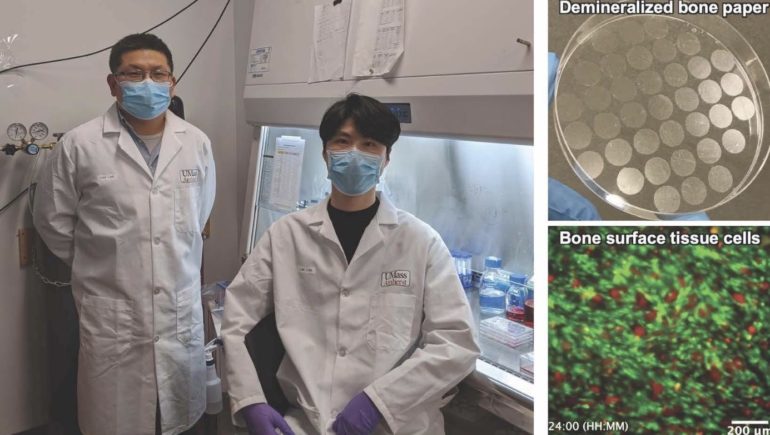 The team has developed a biodegradable, nanofiber-based implant, or scaffold, whose design could better regenerate bone by effectively guiding the migration of recuperative cells to the injury site. When implanted in rats with bone defects, the cylindrical scaffold promoted the regeneration of bone that was denser, more voluminous and more like the surrounding tissue than that achieved by many other state-of-the-art designs.

The implant spurred regeneration even without the aid of externally sourced stem cells or so-called growth factors, which help promote healing but can also introduce regulatory complications and side effects that range from inflammation to unchecked tissue formation.

“So far, we haven’t found any scaffolds that can perform better than ours,” said Jingwei Xie, professor of surgery at UNMC and courtesy professor of mechanical and materials engineering at the University of Nebraska–Lincoln. “The structure is the key.”

That signature structure stems from a recent engineering breakthrough, spearheaded by Xie, that has transformed a promising but limited two-dimensional approach into a 3D wonder.

Prior to it, Xie said, many labs were developing 2D implants made from nanofibers that were aligned to form pores. Ideally, the thinking went, bone marrow stem cells would infiltrate those pores and eventually form tissues with an architecture similar to the native, adjacent bone. But engineers were often struggling to craft pores large or organized enough for cells to consistently pass through and subsequently form the tendrils of tissue that make up bone.

So, inspired by a high school math concept, Xie set out to fabricate 3D scaffolds with larger, less haphazard, more navigable pores. The concept, called the solid of revolution, shows how any 2D curve—a rectangle, a triangle, a circle—can be rotated around an axis to form a mathematical solid. Rotating a rectangle forms a cylinder, for instance, whereas a triangle creates a cone and a circle makes a sphere.

Xie’s team applied the principle by taking a rectangular, millimeter-scale mat of stacked nanofibers, using heat to fix one end together like the spine of a book, then submerging the mat in a solution that expanded those fibers. Eventually, the loose end fanned around to form a cylinder whose nanofibers, and associated pores, radiated out from the center like the spokes of a wheel.

The researchers suspected that the radial layout would encourage various types of cells from all around the injury site to migrate toward its center, forming networks of tissue in the process. To test it, they embedded the radial scaffolds into divots of missing bone in the upper skulls of rats, assessing the regrowth after four and eight weeks.

At both time points, the radial scaffolds had regenerated bone that covered substantially more of the injury sites than in a control group and a group implanted with collagen sponges, a commonly used implant.

“We found that the radially aligned nanofibers can really enhance the bone regeneration in this scenario, especially with the cranial bone,” Xie said. “The first four weeks, especially, we saw a significant difference. It can begin promoting bone regeneration within a very short timeframe.”

The regenerated bone featured more minerals, such as calcium, essential to healthy bone formation. It was markedly denser and thicker, meaning it could help address the symptoms of osteoporosis. It grew in a radial alignment very similar to the scaffold’s, suggesting that the cells were, in fact, following the pores. And when European colleagues ran simulations of mechanical stress based on the resulting growth, the regenerated bone’s profile paralleled that of healthy cranial bone, hinting that the former might withstand compressive forces about as well as the latter.

On top of all that, bone marrow cells that were cultured on the team’s scaffold boasted naturally higher levels of multiple growth factors, including bone morphogenetic protein 2, or BMP-2—a form of which has been used in combination with collagen sponges to stimulate bone growth. Other emerging regenerative approaches—3D-printed scaffolds, aerogels, injectable hydrogels—often incorporate externally sourced BMP-2, too. Even so, those put to the test in rats have failed to stimulate growth as well as the Nebraska team’s design, Xie said.

The promise of a biodegradable implant that can stimulate such growth on its own, sans any external biological agents, could smooth its path toward eventually earning approval from the U.S. Food and Drug Administration, he said. Also working in its favor: The team fabricated the implant from a polyester already widely used in biomedical devices approved by the FDA.

If it does eventually translate to a clinical setting, the implant could prove an appealing alternative to more traditional approaches, Xie said. Those include allografts, which consist of implanting bone fragments from donors, and autografts, which entail harvesting a segment of bone from one’s own body and transplanting it to the injury site. The latter requires multiple surgeries and, among other issues, can reduce the functionality of whatever bone is harvested.

“Eventually, the idea is (that) maybe we can generate a product that is basically just the cylinder scaffold, focusing mainly on neurosurgery applications,” he said. “Because in a lot of neurosurgery, they need to drill a hole on the skull before they perform the surgery. And afterward, they need to fix that hole.”

To help get their design from the bench to the bedside, Xie and his colleagues are now training their eyes on large-animal trials and experiments involving the aptly named long bones—the femur, the clavicle and the like. And they’re looking to further refine what already sets it apart.

“We’re still trying to optimize the structure,” Xie said. “Right now, it can enhance bone regeneration, but I think we still can improve it in certain ways.”

The researchers recently detailed their findings in the journal Science Advances.