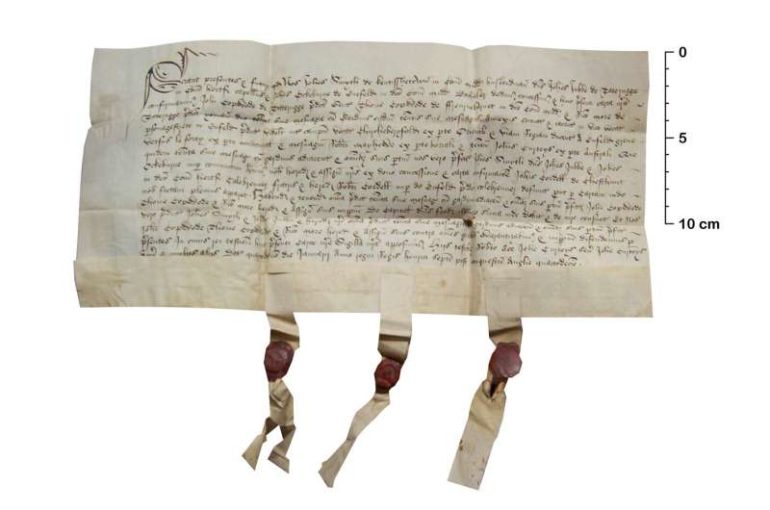 Experts have identified the species of animals used for British legal documents dating from the 13th to 20th century, and have discovered they were almost always written on sheepskin, rather than goatskin or calfskin vellum.

This may have been because the structure of sheepskin made attempts to remove or modify text obvious.

Sheep deposit fat in-between the various layers of their skin. During parchment manufacture, the skin is submerged in lime, which draws out the fat leaving voids between the layers. Attempts to scrape off the ink would result in these layers detaching—known as delamination—leaving a visible blemish highlighting any attempts to change any writing.

Sheepskin has a very high fat content, accounting for as much as 30 to 50 percent, compared to 3 to 10 percent in goatskin and just 2 to 3 percent in cattle. Consequently, the potential for scraping to detach these layers is considerably greater in sheepskin than those of other animals.

The continuing use of sheepskin over goat or calfskin in later centuries was likely influenced by their greater availability and lower cost.

The work was carried out by academics from the University of Exeter and Universities of York and Cambridge.

Dr. Sean Doherty, an archaeologist from the University of Exeter who led the study, said: “Lawyers were very concerned with authenticity and security, as we see through the use of seals. But it now appears as though this concern extended to the choice of animal skin they used too”

Because they are so durable, millions of old legal documents survive in British archives and private collections, but they are often neglected because of their supposed lack of historic value. Many were discarded, burnt, or even repurposed into lamp shades during the 20th century after the Land Registry Act of 1925 meant they didn’t need to be kept.

Until now so little was known about these documents, many were incorrectly catalogued as calfskin vellum, when they were actually made of sheepskin parchment.

Dr. Doherty said: “The text written on these documents is often considered to be of limited historic value as the majority is taken up by formulaic rubric. However modern research techniques mean we can now not only read the text, but the biological and chemical information recorded in the skin. As physical objects they are an extraordinarily molecular archive through which centuries of craft, trade and animal husbandry can be explored.”

Surviving texts hint at the use of sheepskin as an anti-fraud device. The 12th century text Dialogus de Scaccario—written by Richard FitzNeal, Lord Treasurer during the reigns of Henry II and Richard I—instructs the use of sheepskin for royal accounts as “they do not easily yield to erasure without the blemish being apparent”.

In the 17th century when paper was common, Chief Justice Sir Edward Coke wrote of the necessity that legal documents were written on parchment “for the writing upon these is least liable to alterations or corruption”.

Professor Jonathan Finch from the Department of Archaeology at the University of York said: ” What our research reveals is that there was a sophisticated understanding of the properties of different products and that these could be exploited. In the case of sheepskin parchment, its properties were used to prevent fraud by the surreptitious alteration of important legal documents.

GitHub is investigating a crypto-mining campaign exploiting its server infrastructure

“The structure of the skin clearly showed up any attempt to erase or alter the original text. The success of this study opens up new potential in the study of animal products over the historical period.”

The research is published in the journal Heritage Science, and is entitled: “Scratching the Surface: the use of sheepskin parchment to deter textual erasure in early modern legal deeds”.