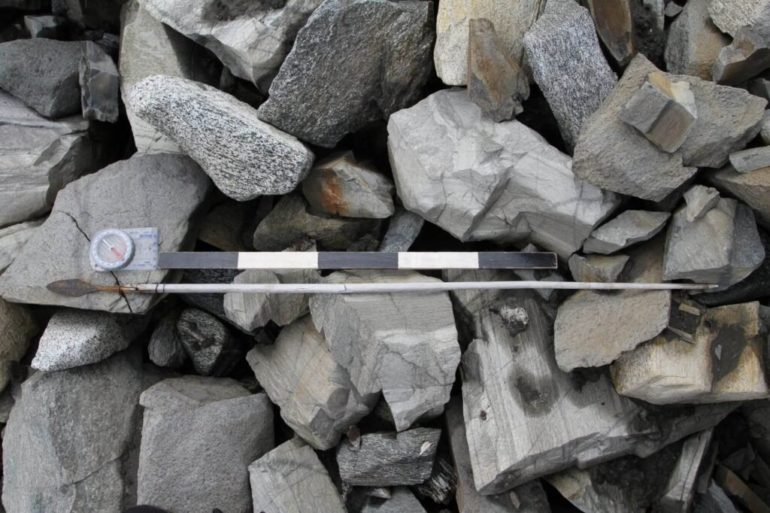 A team of researchers affiliated with a host of institutions in Norway and one in the U.K., has unveiled their findings after collecting and studying a very large number of ancient arrows they found near a melting ice patch in Norway’s Jotunheimen Mountains. In their paper published in the journal The Holocene, the group describes how they kept their research secret to avoid the possibility of others contaminating the site and what they have learned about the arrows thus far.

Back in 2006, archeologist Reidar Marstein found an ancient shoe lying near a melting ice patch (which subsequent recent has shown to have formed approximately around 5600BC) in the Jotunheimen Mountains. The shoe was initially believed to have been from the Viking era, but subsequent study showed it to be approximately 3,300 years old. That led the researchers to further investigate the site. They discovered that the area was littered with arrows used by hunters thousands of years ago. That set off a research project that involved detailing the location of each arrow found and then the study of it that followed. To date, the team has found 68 arrows at the site, dating from the Stone Age up to the Middle Ages—the oldest has been dated to 6,000 years ago, which they note is approximately 800 years before Ötzi.

The researchers note that the ice patch is very nearly a glacier and thus is quite large—but not nearly as large as it once was. Global warming has been melting the patch and as that has occurred material once frozen inside the patch has been exposed. The researchers have found most of the arrows on the ground next to the ice patch, which has led to degradation due to exposure to the elements. But they have also found several arrows laying on top of the ice, an indication that they have only recently been exposed. They note that while some of the arrows found on top of the ice were in good condition, many were not, suggesting they had been degraded due to ice movement inside the patch—and perhaps exposure due to prior melting of the patch.

The researchers have also found reindeer antlers and bones and other biological matter but have been surprised by how few of them have been revealed as the ice melts.