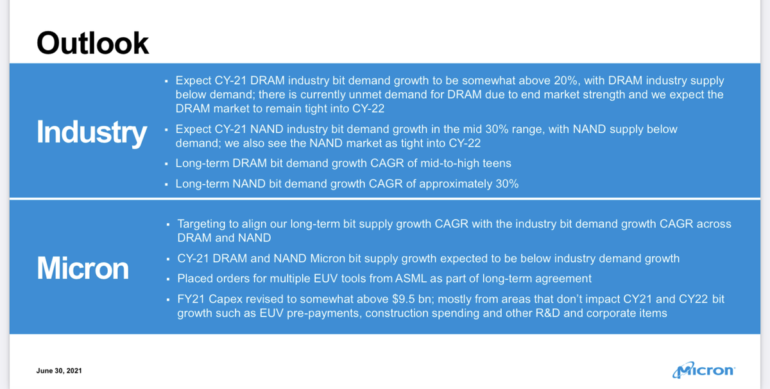 Memory-chip maker Micron Technology this afternoon reported fiscal Q3 revenue and profit in line with a pre-announcement offered on May 25th, and offered an outlook that was several hundred million dollars ahead of expectations.

The company said separately that it will sell a manufacturing plant in Lehi, Utah where it had previously made 3-D Xpoint chips in partnership with Intel. The buyer is Texas Instruments, Micron announced.

The report comes amidst a fraught chip inventory situation, with tight supply, but also worries on Wall Street that chip customers might be over-ordering, possibly prompting a correction in the chip market at some point.

The report sent COMPANY shares down 1% in late trading.

Added Mehrotra, “Our industry-leading 1α DRAM and 176-layer NAND now represent a meaningful portion of our production, and Micron is in the best position ever to capitalize on the long-term demand trends across the data center, intelligent edge and user devices.”

Micron Technology, Inc. announced today that it has entered into a definitive agreement to sell its Lehi, Utah, fab to Texas Instruments. The economic value for Micron from the sale is $1.5 billion, comprised of $900 million in cash from TI from the sales transaction, and approximately $600 million in value from select tools and other assets. Micron has sold some of these assets and will retain the remainder to redeploy to its other manufacturing sites or sell to other buyers.

In this afternoon’s presentation, Micron updated that view, stating that “industry bit demand growth” is expected “to be somewhat above 20%,” and that there “is currently unmet demand for DRAM due to end market strength and we expect the DRAM market to remain tight into CY-22. For NAND, the company sees the same growth rate, but “supply below demand.”