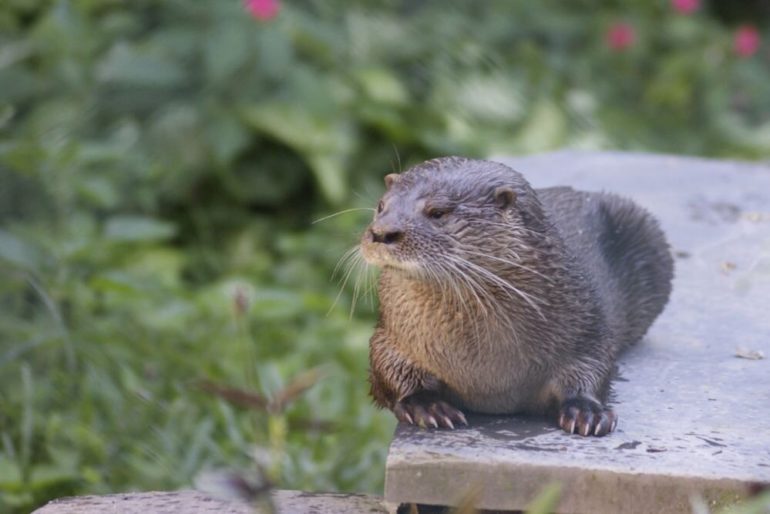 Solitary river otters in Brazil use a rich repertoire of vocalizations during play and conflict, according to a study publishing May 26 in the open-access journal PLOS ONE, by Sabrina Bettoni, Tecumseh Fitch, and colleagues at the University of Vienna.

The otter subfamily includes 13 species of carnivorous, aquatic mammal with social lives ranging from completely solitary to highly gregarious. The most social species of this group, the giant otter, has a complex repertoire of vocalizations that have been extensively studied, but social calls in other otter species are less well understood.

The researchers recorded vocalizations and observed the behavior of six captive neotropical river otters (Lontra longicaudis) at Projeto Lontra, Santa Catarina Island, Brazil. Analyses of nearly 1000 calls revealed six clearly distinguishable call types, at frequencies ranging from 90 to 2500 Hz, which the otters used in different social contexts. For example, harmonic sounds such as high-frequency ‘chirps’ and low-frequency ‘chuckles’ were used, mostly by males, to reaffirm social bonds or to beg for food.

Females often produced low-amplitude “squeaks” during social grooming or play, exhaling “hahs” to express alarm at a novel object, and high-frequency screams to complain—both during play and in more aggressive contexts. Both sexes frequently used tonal, low-pitch ‘growls’ as a warning in disputes over food or individual space.

This is the first time that the vocal repertoire of the neotropical river otter—a solitary species found across Central and South America—has been formally described. With six call types, their vocal complexity is intermediate between the solitary North American river otter (Lontra canadensis: four call types) and the highly social giant otter (Pteronura brasiliensis: 22 call types). The authors say a better understanding of the vocalizations of neotropical river otters could enable conservationists to make use of acoustic recordings to monitor this elusive endangered species.

The authors add: “The neotropical river otter has a rich vocal repertoire, with at least six distinct call types, similar in complexity to other solitary otter species but less complex than that of the social giant otter. Despite differences in sociality, phylogeny and ecology, L. longicaudis seems to possess vocalizations homologous to those found in other otters (e.g. hah and chirp), suggesting phylogenetic inertia in the otter communicative repertoire.”


Citation:
Neotropical river otters in Brazil communicate in a rich vocal range (2021, May 26)
retrieved 26 May 2021
from https://phys.org/news/2021-05-neotropical-river-otters-brazil-rich.html