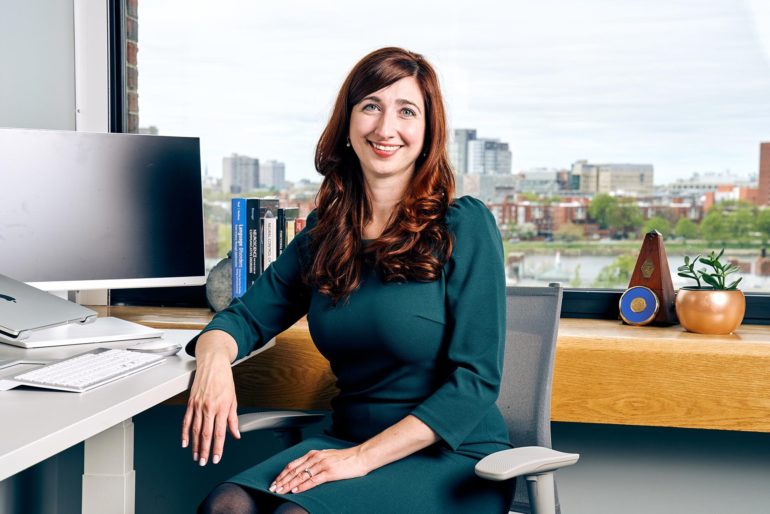 From inside the womb and as soon as they enter the world, babies absorb information from their environment and the adults around them, quickly learning after birth how to start communicating through cries, sounds, giggles, and other kinds of baby talk. But how much of a baby’s language skills are they innately born with, and how much of their communication development is influenced by their environment and upbringing?

Following dozens of children over the course of five years, a Boston University researcher has taken the closest look yet at the link between how babies’ brains are structured in infancy and their ability to learn a language at a young age, and to what degree their environment plays a role in brain and language development.

The new research, described in a paper published in Developmental Cognitive Neuroscience, finds that the brain’s organizational pathways might set a foundation for a child’s language learning abilities within the first year of life. These pathways are known as white matter, and they act as the connectors between the billions of neurons—called gray matter—that comprise the brain tissue. This allows for the exchange of signals and for all of the different tasks and functions we need to perform, as well as all of the biological processes that sustain us.

“A helpful metaphor often used is: white matter pathways are the ‘highways,’ and gray matter areas are the ‘destinations’,” says BU neuroscientist and licensed speech pathologist Jennifer Zuk, who led the study. Zuk, a College of Health & Rehabilitation Sciences: Sargent College assistant professor of speech, language, and hearing sciences, says the more someone does a certain task, like learning a new language, the stronger and more refined the pathways become in the areas of the brain responsible for that task, allowing information to flow more efficiently through the white matter highways. Recent evidence suggests that white matter most rapidly develops within the first two years of life, according to Zuk.

In addition to white matter development, scientists have long known that the environment also plays an important role in shaping a person’s language abilities, Zuk says. But many uncertainties remain about whether nature or nurture is more dominant in determining the makeup of white matter and how well a baby learns to communicate.

In their study, Zuk says, she and her colleagues sought answers to several specific questions: from very early on, to what extent does predisposed brain structure—and genetics—play a role in development? Does the brain develop in tandem with language, and is the environment ultimately driving the progress of both? Or are language skills largely something that individuals are predisposed towards from the get-go?

To investigate this, Zuk and Boston Children’s Hospital researcher and study senior author Nadine Gaab met with 40 families with babies to take images of the infants’ brains using magnetic resonance imaging (MRI) and gather first-of-its-kind data on white matter development. No small feat, considering the babies needed to be sound asleep to allow for crisp capture of their brain activity and structure using MRI.

“It was such a fun process, and also one that calls for a lot of patience and perseverance,” says Zuk, who had to master the challenge of getting four- to eighteen-month-old babies comfortable enough to snooze through the MRI process—the loud sounds of an MRI could be very disruptive to a sleeping baby. “There are very few researchers in the world using this approach,” she says, “because the MRI itself involves a rather noisy background…and having infants in a naturally deep sleep is very helpful in accomplishing this pretty crazy feat.”

It’s also the first time that scientists have used MRI to look at the relationship between brain structure and language development in full-term, typically developing children from infancy to school age.

One important white matter pathway the researchers looked at using MRI is called the arcuate fasciculus, which connects two regions of the brain responsible for language production and comprehension. Using MRI, the researchers measured the organization of white matter by looking at how easily water diffuses through the tissue, indicating the pathway’s density.

Five years after first rocking babies to sleep and gently tucking them inside an MRI machine, Zuk and her collaborators met up with the children and their families again to assess each child’s emerging language abilities. Their assessments tested each one’s vocabulary knowledge, their ability to identify sounds within individual words, and their ability to blend individual sounds together to understand the word it makes.

According to their findings, children born with higher indications of white matter organization had better language skills five years later, suggesting that communication skills could be strongly linked to predisposed brain structure. But, Zuk says, this is only the first piece of a very complicated puzzle.

“Perhaps the individual differences in white matter we observed in infancy might be shaped by some combination of a child’s genetics and their environment,” she says. “But it is intriguing to think about what specific factors might set children up with more effective white matter organization early on.”

Although their findings indicate a foundation for language is established in infancy, “ongoing experience and exposure [to language] then builds upon this foundation to support a child’s ultimate outcomes,” Zuk says.

She says this means that during the first year of a child’s life, “there’s a real opportunity for more environmental exposure [to language] and to set children up for success in the long term.”

Zuk and her research partners plan to continue investigating the relationship between environmental and genetic components of language learning. Their goal is to help parents and caretakers identify early risk factors in language development in young children and determine strategies for strengthening babies’ communicative skills early on in life.