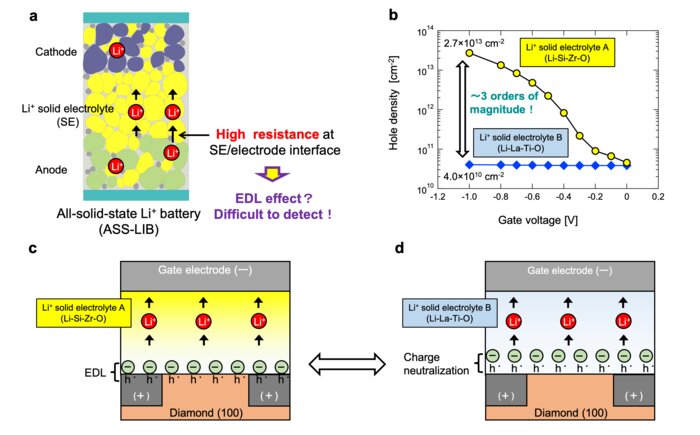 Progress in lithium-ion (Li-ion) batteries have made all sorts of portable devices feasible and fueled the growth of electronics. However, the intrinsic disadvantages of conventional Li-ion batteries, whose cells use a liquid electrolyte solution, render them not entirely suitable for much-anticipated applications like electric vehicles. These limitations include limited durability, low capacity, safety issues, and environmental concerns about their toxicity and carbon footprint. Fortunately, scientists are now focusing on the next-generation solution to all these problems: all-solid-state batteries. The use of a solid electrolyte makes this type of batteries safer and capable of holding a greater power density.

However, a key issue of these batteries is the high resistance found at the electrolyte–electrode interface, which reduces the output of all-solid-state batteries and prevents them from being charged rapidly. One discussed mechanism behind this high interface resistance is the electric double layer (EDL) effect, which involves the gathering of charged ions from an electrolyte at the interface with an electrode. This produces a layer of positive or negative charge, which in turns causes charge of the opposite sign to accumulate throughout the electrode at an equal density, creating a double layer of charges. The problem with detecting and measuring the EDL in all-solid-state batteries is that conventional electrochemical analysis methods don’t make the cut.

The new method revolves around field-effect transistors (FETs) made using hydrogenated diamond and a solid Li-based electrolyte. FETs are a three-terminal transistor in which the current between the source and drain electrodes can be controlled by applying a voltage at the gate electrode. This voltage, thanks to the electric field generated in the semiconductor region of the FET, controls the density of electrons or holes (‘electron vacancies’ with a positive charge). By exploiting these characteristics and using chemically inert diamond channels, the scientists ruled out chemical reduction–oxidation effects affecting the conductivity of the channel, leaving only the electrostatic charges accumulated thanks to the EDL effect as the necessary cause.

Accordingly, the scientists performed Hall effect measurements, which are sensitive to charged carriers only on the surface of materials, on the diamond electrodes. They used different types of Li-based electrolytes and investigated how their composition affected the EDL. Through their analyses, they revealed an important aspect of the EDL effect: it is dominated by the electrolyte’s composition in the immediate vicinity of the interface (about five nanometers in thickness). The EDL effect can be suppressed by several orders of magnitude if the electrolyte material allows for reduction–oxidation reactions that give way to charge compensation. “Our novel technique proved useful for revealing aspects of EDL behavior at the vicinity of solid electrolyte interfaces and helped clarify the effects of interface characteristics on the performance of all-solid-state Li-ion batteries and other ionic devices,” highlights Dr. Higuchi.

The team now plans to use their method to analyze the EDL effect in other electrolyte materials, hoping to find clues on how to reduce the interfacial resistance in next-generation batteries. “We hope that our approach will lead to the development of all-solid-state batteries with very high performance in the future,” concludes Dr. Higuchi. Moreover, understanding the EDL better will also aid in the development of capacitors, sensors, and memory and communication devices. Let us hope exploring this complex phenomenon becomes easier for other scientists so that the field of solid-state ionic devices keeps advancing.

Sizing the AI software market: Not as big as investors expect but still $37 billion by 2025