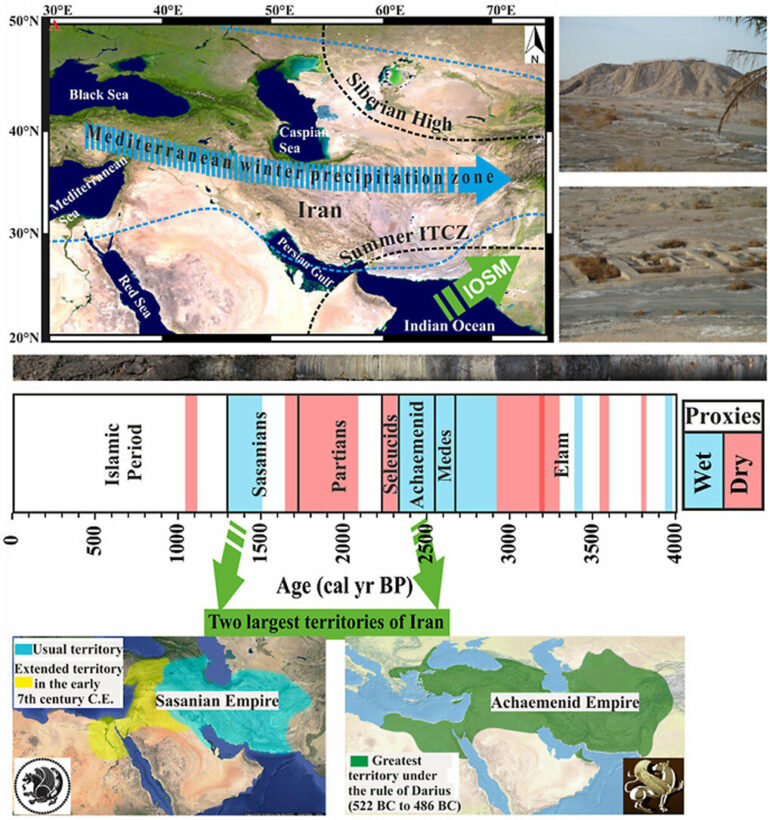 Pronounced climate fluctuations and changed conditions for agriculture coincided with the rise and fall of the Persian Empires, according to an international study led by researchers at Linköping University. The researchers have studied historical variations in precipitation and vegetation in southeastern Iran over the last 4,000 years. The study highlights the vulnerability of human societies to fluctuating climate.

Today, most of Iran is a desert. But further back in history, the entire area experienced a lot of rainfall before the monsoon patterns changed. From the Late Bronze Age to Late Antiquity, Iran was at the center of significant political and economic developments in the region.

“Some 4,200 years ago, there was an Early Bronze Age community in Konar Sandal near Jiroft. Agriculture thrived, and an urban complex has been partly excavated at the site. However, something triggered the collapse of this highly developed Bronze Age community, and we were interested in what this could have been,” says Joyanto Routh, Professor at the Department for Thematic Studies at Linköping University, who led the study published in the Quaternary Science Reviews.

A team of international researchers has taken a closer look at possible variations in vegetation and precipitation over the past 4,000 years in southeastern Iran, close to the archeological site in Konar Sandal. They examined sediments in a 2.5-meter-long peat core containing layer upon layer of material deposited over thousands of years.

The peat layers were dated using the Carbon-14 method. The researchers also conducted analyses of trace elements, pollen, and biomarkers and combined this with the existing archeological data to find out what plants and animals inhabited the area during different periods. In the absence of historical records, tracing these signals could provide clues to whether people lived there, whether they cultivated anything, and, if so, what.

With this information, the researchers could reconstruct whether the climate was hot or cold, wet or dry. During wet periods, people engaged more in agriculture, which fed the population, and the community thrived. People switched to a nomadic lifestyle in dry periods and abandoned the settlement but returned when favorable conditions resumed.

The researchers found that the area had experienced intermittent wet and dry periods. The first pollen record from Cerealia-type plants indicates that intensive agricultural practices began some 3,900 to 3,700 years ago. This period coincides with a relatively moist climate in the Jiroft Valley.

In contrast, 3,300 to 2,900 years ago, the weather in the valley was very dry and windy. Cerealia-type pollen levels were very low, indicating that agriculture had almost ceased. The driest conditions in the Jiroft Valley, some 3,200 years ago, coincided with the collapse of the Late Bronze Age settlement in Konar Sandal. Around 600 years later, the Persian Empires emerged, with two of the most powerful kingdoms in Eurasian history: the Achaemenid and Sasanian Empires, which are almost synchronous with the two wettest periods in the sediment record.

“We can establish from our peat core that when the Achaemenid and Sasanian Empires were at their peak, agriculture was thriving and provisions were high,” says Joyanto Routh.

According to Joyanto Routh, climate has always played an essential role in the Middle East, something that is not always taken into the equation.

“Archaeologists suggest that these empires fell due to weak succession, pestilence, and political and military expansion. They generally overlook climate as a driving factor behind these changes. We don’t deny that the arguments stated by archeologists are important. However, you have to consider that suddenly, an agricultural community could no longer grow cereals because the monsoon pattern had shifted—there was an acute scarcity of water. This had cascading effects that led to the decentralization of power and eventually the demise or abandonment of many settlements in the region,” says Joyanto Routh.

Although cautious about linking the success of these empires to fluctuations in climate, the researchers argue that these correlations highlight the importance of combining detailed evidence of climate change with archaeological and historical contexts to be able to explore the interplay between various factors that may have impacted earlier civilizations.


Citation:
Climate change may have impacted the rise and fall of Middle Eastern civilizations (2023, January 18)