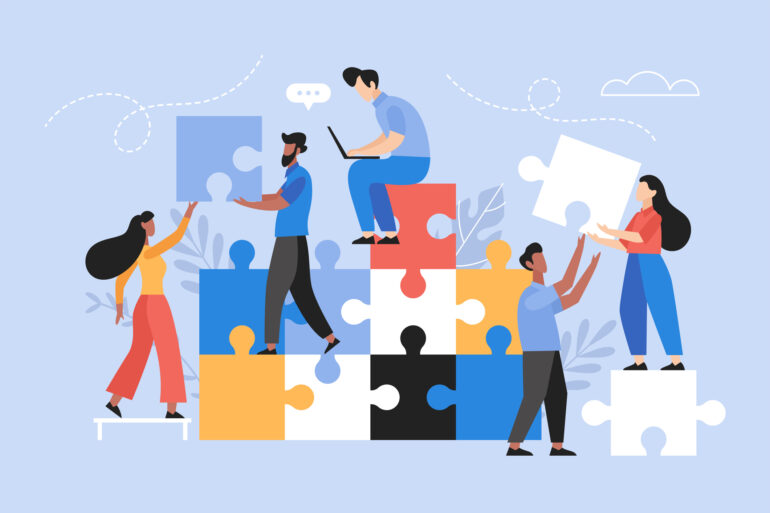 A person who is generous and caring at home may be cutthroat at work, striving to bring in the most sales or advance up a corporate management chain. In a similar vein, a self-centered neighbor may be a model of altruism on Twitter.

It’s a widespread feature of human society: People can adopt different behaviors depending on the social context they’re in. Yet according to a new study by Penn biologists out today in Science Advances, that context-dependent behavior tends to promote the spread of cooperative behavior across a whole society.

Using models rooted in game theory, the researchers show that cooperation is particularly favored when there is room for “spillover” between domains. In other words, a worker can observe how their colleague behaves with her friends when deciding how to interact with that person and others in the workplace.

“We studied groups both small and large,” says Joshua Plotkin, a professor in Penn’s Department of Biology and senior author on the new paper, “and we find that the simple idea of conditioning behavior on the social context, while allowing imitation of behaviors across different contexts—that alone facilitates cooperation in all domains simultaneously.”

That work, along with a related study in Nature Human Behaviour, suggests that the greater the number of domains of social life, the higher the likelihood that cooperative interactions will eventually dominate.

“This shows that the structure of interactions in different aspects of our social lives can galvanize each other—for the benefit of mutual cooperation,” Plotkin says.

Ever since Charles Darwin, scientists have puzzled over the enigma of cooperation. It’s clear that cooperation is essential to human society, but evolutionarily, it’s difficult to explain why people would give something up in order to help others. Plotkin and colleagues have modeled and explored this issue from many angles, considering how the structure of social interaction networks, the presence of memory and reputations, and the capacity for empathy, among other features, influences the likelihood that cooperation will come to flourish in a group.

In these new papers, led by first author Qi Su, a Simons Postdoctoral Fellow at Penn, the researchers introduced another nuance into their analysis of strategic interactions: A multi-layered society, in which actors interact in separate social domains. In their model, actors can choose different strategies to enact in the different domains—perhaps being selfish in one and cooperative in another.

In Nature Human Behaviour, Plotkin and his team’s analysis showed that when these interactions play out in a model where actors in a given context can imitate other players’ strategies only in that context, cooperation may thrive in one domain, but selfish strategies win out in another. Overall, though, the likelihood of cooperation dominating in any one domain goes up as the number of social domains increases.

Domains tended to act synergistically when Plotkin and colleagues added an additional feature, explored in the Science Advances paper. In the model presented there, actors could observe what strategies others were using in the other layers, allowing them to copy strategies from one sphere of interaction to use in a different sphere.

“Here the results are more striking,” Plotkin says, “because multiple domains with spillover tends to facilitate cooperation in all domains simultaneously, even if cooperation would never spread in any one domain alone.”

For example, in a population of six individuals interacting in a single domain, roughly half of all possible interaction networks favor the evolution of spiteful behavior—individuals who pay a cost to harm others. When taking the same networks of six individuals and separating the pairwise interactions into four different social contexts, on the other hand, cooperation is then favored to evolve for all network structures.

“A similar thing occurs in much larger groups,” Plotkin says. “When you have multiple domains, cooperation will tend to predominate, even if the benefit-to-cost ratio is small.”

Su adds, “Context-dependent behavior may help use to understand why human societies are often highly cooperative, even though they are densely connected.”

In addition to their modeling, the researchers looked at empirical evidence from real-world interaction networks, which supported the notion that multi-layered social domains will lead to greater cooperation by “coupling”—when the strategy an individual employs in one domain influences the strategy used in another.

Most models of cooperation assume bi-directional interactions—one person chooses where or not to act altruistically to another, and also conversely. In a third related paper published last month in the Proceedings of the National Academy of Sciences, Plotkin and colleagues considered unidirectional interactions that are common in human society: Pure altruism, when one individual helps another without the opportunity for receiving anything directly in return.

The Marquesas Islands: Window into a lost world

When including unidirectional interactions in their model, removing the opportunity for direct reciprocity between pairs, the researchers found that cooperation was still favored across most scenarios, “a truly shocking” result, says Plotkin. What drives this, he notes, is a kind of “third-party reciprocity,” where trios of actors form, each giving in one direction, but all benefiting. In this way, the prevailing tendency is for actors to cooperate.

The researchers note that many real-world interactions are unidirectional: In the pandemic, volunteer first responders put themselves at risk to help others; supervisors have opportunity to support subordinates that can’t be reciprocated; one can follow another person on Twitter without that person following them in return. In future work, the Penn researchers hope to explore how to possibly intervene in a directed network to promote cooperation.

“Careful moderation of directed interactions may help to facilitate more prosocial behavior,” Plotkin says. “I’m thinking about the algorithms by which Twitter suggests new people to follow, for example. Those networks could be assembled in ways that help foster cooperation.”