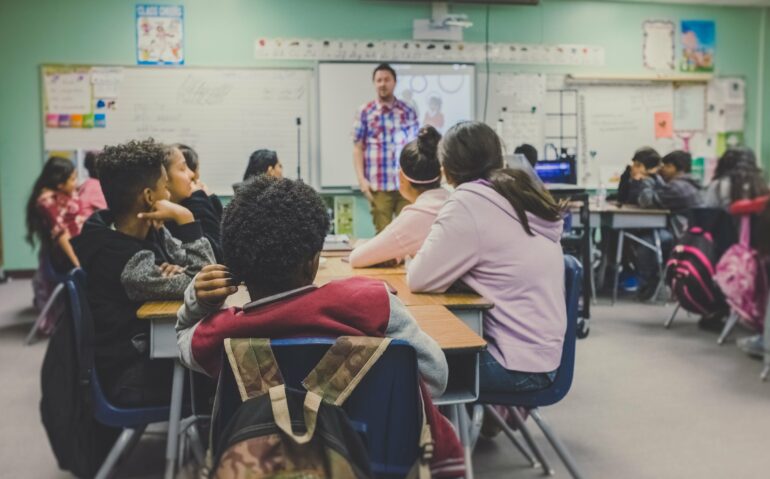 Interventions that seek to evoke empathy in teachers can sideline biases and narrow the racial gap in suspensions of middle school students, suggests new research from the University of California, Berkeley.

In one of the most rigorous efforts to date to combat race-based inequity in school suspensions, UC Berkeley social psychologist Jason Okonofua and fellow researchers recruited 66 middle school teachers who teach math to more than 5,500 7th- and 8th-grade students in one of the nation’s largest school districts.

After the teachers completed two online empathy-evoking sessions over the course of a school year, their students—especially those belonging to racial minorities—were less likely to get suspended, and the racial gap in suspensions was reduced by 45%, according to findings to be published in the journal Science Advances.

Moreover, the positive effects of the intervention persisted through the following school year when students had new teachers who were not involved in the empathy intervention. That second school year also saw fewer suspensions of students of color, as well as other vulnerable groups such as students who qualified for special education services.

“By virtue of having one class with a teacher who participated in the intervention, a student, especially a Black or Hispanic student, was less likely to get in trouble during any other teacher’s class that entire school year and also the next school year,” said Okonofua, an assistant professor of psychology at UC Berkeley and the study’s lead author.

The large-scale empathy intervention sought to narrow the suspension gap between Black and Latinx/Hispanic middle school students and their white peers. Nationally, Black male middle and high school students are four times as likely to be suspended as white students.

The school district that partnered in the study is a diverse one and spans more than a dozen cities in the southeastern United States. It cannot be identified due to confidentiality protocols.

Okonofua credits a non-judgmental approach for circumventing racial and other biases in school disciplinary outcomes.

“Our intervention materials don’t focus on bias, or racial disparities in outcomes. That approach can put teachers on the defensive and backfire,” he said. “Instead, we reminded teachers of why they entered the profession in the first place, which for almost everyone means helping children learn and grow, even when they struggle sometimes or act out.”

The success of Okonofua’s approach could play a key role in advancing former President Barack Obama’s stalled federal Every Student Succeeds Act, which sought to curb disciplinary measures that pull students out of classrooms and to find innovative alternatives to suspensions and expulsions.

“At a time when anti-bias training is not producing the improvements in outcomes we need to see, our empathy intervention was able to sideline teachers’ biases to reduce a racial disparity in suspensions in schools and do it in a sustainable way,” said Okonofua, who studies the impact of stereotyping on school discipline and the relationship between education and justice systems.

Researchers focused on middle school because adolescence is a time in which young people are learning to navigate relationships with multiple teachers, and peer relationships are in flux.

“Around this age, children become increasingly aware of racial stereotypes and sensitive to disrespectful treatment,” Okonofua said. “Meanwhile, teachers can feel overwhelmed by the daily need to keep classroom learning and behavior on track. Conflicts and disciplinary problems can spike and predict whether children will drop out of school.”

How they conducted the study

Over the 2017-18 school year, during two online sessions that each lasted less than an hour, participating teachers read poignant testimonials from students from diverse backgrounds.

They also read testimonials from teachers who described how they made efforts to listen to and understand students when they misbehave, and sustain positive and trusting relationships with their students.

In addition to writing about their approaches to discipline, the teachers described their reasons for entering the profession, and what advice they would share with new teachers.

“At the beginning of the year, I let (students) know that every day is a new day. … I won’t give up on them. In my eyes, it is imperative to say what you mean in the most ‘real’ way, and students will believe you. Be honest and consistent,” one teacher wrote.

How DNA is preserved in archaeological sediments for thousands of years

Another teacher’s approach was to “incorporate a slight sense of humor in my lessons … and make a story out of solving math problems. The students typically laugh and understand the material better when I include real-world examples.”

For Okonofua, this open-minded approach to sidelining biases is promising for multiple professions where power differentials lead to conflict.

“We’re looking at applying this type of approach in prisons, for police officers on the beat, and also in health care and the relationships between health care providers and their patients,” he said.

“Ultimately, we hope to help everyone double down on their professional goals, and not let stereotypes shape our decision-making or how we treat others,” he added.

In addition to Okonofua, researchers of the study are J. Parker Goyer and Gregory Walton at Stanford University, Constance Lindsay at the University of North Carolina at Chapel Hill.