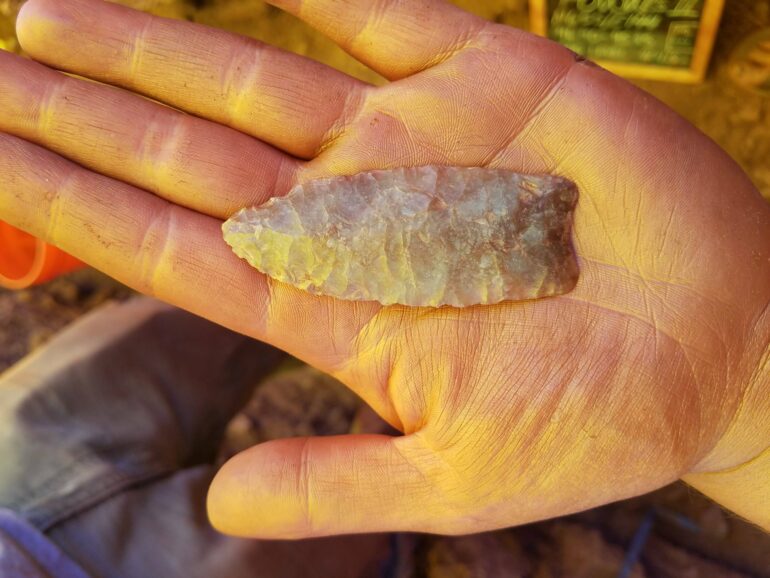 Archaeological excavations led by Wyoming’s state archaeologist and involving University of Wyoming researchers have confirmed that an ancient mine in eastern Wyoming was used by humans to produce red ocher starting nearly 13,000 years ago.

That makes the Powars II site at Sunrise in Platte County the oldest documented red ocher mine—and likely the oldest known mine of any sort—in all of North and South America. The excavations, completed shortly before the 2020 death of famed UW archaeologist George Frison, confirmed theories he advanced stemming from research he began at the site in 1986.

The findings appear in the Proceedings of the National Academy of Sciences (PNAS).

The paper’s lead author is Wyoming State Archaeologist Spencer Pelton, who became involved in the Powars II project in 2016 when he was a UW doctoral student.

“We have unequivocal evidence for use of this site by early Paleoindians as long as 12,840 years ago and continuing by early Americans for about 1,000 years,” Pelton says. “It’s gratifying that we were finally able to confirm the significance of the Powars II site after decades of work by so many, including Dr. Frison, who learned of the site in the early 1980s and was involved in the research until his death.”

In fact, Frison—who died in September 2020 as the only UW faculty member ever elected to the prestigious National Academy of Sciences—is listed as a co-author of the new paper. Other contributors were George Zeimens, executive director of the Sunrise Historic and Prehistoric Preservation Society; Erin Kelley, a UW graduate and Office of the Wyoming State Archaeologist staff member; and UW Ph.D. students Sarah Allaun, Alexander Craib, Chase Mahan and Charles Koenig.

Red ocher, also known as hematite, fulfilled a wide range of functions in Paleoindian societies, including as a pigment in rituals. It has been found at ancient graves, caches, campsites and kill sites in the Great Plains, the Rocky Mountains and beyond. The Powars II site is the only red ocher quarry identified in the North American archaeological record north of southern Mexico—and one of only five such quarries identified in all of the Americas.

Among the artifacts previously discovered at the Powars II site are Clovis points—believed to be from the first inhabitants of North America—along with other projectile points, tools and shell beads.

The projectile points come from numerous locations in the region, including from as far away as the Edwards Plateau in Texas, according to the paper. That makes it likely that red ocher found at archaeological sites throughout the American midcontinent came from the Powars II quarry.

“Beyond its status as a quarry, the Powars II artifact assemblage is itself one of the densest and most diverse of any thus far discovered in the early Paleoindian record of the Americas,” Pelton says. “The site contains over 30 chipped stone tools per square meter, some of the oldest canid remains from an American archaeological site and rare or unique artifacts, among other distinctions.”

The researchers say the evidence discovered so far indicates the quarry was used in two primary periods. During the first, dating to as long as 12,840 years ago and lasting several hundred years, people not only quarried red ocher—using bones and antlers as tools—but also produced and repaired weapons, along with other activities. After a hiatus of a century or more, the site was occupied by humans who mined red ocher and deposited artifacts in piles in a quarry pit.

Famous rock art cave in Spain was used by ancient humans for more than 50,000 years

“Further excavation of the estimated 800-square-meter remainder of the site will certainly reveal complexity not captured by our sample,” the researchers wrote.

Pelton nominated the Powars II site to the National Register of Historic Places in 2021.