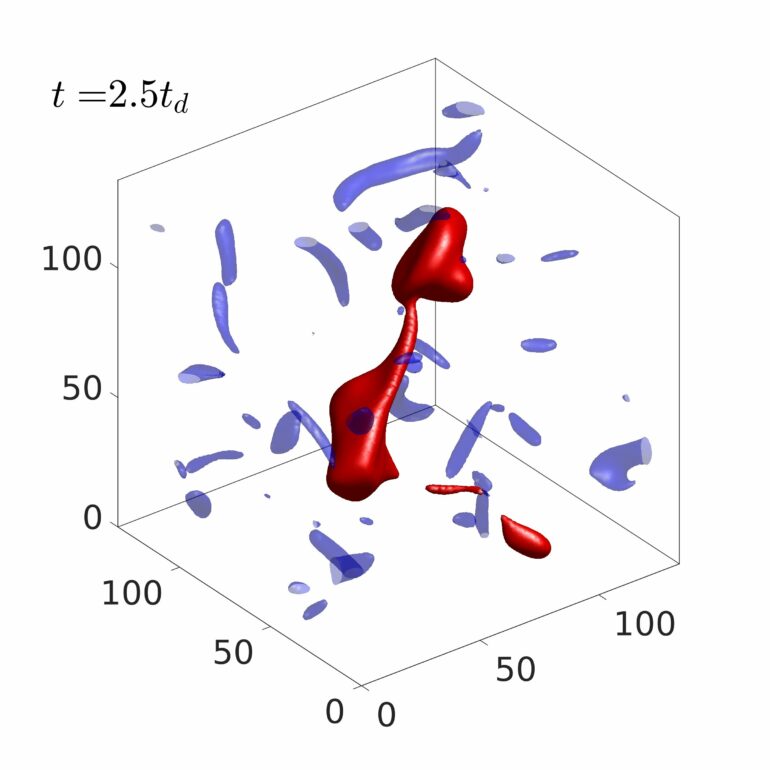 New computer simulations can go where experiments reach their limits. Scientists from the Center of Applied Space Technology and Microgravity (ZARM) at the University of Bremen have developed a computer code that enables accurate predictions of the disintegration of droplets in turbulent flows.

Surprisingly it shows that there is no point in time when a liquid drop cannot break up into even smaller drops. The results are published in the journal Science Advances and the open source computer code is now available to other scientists.

The disintegration of drops and bubbles by chaotic swirls in turbulence is common in everyday life: When taking a shower or using a spray bottle to disperse a liquid in the air or in the oceans when gas bubbles are produced as water waves break. Drop breakup also plays a key role in the manufacturing of cosmetics, medicines and foods, in particular when it comes to mixing liquids which do not naturally want to mix, such as oil and egg yolk in mayonnaise. But, how long do we have to stir to prepare a tasty mayonnaise?

To answer this question, a deeper understanding of the phenomenon of breakup itself is necessary: At what point does a drop or bubble actually break up into smaller pieces? Does the breakup eventually reach a final state in which the drops are so small that they do not split any further?

To date, these questions have been studied mostly in experiments, but tracking drops in a turbulent environment is extremely difficult. Additionally, a large amount of measurement data is needed to make statistically reliable statements about the fragmentation process. To complicate matters further, there are many parameters that must be taken into account for the experiments, like the selected type of liquid and its properties (i.e., density and surface tension) or the droplet size and the degree of turbulence of the flow.

As a consequence, the data available on the breakup of drops and bubbles in turbulent flows are scarce and this limits a deeper understanding of the phenomenon and hinders predictions.

A new computer code, developed by Dr. Alberto Vela-Martín from ZARM at the University of Bremen, is now capable of simulating thousands of experiment scenarios for the breakup of drops. The key findings of the new simulations are that the drop fragmentation process does not reach a final state, but—in contrast to what was previously thought—only slows down and continues over long time scales. Therefore, the hitherto postulated minimum stable drop size (depending on the respective characteristics of the liquid and the degree of turbulence of the flow), where a drop would not split any further, does not seem to exist.

Furthermore, the simulations showed that the probability that the turbulence will rupture the drop or the bubble is the same at any point in time. An individual droplet therefore does not “know” how long it has been exposed to the turbulent flow, it is “memoryless,” so to speak. Coming back to the example of mayonnaise, what do the new results mean? The longer you stir the mayonnaise, the creamier it becomes—you just need a lot of patience.

From black holes to sands: Application of holographic duality to granular matter

Provided by
University of Bremen