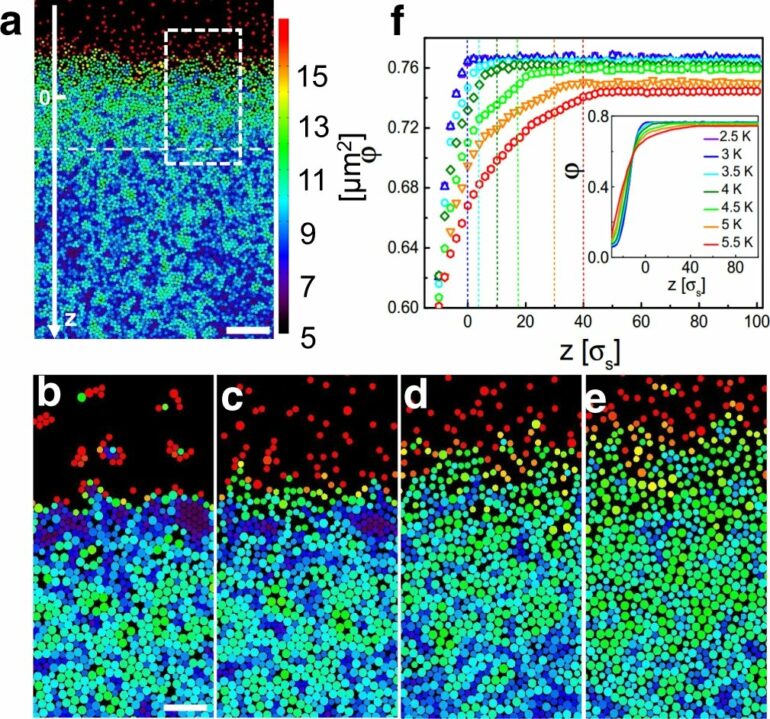 In 1842, the famous British researcher Michael Faraday made an amazing observation by chance: A thin layer of water forms on the surface of ice, even though it is well below zero degrees. The temperature is below the melting point of ice, yet the surface of the ice has melted. This liquid layer on ice crystals is also why snowballs stick together.

It was not until about 140 years later, in 1985, that this “surface melting” could be scientifically confirmed under controlled laboratory conditions. By now, surface melting has been demonstrated in a variety of crystalline materials and is scientifically well understood: Several degrees below the actual melting point, a liquid layer only a few nanometers thick forms on the surface of the otherwise solid material.

Because the surface properties of materials play a crucial role in their use as, e.g. catalysts, sensors, battery electrodes and more, surface melting is not only of fundamental importance but also in view of technical applications.

It must be emphasized that this process has absolutely nothing to do with the effect of, say, taking an ice cube out of the freezer and exposing it to ambient temperature. The reason why an ice cube melts on its surface first under such conditions is that the surface is significantly warmer than the ice cube’s interior.

In crystals with periodically arranged atoms, the thin liquid layer on the surface is typically detected by scattering experiments, which are very sensitive to the presence of atomic order. Since liquids are not arranged in a regular pattern, such techniques can therefore clearly resolve the appearance of a thin liquid film on top of the solid.

This approach, however, does not work for glasses (i.e. disordered, amorphous materials) because there is no difference in the atomic order between the solid and the liquid. Therefore, surface melting of glasses has remained rather unexplored with experiments.

To overcome the above-mentioned difficulties, Clemens Bechinger, physics professor at the University of Konstanz, and his colleague Li Tian used a trick: instead of studying an atomic glass, they produced a disordered material made of microscopic glass spheres known as colloids. In contrast to atoms, these particles are about 10,000 times larger and can be observed directly under a microscope.

The researchers were able to demonstrate the process of surface melting in such a colloidal glass because the particles near the surface move much faster compared to the solid below. At first glance, such behavior is not entirely unexpected, since the particle density at the surface is lower than in the underlying bulk material. Therefore, particles close to the surface have more space to move past each other, which makes them faster.

What surprised Clemens Bechinger and Li Tian, however, was the fact that even far below the surface, where the particle density has reached the bulk value, the particle mobility is still significantly higher compared to the bulk material.

The microscope images show that this previously unknown layer is up to 30 particle diameters thick and continues from the surface into the deeper regions of the solid in a streak-like pattern. “This layer which reaches far into the material has interesting material properties since it combines liquid and solid features,” Bechinger explains.

As a consequence, the properties of thin, disordered films depend very much on their thickness. In fact, this property is already being exploited in their use as thin ionic conductors in batteries, which are found to have a significantly higher ionic conductivity compared to thick films. With the new insights gained from the experiments, however, this behavior can now be understood quantitatively and thus be optimized for technical applications.