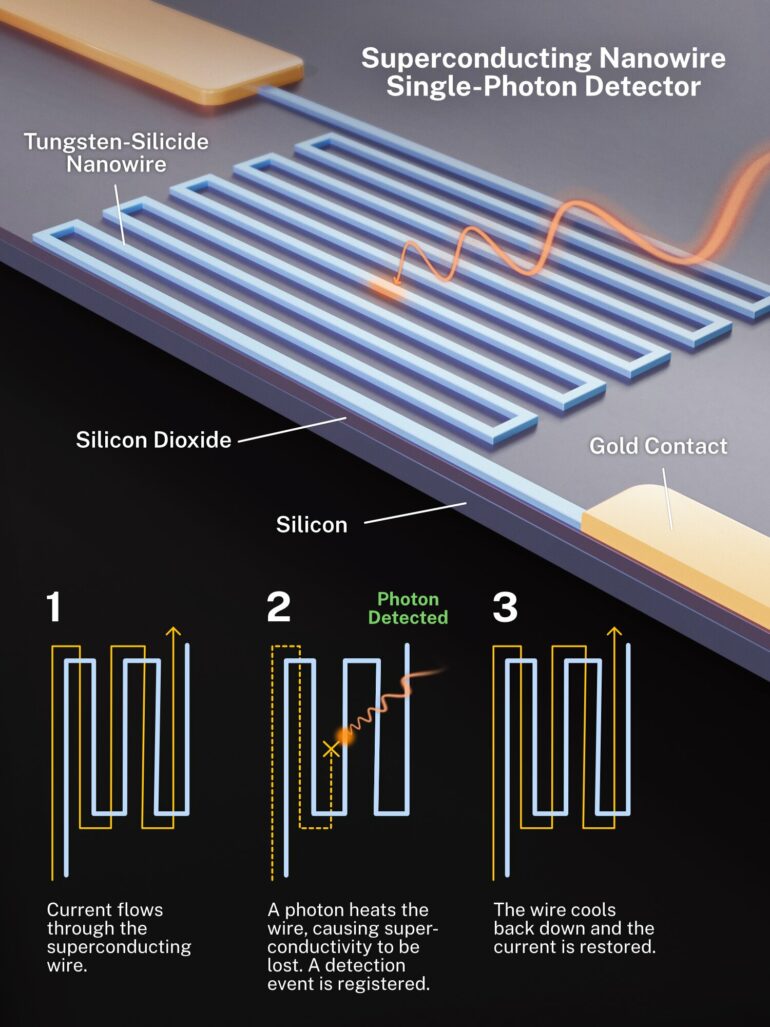 For decades, astronomers and physicists have been trying to solve one of the deepest mysteries about the cosmos: An estimated 85% of its mass is missing. Numerous astronomical observations indicate that the visible mass in the universe is not nearly enough to hold galaxies together and account for how matter clumps. Some kind of invisible, unknown type of subatomic particle, dubbed dark matter, must provide the extra gravitational glue.

In underground laboratories and at particle accelerators, scientists have been searching for this dark matter with no success for more than 30 years. Researchers at NIST are now exploring new ways to search for the invisible particles. In one study, a prototype for a much larger experiment, researchers have used state-of-the-art superconducting detectors to hunt for dark matter.

The study has already placed new limits on the possible mass of one type of hypothesized dark matter. Another NIST team has proposed that trapped electrons, commonly used to measure properties of ordinary particles, could also serve as highly sensitive detectors of hypothetical dark matter particles if they carry charge.

In the superconducting detector study, NIST scientists Jeff Chiles and Sae Woo Nam and their collaborators used tungsten silicide superconducting nanowires only one-thousandth the width of a human hair as dark-matter detectors.

“Superconducting” refers to a property that some materials, such as tungsten silicide, have at ultralow temperatures: zero resistance to the flow of electrical current. Systems of such wires, formally known as superconducting nanowire single-photon detectors (SNSPDs), are exquisitely sensitive to extremely small amounts of energy imparted by photons (particles of light) and perhaps dark matter particles when they collide with the detectors.

Researchers operate SNSPDs at a temperature just below the threshold required for the nanowires to become superconducting. That way, even a tiny amount of energy deposited by an incoming particle will produce enough heat to develop electrical resistance in the wire.

With the flow of current through the nanowire now obstructed, the current travels along a second path connected to an electrical amplifier. The current generates a brief but measurable voltage —a signal that part of the nanowire heated up by interacting with a photon or, perhaps, a dark matter particle.

The SNSPD experiment consisted of a small square array of nanowires, each 140 nanometers (nm, or billionths of a meter) in diameter and spaced 200 nm apart, confined within a light-tight box. The researchers added a stack of two types of insulating materials, designed to make it more likely that the system could search for a type of hypothetical dark matter particle known as a dark photon.

According to theoretical predictions, a dark photon colliding with the stack would be likely to annihilate itself and generate an ordinary infrared photon in its stead. A lens would then focus the photon onto the SNSPD circuit, where it could interact with the nanowires and be detected as a voltage signal.

The small, 180-hour-long experiment found no evidence of dark photons in the low-mass range of 0.7 to 0.8 electron volts/c2 (eV/c2), less than half a millionth the mass of the electron, the lightest known stable particle. (Because the masses of subatomic particles are much too small to be conveniently expressed in terms of a fraction of a kilogram, physicists use the definition of mass in Einstein’s E=mc2 instead.)

Although the experiment would have to be performed on a larger scale with many more detectors to provide an expanded dataset, it is still the most sensitive search for dark photons performed to date in this mass range, Nam said. The researchers, including collaborators from the Massachusetts Institute of Technology, Stanford University, University of Washington, New York University and the Flatiron Institute, reported their results in an article in Physical Review Letters.

In a second report, some of the same NIST researchers and their collaborators analyzed data from the first study in a different way. The scientists ignored potential effects of the stack of insulating material and focused only on whether any kind of dark matter particles would be capable of interacting with individual electrons in the nanowire detector itself—either by scattering off an electron or being absorbed by it.

Although small, this study has placed the strongest limits of any experiment to date—excluding astrophysical searches and studies of the sun—on the strength of interactions between electrons and dark matter in the sub-million-eV mass range. That makes it likely that a scaled-up version of the SNSPD setup could make a significant contribution to the search for dark matter, said Chiles.

In a third study, a NIST physicist and his colleagues proposed that single electrons, electromagnetically confined to a small region of space, could be sensitive detectors of charged dark matter particles. For more than three decades, scientists have used a much heavier population of positively charged beryllium ions to probe the electric and magnetic properties of ordinary (non-dark) charged particles.

Electrons, however, would make ideal detectors for sensing dark matter particles if those particles have even the slightest electric charge. That’s because electrons have the lowest mass of any charged particle known and therefore are easily pushed or pulled by the merest electrical disturbance, such as a particle with a small electric charge passing nearby.

Only a few single trapped electrons would be needed to detect charged dark matter particles with only one-hundredth the charge of an electron, said NIST physicist Jake Taylor, a fellow of the Joint Quantum Institute and the Joint Center for Quantum Information and Computer Science, research partnerships between NIST and the University of Maryland.

The electromagnetically trapped electrons would be cooled to a fraction of a degree above absolute zero in order to limit the particle’s inherent jitter. Taylor, along with Daniel Carney of the Lawrence Berkeley National Laboratory in California, Hartmut Haffner of the University of California, Berkeley, and David C. Moore of Yale University, described their proposed experiment in a Physical Review Letters.

By configuring the trap so that the strength of the electron’s confinement is different along each dimension—length, width and height—the trap could potentially also provide information about the direction from which the dark matter particle arrived.

However, scientists must grapple with a technological challenge before they can employ electron trapping to search for dark matter. Photons are used to cool, manipulate and sense the motion of trapped ions and electrons. For beryllium ions, those photons—generated by a laser—fall in the range of visible light.

The technology that enables visible-light photons to manipulate trapped beryllium ions is well established. In contrast, the photons required to sense the motion of single electrons have microwave energies, and the necessary detection technology has yet to be perfected. However, if interest in the project is strong enough, scientists might develop an electron trap capable of detecting dark matter in less than five years, Carney estimated.

In another study, a NIST researcher and an international group of colleagues are looking beyond Earth to hunt for dark matter. A team that includes Marianna Safronova of the University of Delaware and the Joint Quantum Institute has proposed that a new generation of atomic clocks, installed on a spacecraft that would fly closer to the sun than Mercury’s orbit, could search for signs of ultralight dark matter.

When particles move: A deep dive into the relationship between cohesion and erosion

This hypothetical type of dark matter, bound to a halo surrounding the sun, would cause tiny variations in the fundamental constants of nature, including the mass of the electron and the fine structure constant.

Changes in these constants would alter the frequency at which atomic clocks vibrate—the rate at which they “tick.” Among the large variety of atomic clocks, researchers would carefully choose two that have different sensitivities to changes in the fundamental constants driven by ultralight dark matter. By measuring the ratio of the two varying frequencies, scientists could reveal the presence of the dark matter, the researchers calculated.

They describe their analysis in an article posted online in Nature Astronomy.