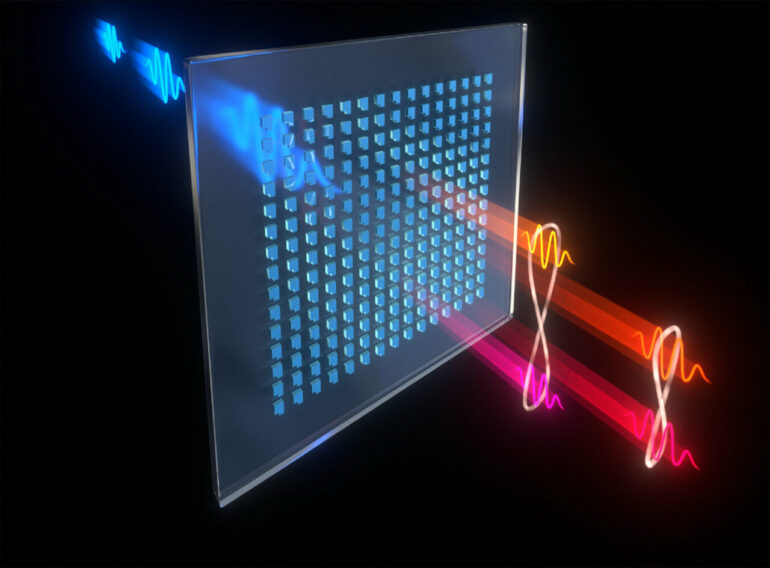 Scientists from the Max Planck Institute for the Science of Light and the Friedrich-Alexander-Universität Erlangen-Nürnberg, in cooperation with Sandia National Laboratories, have successfully created photon pairs at several different frequencies using resonant metasurfaces.

A photon is the quantum (the minimum amount involved in an interaction) of any form of electromagnetic radiation, such as light. Photons are essential to a number of current research fields and technologies, like quantum state engineering, which in turn represents the cornerstone of all quantum photonic technologies. With the help of quantum photonics, scientists and engineers are working to create new technologies such as new forms of encryption for highly secure channels of communication and new types of supercomputers.

One of the key requirements for quantum state engineering is the creation of photon pairs. This has traditionally been achieved through the use of one of the two nonlinear effects, spontaneous parametric down-conversion (SPDC) or spontaneous four-wave mixing (SFWM), in bulk optical elements. The nonlinear effects cause one or two pump photons to spontaneously decay into a photon pair.

However, these effects require strict momentum conservation for the involved photons. Any material, which the photons have to travel through, has dispersion properties, preventing momentum conservation. There are techniques that still achieve the needed conservation, but those severely limit the versatility of the states in which the photon pairs can be produced. As a result, even though traditional optical elements like nonlinear crystals and waveguides have successfully produced many photonic quantum states, their use is limited and unwieldy. So recently, researchers have looked towards so-called optical metasurfaces.

Metasurfaces are ultrathin planar optical devices made up of arrays of nanoresonators. Their subwavelength thickness (a few hundred nanometers) renders them effectively two-dimensional. That makes them much easier to handle than traditional bulky optical devices. Even more importantly, due to the lesser thickness, the momentum conservation of the photons is relaxed because the photons have to travel through far less material than with traditional optical devices: according to the uncertainty principle, confinement in space leads to undefined momentum. This allows for multiple nonlinear and quantum processes to happen with comparable efficiencies and opens the door for the usage of many new materials that would not work in traditional optical elements.

For this reason, and also because of being compact and more practical to handle than bulky optical elements, metasurfaces are coming into focus as sources of photon pairs for quantum experiments. In addition, metasurfaces could simultaneously transform photons in several degrees of freedom, such as polarization, frequency, and path.

Tomás Santiago-Cruz and Maria Chekhova from Max Planck Institute for the Science of Light and Friedrich-Alexander-Universität Erlangen-Nürnberg in cooperation with the research group of Igal Brener at Sandia National Laboratories in Albuquerque, New Mexico, have now taken a new step in achieving just that. In a paper recently published in the Science journal, Chekhova and her colleagues for the first time demonstrated how metasurfaces produce pairs of photons of two different wavelengths.

Moreover, photons of a certain wavelength can be paired with photons at two or more different wavelengths simultaneously. This way, one can create multiple links between photons of different color. In addition, resonances of the metasurface enhance the rate of photon emission by several orders of magnitude compared to uniform sources of the same thickness. Tomás Santiago-Cruz believes that metasurfaces will play a key role in future quantum research: “Metasurfaces are leading to a paradigm shift in quantum optics, combining ultra small sources of quantum light with far reaching possibilities for quantum state engineering.”

In the future, these features can be used to build very large complicated quantum states, which are needed for quantum computation. Moreover, the slim profile of metasurfaces and their multifunctional operation enables the development of more advanced compact devices, combining generation, transformation, and detection of quantum states. Maria Chekhova is excited about the path their research has been taking: “The sources of our photons are becoming tinier and tinier while at the same time their possibilities just keep getting broader and broader.”