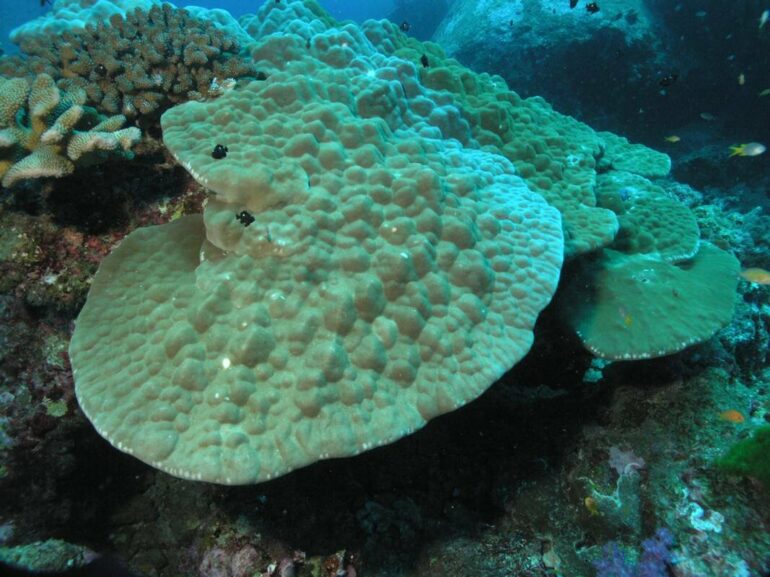 As waters grow warmer, the phenomenon of “coral bleaching” continues to spread. Yet not all corals are equally susceptible. An international team led by Cesar Pacherres and Moritz Holtappels from the Alfred Wegener Institute, Helmholtz Centre for Polar and Marine Research (AWI) in Bremerhaven and Soeren Ahmerkamp from the Max Planck Institute for Marine Microbiology in Bremen may have found the explanation: using minuscule filaments (cilia), corals can influence the currents in their immediate vicinity, protecting themselves from harmful oxygen concentrations, as the experts report in the journal Current Biology.

Coral reefs are not only one of the most biodiverse ecosystems on our planet; they are also among the most economically important ones. “For example, they’re extremely important for fishing and tourism,” says Moritz Holtappels. “And as wave breakers, they provide essential services for coastal management.” Accordingly, the experts are very concerned about the current status of these valuable undersea cities, which are simultaneously facing a variety of threats: the overfertilization and acidification of the ocean, as well as overly intensive fishing. Making matters worse, climate change is increasingly leading to the dreaded “coral bleaching.”

This happens when the water gets too warm for the reef-builders. Most of the small polyps that create these impressive calcium carbonate formations live in symbiosis with algae belonging to the dinoflagellates. They offer these organisms protection, and in return receive energy-rich sugar and other products that their “flatmates” produce from carbon dioxide and water with the aid of sunlight. But this process, known as photosynthesis, can become problematic when temperatures climb too high. Instead of providing the corals with energy, the algae release harmful substances. In response, the polyps “evict” them, causing the corals to lose their color—and in many cases, to die off completely. “But this doesn’t happen to all the corals in a reef,” Cesar Pacherres explains. “Some bleach out quickly, others, not at all.” What explains the difference in responses?

In order to find out, the researchers took a closer look at the complex relationship between the stony coral Porites lutea and its green neighbors. Apparently, one problem facing this underwater “shared flat” is that the algae’s photosynthesis releases large amounts of oxygen. Although vital for most flora and fauna, too much oxygen can be dangerous, particularly in warm water. When the concentration is too high, the algae’s photosynthesis organ increasingly processes oxygen instead of carbon dioxide. This is not only less efficient in terms of generating energy; it also produces dangerous oxygen radicals, which can harm cells. “When there’s too much sunlight, it’s hard for corals to get rid of this surplus oxygen,” says Pacherres. “Low water movement and high temperatures worsen this effect, known as oxidative stress, which is widely considered to be the main cause of coral bleaching.”

Using innovative methods, the experts followed the oxygen’s trail. What they learned was the algae producing the oxygen were by no means uniformly distributed among the corals examined. The algae were far denser in some areas than in others. “We expected to find the highest oxygen concentrations in the water above these photosynthesis hotspots,” says Soeren Ahmerkamp. “But much to our surprise, just the opposite was true.”

This finding contradicts the conventional theory regarding mass transfer between corals and their environs: until recently, the assumption had been that, once released substances left the tissue in question, they simply moved from regions with higher concentrations to those with lower concentrations via diffusion. But if that were true, the researchers should have found the highest oxygen concentrations where the most oxygen was produced. The only explanation for a different pattern is if the corals actively transport the element elsewhere. And thanks to cutting-edge surveillance technologies, they now know exactly how it’s done.

“The trick is that the tiny hairs, or cilia, on the corals’ surface, when moved in unison, create small eddies,” Ahmerkamp explains. In this way, the polyps can shape local currents in order to specifically ventilate those areas that are rich in algae. To do so, they direct oxygen-poor water from above to those areas with the highest algal densities, where it becomes charged with oxygen. In turn, the upward portion of the eddy produced flows away from the corals and releases its load higher up in the water column. Using a computer model, the researchers simulated the interplay between diffusion and ciliary action on the corals’ surface. As the simulation shows, by producing these local eddies near the algae, stony corals can cut the area of their surface exposed to critical oxygen concentrations in half.

“Accordingly, these sessile corals aren’t completely at the mercy of their marine environment, as was previously believed,” says Moritz Holtappels. Influencing the mass transfer with their surroundings in a targeted manner, and fanning away surplus oxygen, can be vital for these organisms—especially those growing in waters with little or no current. However, most likely not all corals have such a refined ventilation system. This could explain why some undergo more extreme bleaching than others in response to adverse conditions.


Citation:
Stony corals use a refined built-in ventilation system to protect themselves from environmental stressors (2022, August 26)