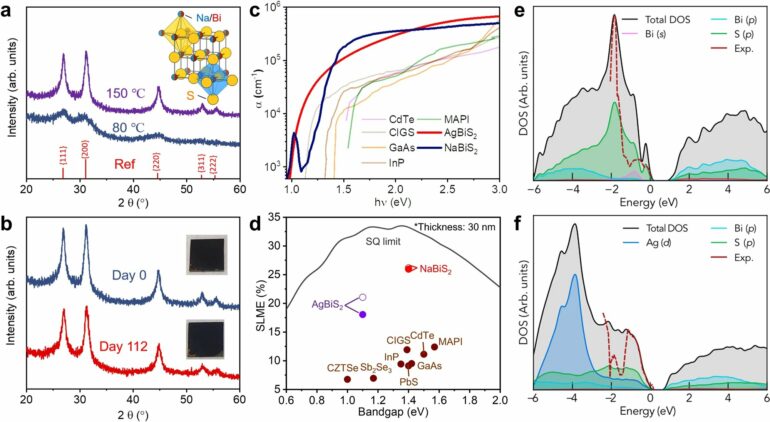 Solar cells are vital for the green energy transition. They can be used not only on rooftops and solar farms but also for powering autonomous vehicles, such as planes and satellites. However, photovoltaic solar cells are currently heavy and bulky, making them difficult to transport to remote locations off-grid, where they are much needed.

In a collaboration led by Imperial College London, alongside researchers from Cambridge, UCL, Oxford, Helmholtz-Zentrum Berlin in Germany, and others, researchers have produced materials that can absorb comparable levels of sunlight as conventional silicon solar cells, but with 10,000 times lower thickness.

The material is sodium bismuth sulfide (NaBiS2), which is grown as nanocrystals and deposited from solution to make films 30 nanometers in thickness. NaBiS2 is comprised of nontoxic elements that are sufficiently abundant in the earth’s crust for use commercially. For example, bismuth-based compounds are used as a nontoxic lead replacement in solder, or in over-the-counter stomach medicine.

Yi-Teng Huang, Ph.D. student at the University of Cambridge and co-first author, commented that they “have found a material that absorbs light more strongly than conventional solar cell technologies and can be printed from an ink. This technology has potential for making lightweight solar cells which can be easily transported or used in aerospace applications.”

Benefits of disorder and sodium

Critical factors to the strong light absorption are the effects of disorder and the role of sodium.

The sodium and bismuth ions in NaBiS2 have similar sizes, meaning that instead of occupying different crystallographic sites (ordered), they occupy the same site (disordered). As a result, the crystal structure changes to rocksalt, which resembles table salt. However, the sodium and bismuth are not uniformly distributed in the material, and this (in)homogeneity of disorder among these ions has a significant effect on absorption strength.

Seán Kavanagh, co-first author and Ph.D. student in the research groups of Prof Aron Walsh in the Department of Materials at Imperial, and Prof David Scanlon at UCL, commented that “disorder has long been seen as the enemy of solar cells. Known to kill efficiency in conventional solar materials like silicon (Si), cadmium telluride (CdTe) and gallium arsenide (GaAs), researchers have typically focused on avoiding it at all costs. This work, along with other recent studies from our and other groups, shows that this is not necessarily the case.”

“Rather if we can understand and control this disorder, it can present a powerful tool to tune material properties and yield record-breaking performance in a wide range of applications, not just solar cells but also LEDs and thermoelectrics, for instance. It’s an exciting prospect for materials research.”

Zooming in on a trillionth of a second

The researchers also found that disorder has a significant and unusual effect on the transport of photogenerated charges in the material. This was studied using spectroscopic techniques that probe processes occurring down to a trillionth of a second (picosecond), as well as computational modeling.

These studies found that an inhomogeneous distribution of sodium and bismuth ions results in localized electronic states forming, which rapidly capture charges. These charges live in these states for tens of microseconds, which is at least 100 times longer than in other novel semiconductors. However, the charges are trapped in these states and can only move by hopping between states, which ultimately limits their ability to move and be extracted as electricity.

Unusually, researchers also found that atomic defects play a negligible role in NaBiS2, because the transport of charges is dominated by the effects of these localized states. These results, therefore, demonstrate the importance of controlling the degree of disorder and understanding the influence on the electronic states in materials.

Researchers also found NaBiS2 to be stable in air for the entire duration of their 11-month test without any encapsulation required, which is in stark contrast to other novel photovoltaic materials, such as lead-halide perovskites. This suggests the long-term durability of the material in devices, which is a key requirement for commercial solar cells.

In Apps and WebCompaniesSmartphones
on 18 June 20216 min read

Researchers envisage that these findings will spark greater interest in NaBiS2 and similar materials, especially in understanding the role of cation disorder, and the interactions between charges and the crystal lattice.

Dr. Robert Hoye, Senior Lecturer in the Department of Materials at Imperial College London and corresponding author on the paper, commented that “these are very exciting results that open up new avenues to optimize the properties of solar energy harvesters. NaBiS2belongs to an intriguing family of materials, and we hope that the new insights generated in our work will guide the discovery and selection of a new generation of efficient and cost-effective photoactive compounds.”