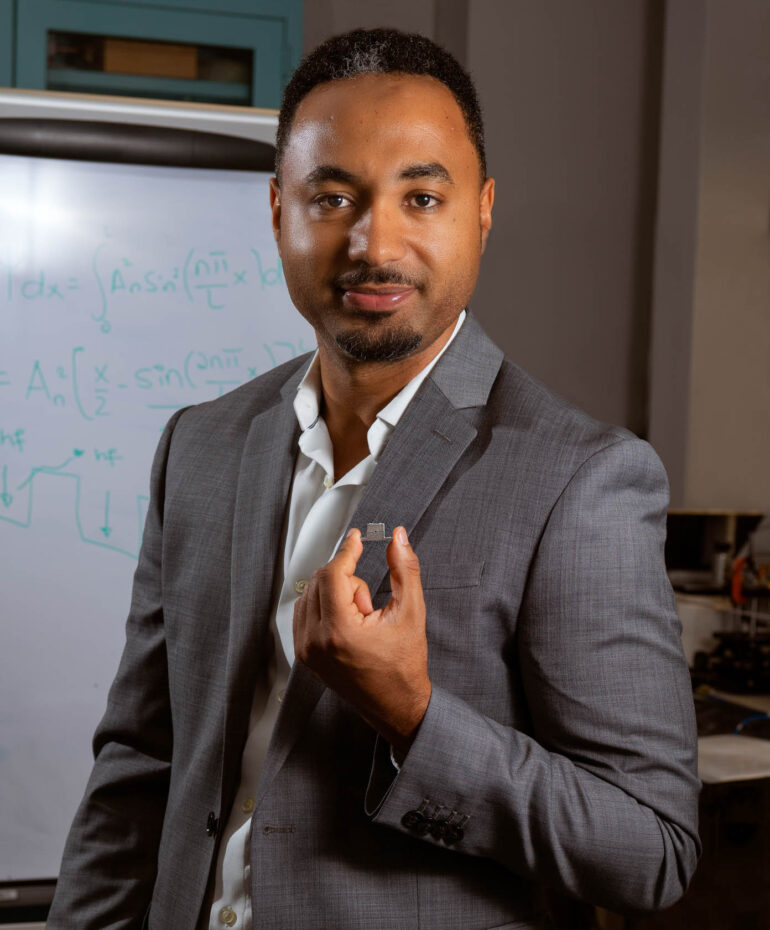 Finding water on the moon could be easier with a Goddard technology that uses an effect called quantum tunneling to generate a high-powered terahertz laser, filling a gap in existing laser technology.

Locating water and other resources is a NASA priority crucial to exploring Earth’s natural satellite and other objects in the solar system and beyond. Previous experiments inferred, then confirmed the existence of small amounts of water across the moon. However, most technologies do not distinguish among water, free hydrogen ions, and hydroxyl, as the broadband detectors used cannot distinguish between the different volatiles.

Goddard engineer Dr. Berhanu Bulcha said a type of instrument called a heterodyne spectrometer could zoom in on particular frequencies to definitively identify and locate water sources on the moon. It would need a stable, high-powered, terahertz laser, which was prototyped in collaboration with Longwave Photonics through NASA’s Small Business Innovation Research (SBIR) program.

“This laser allows us to open a new window to study this frequency spectrum,” he said. “Other missions found hydration on the moon, but that could indicate hydroxyl or water. If it’s water, where did it come from? Is it indigenous to the formation of the moon, or did it arrive later by comet impacts? How much water is there? We need to answer these questions because water is critical for survival and can be used to make fuel for further exploration.”

As the name implies, spectrometers detect spectra or wavelengths of light in order to reveal the chemical properties of matter that light has touched. Most spectrometers tend to operate across broad sections of the spectrum. Heterodyne instruments dial in to very specific light frequencies such as infrared or terahertz. Hydrogen-containing compounds like water emit photons in the terahertz frequency range—2 trillion to 10 trillion cycles per second—between microwave and infrared.

Like a microscope for subtle differences within a bandwidth like terahertz, heterodyne spectrometers combine a local laser source with incoming light. Measuring the difference between the laser source and the combined wavelength provides accurate readings between sub-bandwidths of the spectrum.

Traditional lasers generate light by exciting an electron within an atom’s outer shell, which then emits a single photon as it transitions, or returns to its resting energy level. Different atoms produce different frequencies of light based on the fixed amount of energy it takes to excite one electron. However, lasers fall short in a particular portion of the spectrum between infrared and microwave known as the terahertz gap.

“The problem with existing laser technology,” Dr. Bulcha said, “is that no materials have the right properties to produce a terahertz wave.”

Electromagnetic oscillators like those that generate radio or microwave frequencies produce low-powered terahertz pulses by using a series of amplifiers and frequency multipliers to extend the signal into the terahertz range. However, this process consumes a lot of voltage, and the materials used to amplify and multiply the pulse have limited efficiency. This means they lose power as they approach the terahertz frequencies.

From the other side of the terahertz gap, optical lasers pump energy into a gas to generate photons. However, high-powered, terahertz-band lasers are large, power hungry, and not suitable for space exploration purposes where mass and power are limited, particularly hand-held or Small Satellite applications. The power of the pulse also drops as optical lasers push towards the terahertz bandwidths.

To fill that gap, Dr. Bulcha’s team is developing quantum cascade lasers that produce photons from each electron transition event by taking advantage of some unique, quantum-scale physics of materials layered just a few atoms thick.

In these materials, a laser emits photons in a specific frequency determined by the thickness of alternating layers of semiconductors rather than the elements in the material. In quantum physics, the thin layers increase the chance that a photon can then tunnel through to the next layer instead of bouncing off the barrier. Once there, it excites additional photons. Using a generator material with 80 to 100 layers, totaling less than 10 to 15 microns thick, the team’s source creates a cascade of terahertz-energy photons.

This cascade consumes less voltage to generate a stable, high-powered light. One drawback of this technology is its beam spreads out in a large angle, dissipating quickly over short distances. Using innovative technology supported by Goddard’s Internal Research and Development (IRAD) funding, Dr. Bulcha and his team integrated the laser on a waveguide with a thin optical antenna to tighten the beam. The integrated laser and waveguide unit reduces this dissipation by 50% in a package smaller than a quarter.

He hopes to continue the work to make a flight-ready laser for NASA’s Artemis program.

The laser’s low size and power consumption allow it to fit in a 1U CubeSat, about the size of a teapot, along with the spectrometer hardware, processor, and power supply. It could also power a handheld device for use by future explorers on the moon, Mars, and beyond.