For the first time, researchers have observed an X-ray explosion on a white dwarf 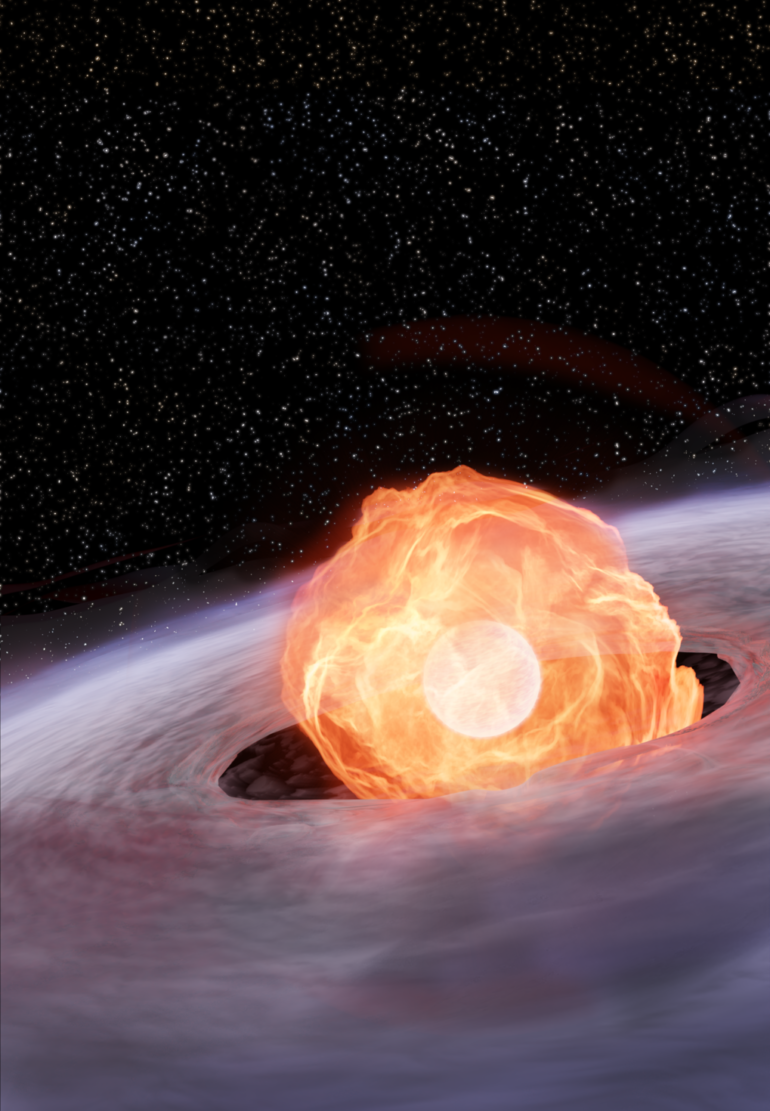 When stars like our sun use up all their fuel, they shrink to form white dwarfs. Sometimes such dead stars flare back to life in a super-hot explosion and produce a fireball of X-ray radiation. A research team from several German institutes including Tübingen University, and led by Friedrich-Alexander-Universität Erlangen-Nürnberg (FAU), has now been able to observe such an explosion of X-ray light for the very first time.

“It was to some extent a fortunate coincidence, really,” explains Ole König from the Astronomical Institute at FAU in the Dr. Karl Remeis observatory in Bamberg, who has published an article about this observation in the journal Nature, together with Prof. Dr. Jörn Wilms and a research team from the Max Planck Institute for Extraterrestrial Physics, the University of Tübingen, the Universitat Politécnica de Catalunya in Barcelona and the Leibniz Institute for Astrophysics Potsdam. “These X-ray flashes last only a few hours and are almost impossible to predict, but the observational instrument must be pointed directly at the explosion at exactly the right time,” explains the astrophysicist.

The instrument in this case is the eROSITA X-ray telescope, which is currently located one and a half million kilometers from Earth and has been surveying the sky for soft X-rays since 2019. On July 7, 2020, it measured strong X-ray radiation in an area of the sky that had been completely inconspicuous four hours earlier. When the X-ray telescope surveyed the same position in the sky four hours later, the radiation had disappeared. It follows that the X-ray flash that had previously completely overexposed the center of the detector must have lasted less than eight hours.

X-ray explosions such as this were predicted by theoretical research more than 30 years ago but have never been observed directly until now. These fireballs of X-rays occur on the surface of stars that were originally comparable in size to the sun before using up most of their fuel made of hydrogen, and later helium, deep inside their cores. These stellar corpses shrink until white dwarfs remain, which are similar to Earth in size but contain a mass that can be similar to that of our sun. “One way to picture these proportions is to think of the sun being the same size as an apple, which means Earth would be the same size as a pin head orbiting around the apple at a distance of 10 meters,” explains Jörn Wilms.

“These so-called novae do happen all the time, but detecting them during the very first moments when most of the X-ray emission is produced is really hard,” adds Dr. Victor Doroshenko from Tübingen University. “Not only the short duration of a flash is a challenge, but also the fact that the spectrum of emitted X-rays is very soft. Soft X-rays are not very energetic and easily absorbed by interstellar medium, so we cannot see very far in this band, which limits the number of observable objects, be it a nova or ordinary star. Telescopes are normally designed to be most effective in harder X-rays where absorption is less important, and that’s exactly the reason why they would miss an event like this,” concludes Victor Doroshenko.

On the other hand, if you were to shrink an apple to the size of a pin head, this tiny particle would retain the comparatively large weight of the apple. “A teaspoon of matter from the inside of a white dwarf easily has the same mass as a large truc” Jörn Wilms continues. Since these burnt-out stars are mainly made up of oxygen and carbon, we can compare them to gigantic diamonds that are the same size as Earth floating around in space. These objects in the form of precious gems are so hot they glow white. However, the radiation is so weak that it is difficult to detect from Earth.

That is true unless the white dwarf is accompanied by a star that is still burning, and when the enormous gravitational pull of the white dwarf draws hydrogen from the shell of the accompanying star. “In time, this hydrogen can collect to form a layer only a few meters thick on the surface of the white dwarf,” explains FAU astrophysicist Jörn Wilms. In this layer, the huge gravitational pull generates enormous pressure that is so great that it causes the star to reignite. In a chain reaction, it soon comes to a huge explosion during which the layer of hydrogen is blown off. The X-ray radiation of an explosion like this is what hit the detectors of eROSITA on July 7, 2020, producing an overexposed image.

“The physical origin of X-ray emission coming [from] white dwarf atmospheres is relatively well understood, and we can model their spectra from first principles and in exquisite detail. Comparison of models with observations allows [us] then to learn basic properties of these objects such as weight, size, or chemical composition,” explains Dr. Valery Suleimanov from Tübingen University.

“The problem in this particular case was, however, that after 30 years with no photons we suddenly had too many, which distorted the spectral response of eROSITA, which was designed to detect millions of very faint objects rather than one but very bright,” adds Victor Doroshenko.

“Using the model calculations we originally drew up while supporting the development of the X-ray instrument, we were able to analyze the overexposed image in more detail during a complex process to gain a behind the scenes view of an explosion of a white dwarf, or nova,” explains Jörn Wilms.

According to the results, the white dwarf has around the mass of our sun and is therefore relatively large. The explosion generated a fireball with a temperature of around 327,000 Kelvin, making it around 60 times hotter than the sun. “These parameters were obtained by combining models of X-ray radiation with the models of radiation emitted by very hot white dwarfs created in Tübingen by Valery Suleimanov and Victor Doroshenko, and very deep analysis of instrument response in a regime far outside specifications carried out at FAU and MPE. I think it illustrates very nicely the importance of collaboration in modern science, and wide range of expertise within the German eROSITA consortium,” adds Prof. Dr. Klaus Werner from Tübingen University.

Since these novae run out of fuel quite quickly, they cool rapidly and the X-ray radiation becomes weaker until it eventually becomes visible light, which reached Earth half a day after the eROSITA detection and was observed by optical telescopes. “A seemingly bright star then appeared, which was actually the visible light from the explosion, and so bright that it could be seen on the night sky by the bare eye,” explains Ole König. Seemingly “new stars” such as this one have been observed in the past and were named “nova stella,” or “new star” on account of their unexpected appearance. Since these novae are only visible after the X-ray flash, it is very difficult to predict such outbreaks and it is mainly down to chance when they hit the X-ray detectors. “We were really lucky,” says Ole König.


Citation:
For the first time, researchers have observed an X-ray explosion on a white dwarf (2022, May 11)