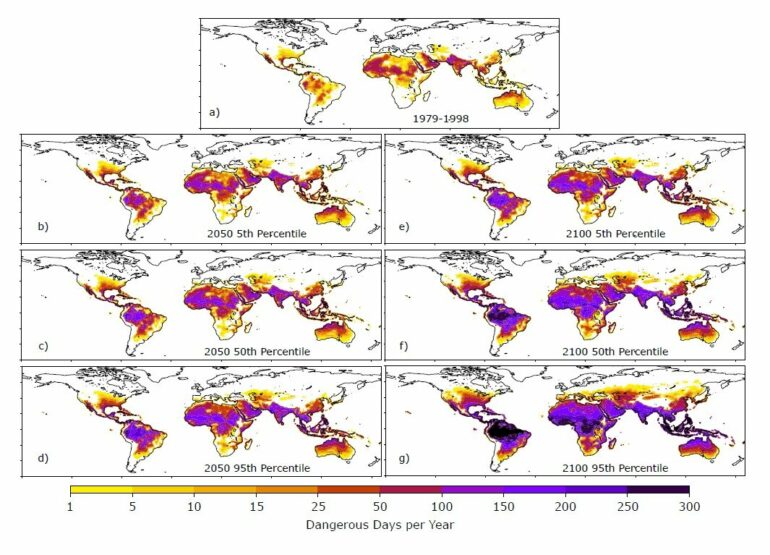 Record-breaking heat waves have occurred recently from Delhi to the Pacific Northwest, and the number of these deadly events is expected to increase. New research from the University of Washington and Harvard University gives a range of heat impacts worldwide by the end of this century, depending on future emissions of greenhouse gases.

The study was published Aug. 25 in the open-access journal Communications Earth & Environment.

“The record-breaking heat events of recent summers will become much more common in places like North America and Europe,” said lead author Lucas Vargas Zeppetello, who did the research as a doctoral student at the UW and is now a postdoctoral researcher at Harvard. “For many places close to the equator, by 2100 more than half the year will be a challenge to work outside, even if we begin to curb emissions.”

“Our study shows a broad range of possible scenarios for 2100,” he added. “This shows that the emissions choices we make now still matter for creating a habitable future.”

“These standards were first created for people working indoors in places like boiler rooms—they were not thought of as conditions that would happen in outdoor, ambient environments. But we are seeing them now,” Vargas Zeppetello said.

The study finds that even if countries manage to meet the Paris Agreement goal of keeping warming to 2 C, crossing the “dangerous” threshold will be three to 10 times more common by 2100 in the U.S., Western Europe, China and Japan. In that same scenario, dangerous days could double by 2100 in the tropics, covering half the year.

In a worst-case scenario in which emissions remain unchecked until 2100, “extremely dangerous” conditions, in which humans should not be outdoors for any amount of time, could become common in countries closer to the equator—notably in India and sub-Saharan Africa.

“It’s extremely frightening to think what would happen if 30 to 40 days a year were exceeding the extremely dangerous threshold,” Vargas Zeppetello said. “These are frightening scenarios that we still have the capacity to prevent. This study shows you the abyss, but it also shows you that we have some agency to prevent these scenarios from happening.”

The study uses a probability-based method to calculate the range of future conditions. Instead of using the four future emissions pathways included in the Intergovernmental Panel on Climate Change reports, the authors use a statistical approach that combines historical data with population projections, economic growth and carbon intensity—the amount of carbon emitted for each dollar of economic activity—to predict the likely range of future CO2 concentrations.

The statistical approach “gives plausible ranges for carbon emissions and future temperature and has been estimated statistically from and validated against historical data,” said co-author Adrian Raftery, a UW professor of statistics and of sociology with an adjunct appointment in atmospheric sciences.

The authors translated the higher carbon dioxide levels into a range of global temperature increases, then looked at how that would affect global monthly weather patterns.

“The number of days with dangerous levels of heat in the mid-latitudes—including the southeastern and central U.S.—will more than double by 2050,” said co-author David Battisti, a professor of atmospheric sciences at the UW. “Even for the very low-end estimates of carbon emissions and climate response, by 2100 much of the tropics will experience ‘dangerous’ levels of heat stress for nearly half the year.”

The results underline the need to both reduce future greenhouse gas emissions and to protect populations, especially outdoor workers, against dangerous heat.