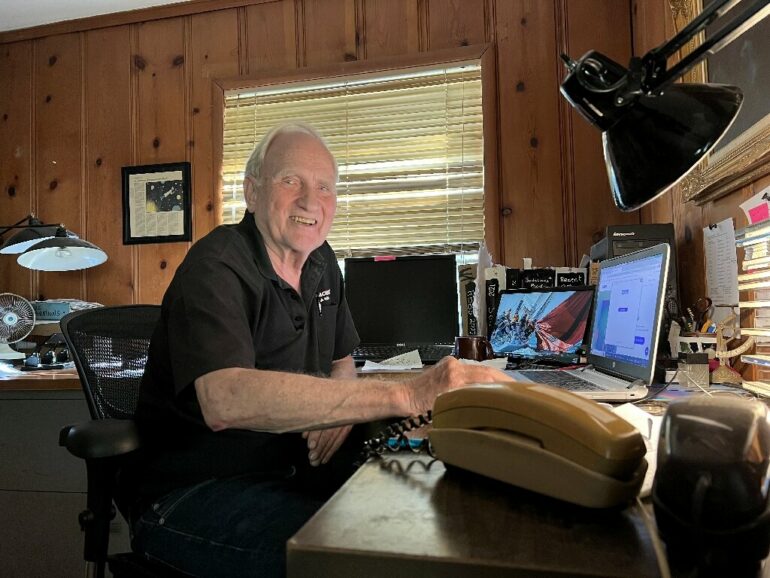 American physicist John Clauser won the 2022 Nobel Prize for a groundbreaking experiment vindicating quantum mechanics—a fundamental theory governing the subatomic world that is today the foundation for an emerging class of ultra-powerful computers.

But when he carried out his work in the 1970s, Clauser was actually hoping for the opposite result: to upend the field and prove Albert Einstein had been right to dismiss it, he told AFP in an interview.

“The truth is that I strongly hoped that Einstein would win, which would mean that quantum mechanics was giving incorrect predictions,” the 79-year-old said, speaking by telephone from his home in Walnut Creek, just outside San Francisco.

Born in Pasadena in 1942, Clauser credits his father, an engineer who designed planes in the war and founded the aeronautics department at Johns Hopkins University in Baltimore, for instilling in him a lifelong love of science.

“I used to wander around his laboratory and say ‘Wow, oh boy, when I grow up I want to be a scientist so I can play with these fun toys too.'”

As a graduate student at Columbia in the mid-1960s, he grew interested in quantum physics alongside his thesis work on radio astronomy.

The fact that this occurred instantly contradicted Einstein’s theory of relativity which held that nothing—including information—can travel faster than the speed of light.

In 1935 he dismissed this element of quantum entanglement—called nonlocality—as “spooky action at a distance.”

Einstein instead believed that “hidden variables” that instructed the particles what state to take must be at play, placing him at odds with his great friend but intellectual adversary Niels Bohr, a founding father of quantum theory.

In 1964, the Northern Irish physicist John Bell proposed a theoretical way to measure whether there were in fact hidden variables inside quantum particles. Clauser realized he could resolve the long standing Bohr-Einstein debate if he could create the right experiment.

“My thesis advisor thought it was a distraction from my work in astrophysics,” he recalled, but undeterred, he wrote to Bell, who encouraged him to take up the idea.

It wasn’t until Clauser had completed his doctorate and taken up a job at UC Berkeley that he was actually able to start working on the experiment, along with collaborator Stuart Freedman.

They focused a laser on calcium atoms, making it emit particles of entangled photon pairs that shot off in opposite directions, and used filters set to the side to measure whether they were correlated.

After hundreds of thousands of runs, they found the pairs correlated more than Einstein would have predicted, proving the reality of “spooky action” with hard data.

At the time, leading lights of the field were unimpressed, said Clauser, including the renowned physicist Richard Feynman who told him the work was “totally silly, you’re wasting everybody’s time and money” and threw him out his office.

Questioning the foundation of quantum mechanics was deemed unnecessary.

That wasn’t the view of the Nobel committee, who awarded Clauser, Alain Aspect of France, and Anton Zeilinger of Austria the world’s most prestigious science prize for their pioneering work in advancing the field.

“It took a long time for people to realize the importance of the work,” chuckled Clauser.

“But I suppose it is a certain vindication, everyone was telling me it was silly.”

Einstein’s theory had more appeal to Clauser than Bohr’s, which he confessed to not fully grasping.

But over time, he came to realize the true value of his and his co-winners’ experiments. Demonstrating that a single bit of information can be distributed through space is today at the core of quantum computers.