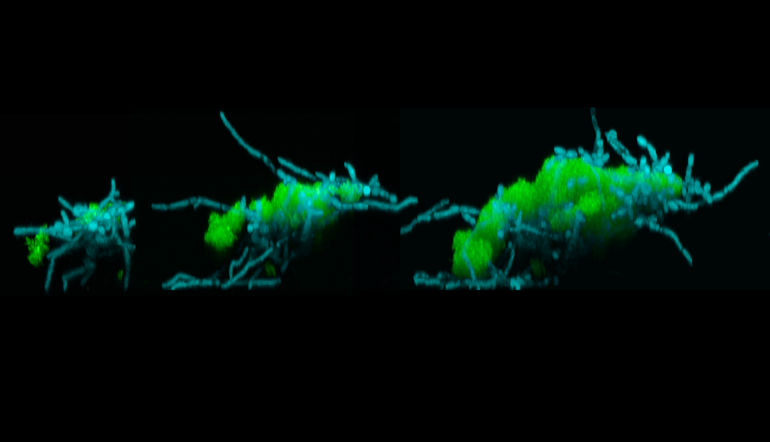 Across-kingdom partnership between bacteria and fungi can result in the two joining to form a “superorganism” with unusual strength and resilience. It may sound like the stuff of science fiction, but these microbial groupings are very much part of the here and now.

Found in the saliva of toddlers with severe childhood tooth decay, these assemblages can effectively colonize teeth. They were stickier, more resistant to antimicrobials, and more difficult to remove from teeth than either the bacteria or the fungi alone, according to the research team, led by University of Pennsylvania School of Dental Medicine scientists.

What’s more, the assemblages unexpectedly sprout “limbs” that propel them to “walk” and “leap” to quickly spread on the tooth surface, despite each microbe on its own being non-motile, the team reported in the journal Proceedings of the National Academy of Sciences.

“This started with a very simple, almost accidental discovery, while looking at saliva samples from toddlers who develop aggressive tooth decay,” says Hyun (Michel) Koo, a professor at Penn Dental Medicine and a co-corresponding author on the paper. “Looking under the microscope, we noticed the bacteria and fungi forming these assemblages and developing motions we never thought they would possess: a ‘walking-like’ and ‘leaping-like’ mobility. They have a lot of what we call ’emergent functions’ that bring new benefits to this assemblage that they could not achieve on their own. It’s almost like a new organism—a superorganism—with new functions.”

Better (or worse) together

In the past, Koo’s lab has focused on the dental biofilm, or plaque, present in children with severe tooth decay, discovering that both bacteria—Streptococcus mutans—and fungi—Candida albicans—contribute to the disease. Caries, commonly known as cavities, arise when sugars in the diet linger to feed bacteria and fungi in the mouth, leading to acid-producing dental plaque that destroys enamel.

The new set of discoveries came about when Zhi Ren, a postdoctoral fellow in Koo’s group, was using microscopy that allows scientists to visualize the behavior of living microbes in real time. The technique “opens new possibilities to investigate the dynamics of complex biological processes,” says Ren, a first author on the paper and part of the first cohort of the NIDCR T90R90 postdoctoral training program within Penn’s Center for Innovation & Precision Dentistry.

After seeing the bacterial-fungal clusters present in the saliva samples, Ren, Koo, and colleagues were curious how the groupings might behave once attached to the surface of a tooth. Thus began a series of experiments using real-time live microscopy to observe the process of attachment and eventual growth.

They created a laboratory system to recreate the formation of these assemblages, using the bacteria, fungi, and a tooth-like material, all incubated in human saliva. The platform enabled the researchers to watch the groupings come together and to analyze the structure of the resulting assemblages. They found a highly organized structure with bacterial clusters attached in a complex network of fungal yeast and filament-like projections called hyphae, all enmeshed in an extracellular polymer, a glue-like material.

Next the team tested the properties of these cross-kingdom assemblages once they had colonized the tooth surface and found “surprising behaviors and emergent properties,” says Ren, “including enhanced surface adhesion, making them very sticky, and increased mechanical and antimicrobial tolerance, making them tough to remove or kill.”

Perhaps the most intriguing characteristic of the assemblages, the researchers say, was their mobility. “They displayed ‘leaping-like’ and ‘walking-like’ motions while continuously growing,” Ren says.

While some bacteria can propel themselves using appendages like flagella, the microbial species in the current study are both non-motile. And differing from any known microbial motility, the assemblages used the fungal hyphae to anchor on the surface and then propel the whole superorganism forward, transporting the attached bacteria across the surface, Koo says, “like bacteria hitchhiking on the fungi.”

The microbial groupings moved fast and far, the researchers found. On the tooth-like surface, the team measured velocities of more than 40 microns per hour, similar to the speed of fibroblasts, a type of cell in the human body involved in wound healing. Within the first hours of growth, the scientists observed the assemblages “leaping” more than 100 microns across the surface. “That is more than 200 times their own body length,” says Ren, “making them even better than most vertebrates, relative to body size. For example, tree frogs and grasshoppers can leap forward about 50 times and 20 times their own body length, respectively.”

Although the exact mechanisms are unknown, the assemblages’ ability to “move as they grow,” the researchers say, has one clear consequence: It enables them to quickly colonize and spread to new surfaces. When the research team allowed the assemblages to attach to and grow on real human teeth in a laboratory model, they found more extensive tooth decay as a result of a rapidly spreading biofilm.

Disease treatment and biology at large

Because these assemblages are found in saliva, targeting them early on could be a therapeutic strategy to prevent childhood tooth decay, says Koo. “If you block this binding or disrupt the assemblage before it arrives on the tooth and causes damage, that could be a preventive strategy.”

And beyond the applications for treating this specific disease, the researchers say, the new findings might be applicable in microbial biology in general. For example, aggregated organisms found in other biological fluids or aquatic ecosystems may similarly enhance surface colonization and growth to cause infectious diseases or environmental contamination.

“We saw that these two distinct organisms assemble together as a new organismal entity that gave each one additional benefits and functions that single cells did not have on their own,” says Koo. The findings could even shed light on the evolution of mutualism and multicellularity that enhances the survival and grow of single organisms when they unite and work together as a unit in a given environment, the team notes.

“This discovery of a ‘bad guy’ superorganism is really ground-breaking and unanticipated,” says Knut Drescher of the University of Basel, a co-corresponding author on the paper. “No one would have predicted this. Zhi accidentally stumbled across this by keeping an open mind.”


Citation:
Microbes that cause cavities can form superorganisms able to ‘crawl’ and spread on teeth (2022, October 5)