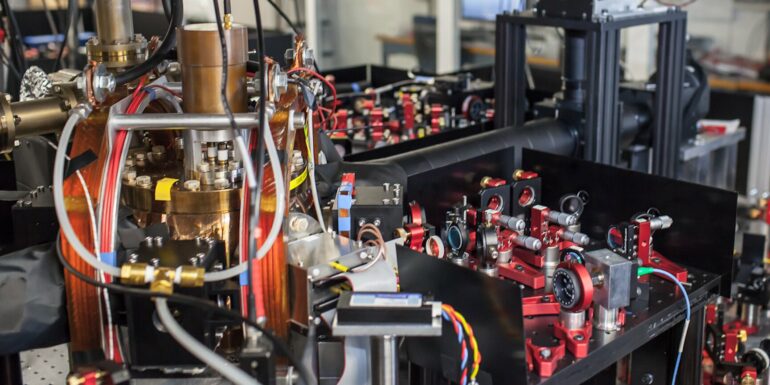 ETH physicists have modified one of the major schemes for quantum error correction and put it into practice, demonstrating that they can substantially prolong the lifetime of quantum states—a crucial ingredient for future large-scale quantum computers.

In modern computing devices, literally billions of transistors work restlessly in almost perfect harmony. The keys to producing near-perfect computation from devices made from imperfect components are the use of digitisation and error correction, with the latter encompassing procedures to detect and rectify inaccuracies as they occur. The challenge of preventing errors from accumulating is one that future quantum computers have to face as well—in fact it forms the main barrier to realizing useful computations. Alas, the tools that have been perfected for classical computers cannot be applied directly to quantum computers, which play by another set of rules, those of quantum mechanics. Ingenious solutions for quantum error correction have been proposed over the past couple of decades, and recently there has been encouraging progress towards implementing such methods in state-of-the-art quantum computers. Writing in Nature Physics, the group of Prof. Jonathan Home at the Institute for Quantum Electronics report such an experimental realization—one that stands out by factoring in important limitations of physically realistic devices and by being relatively easy to implement compared to other proposed error-correction schemes, thus increasing the relevance of the demonstration for practical quantum computation.

Allowing a quantum of error

The way information is processed in quantum computers differs fundamentally from that in their classical counterparts. This opens up unique computational capabilities, but also calls for novel strategies to deal with errors that occur in the process. More specifically, quantum information cannot be perfectly duplicated, and measurements inevitably alter the fragile quantum states. Nevertheless, with some creative rethinking it is possible to devise measurements that can tell us whether the quantum information has been disturbed. As with classical error correction, the key is to harness redundancy.

Among the innovative ideas that have emerged for quantum error correction, the so-called Gottesman–Kitaev–Preskill (GKP) code is a particularly promising one, using flexible control of a single oscillator to avoid having to control many different individual physical carriers of quantum information. It encodes discrete quantum information in the continuous space of a quantum system, forcing it to be positioned at regularly spaced points forming a comb with teeth at fixed intervals, effectively digitizing space (see image below). Information is stored in the size of the comb teeth. Small displacements of the comb in position can be corrected, so long as they do not cause neighboring teeth to overlap. While this scheme was proposed in 2001, an experimental demonstration of error correction with GKP codes came only in 2020, but the degree of error correction that could be achieved was somewhat limited. This is because the GKP code is exact only for quantum states of infinite energy, whereas experiments naturally involve finite-energy states. Brennan de Neeve, a doctoral student in the Home group, Dr. Thanh-Long Nguyen, a postdoctoral researcher there, and Tanja Behrle, another doctoral student, have now tackled just that issue.

The team used a platform in which quantum information is encoded in the mechanical oscillator motion of a single trapped ion. This was the same system in which the Home group pioneered the generation and control of logical states of the GKP code. Building on these capabilities, de Neeve et al. now designed and implemented a novel measurement scheme that is optimized for finite-energy states. Their approach is relatively simple to realize, in that it makes use of damping processes which avoid having to measure the quantum state and subsequently apply classically controlled feedback. Putting the new method into practice, they demonstrated efficient correction of unwanted displacements in the motion of their quantum oscillator. As a result, they extended the coherence time (in essence the lifetime of the quantum state) by a factor of three, setting a benchmark for quantum computing systems.

Such prolonged coherence times are important, as they translate directly into more time for executing quantum computations, a key ‘currency’ when it comes to practical devices. The work therefore addresses one of the grand challenges in the field of quantum computing. Moreover, the new approach uses variants of well-established techniques in the tool chest of experimental quantum physics, inspiring confidence that it can be pushed even further. Combined with progress on other fronts, this brings us ever closer to eventually enabling quantum computers to perform calculations with arbitrary precision, even if constructed from fault-prone components.