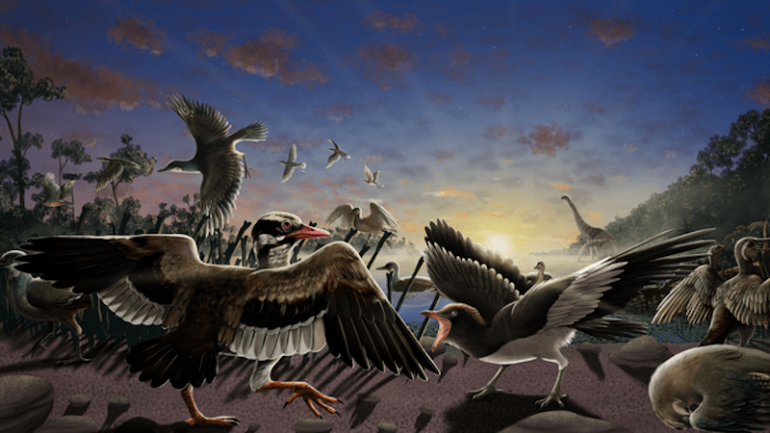 Approximately 80 miles from the westernmost reach of China’s Great Wall, paleontologists found relics of an even more ancient world. Over the last two decades, teams of researchers unearthed more than 100 specimens of fossil birds that lived approximately 120 million years ago, during the time of the dinosaurs. However, many of these fossils have proved difficult to identify: they’re incomplete and sometimes badly crushed. In a new paper published in the Journal of Systematics and Evolution, researchers examined six of these fossils and identified two new species. And as a fun side note, one of those new species had a movable bony appendage at the tip of its lower jaw that may have helped the bird root for food.

“It was a long, painstaking process teasing out what these things were,” says Jingmai O’Connor, the study’s lead author and the associate curator of vertebrate paleontology at Chicago’s Field Museum. “But these new specimens include two new species that increase our knowledge of Cretaceous bird faunas, and we found combinations of dental features that we’ve never seen in any other dinosaurs.”

“These fossils come from a site in China that has produced fossils of birds that are pretty darned close to modern birds, but all the bird fossils described thus far haven’t had skulls preserved with the bodies,” says co-author Jerry Harris of Utah Tech University. “These new skull specimens help fill in that gap in our knowledge of the birds from this site and of bird evolution as a whole.”

All birds are dinosaurs, but not all dinosaurs are birds; a small group of dinosaurs evolved into birds that coexisted with other dinosaurs for 90 million years. Modern birds are the descendants of the group of birds that survived the extinction that killed the rest of the dinosaurs, but many prehistoric birds went extinct then too. O’Connor’s work focuses on studying different groups of early birds to figure out why some survived while others went extinct.

The fossil site in northwestern China, called Changma, is an important place for researchers like O’Connor studying bird evolution. It’s the second-richest Mesozoic (time of the dinosaurs) fossil bird site in the world, but more than half of the fossils found there belong to the same species, Gansus yumenensis. Determining which fossils are Gansus and which ones aren’t is tricky; the six specimens that O’Connor and her colleagues examined in this study are primarily just skulls and necks, parts not preserved in known specimens of Gansus. The fossils were also somewhat smushed by their time deep in the Earth, which made analyzing them difficult.

“The Changma site is a special place,” says study co-author Matt Lamanna of Pittsburgh’s Carnegie Museum of Natural History. “The fossil-bearing rocks there tend to split into thin sheets along ancient bedding planes. So, when you’re digging, it’s like you’re literally turning back the pages of history, layer by layer uncovering animals and plants that haven’t seen the light of day in roughly 120 million years.”

“Because the specimens were pretty flattened, CT-scanning them and fully segmenting them could take years and might not even give you that much information, because these thin bones are flattened into almost the same plane, and then it just becomes almost impossible to figure out where the boundaries of these bones are,” says O’Connor. “So we had to kind of work with what was exposed.” Through painstaking work, the researchers were able to identify key features in the birds’ jaws that showed that two of the six specimens were unknown to science.

The new species (or, more accurately, new genera—genus is a step above species in the order scientists use to name organisms) are called Meemannavis ductrix and Brevidentavis zhangi. Meemannavis is named for Meemann Chang, a Chinese paleontologist who became the first woman to lead the Institute of Vertebrate Paleontology and Paleoanthropology (IVPP) in Beijing. The name Brevidentavis means “short-toothed bird.” Like Gansus, both Meemannavis and Brevidentavis are ornithuromorph birds—the group that contains modern birds. Like today’s birds, Meemannavis was toothless. Brevidentavis, on the other hand, had small, peg-like teeth packed close together in its mouth. Along with those teeth came another strange feature.

“Brevidentavis is an ornithuromorph bird with teeth, and in ornithuromorphs with teeth, there’s a little bone at the front of the jaw called the predentary, where its chin would be if birds had chins,” explains O’Connor. In a previous study on the predentary in another fossil bird, the authors figured out, by CT-scanning the bone and staining it with chemicals, that the predentary bone underwent stress and also found a kind of cartilage that only forms when there’s movement.

“In this earlier study, we were able to tell that the predentary was capable of being moved, and that it would have been innervated – Brevidentavis wouldn’t just have been able to move its predentary, it would have been able to feel through it,” says O’Connor. “It could have helped them detect prey. We can hypothesize that these toothed birds had little beaks with some kind of movable pincer at the tip of their jaws in front of the teeth.”

Brevidentavis isn’t the first fossil bird discovered with a predentary that might have been used in this way, but its existence, along with Meemannavis, helps round out our understanding of the diversity of prehistoric birds, especially in the Changma region.

The study also helps shed light on the most common bird from the site, Gansus, since at least four of the other specimens examined probably belong to this species. “Gansus is the first known true Mesozoic bird in the world, as Archaeopteryx is more dinosaur-like, and now we know what its skull looks like after about 40 years,” notes Hai-Lu You of the IVPP.

“These amazing fossils are like a lockpick allowing us to open the door to greater knowledge of the evolutionary history of the skull in close relatives of living birds,” says Tom Stidham, a co-author from the IVPP. “At a time when giant dinosaurs still roamed the land, these birds were the products of evolution experimenting with different lifestyles in the water, in the air, and on land, and with different diets as we can see in some species having or lacking teeth. Very few fossils of this geological age provide the level of anatomical detail that we can see in these ancient bird skulls.”

“These discoveries strengthen the hypothesis that the Changma locality is unusual in that it is dominated by ornithuromorph birds, which is uncommon in the Cretaceous,” says O’Connor. “Learning about these relatives of modern birds can ultimately help us understand why today’s birds made it when the others didn’t.”