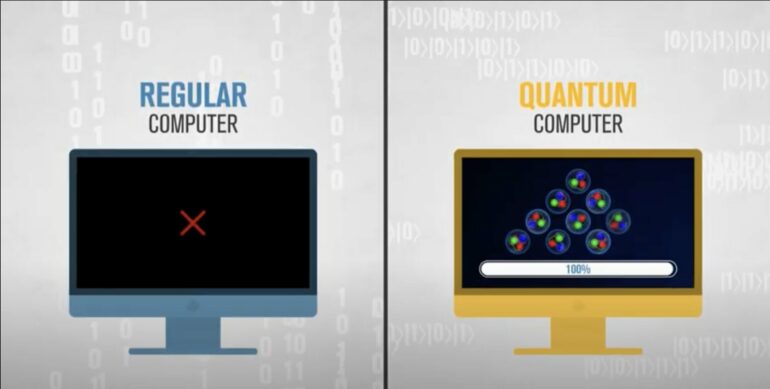 A team of researchers led by an Institute for Quantum Computing (IQC) faculty member performed the first-ever simulation of baryons—fundamental quantum particles—on a quantum computer.

With their results, the team has taken a step towards more complex quantum simulations that will allow scientists to study neutron stars, learn more about the earliest moments of the universe, and realize the revolutionary potential of quantum computers.

“This is an important step forward—it is the first simulation of baryons on a quantum computer ever,” Christine Muschik, an IQC faculty member, said. “Instead of smashing particles in an accelerator, a quantum computer may one day allow us to simulate these interactions that we use to study the origins of the universe and so much more.”

Muschik, also a physics and astronomy professor at the University of Waterloo and associate faculty member at the Perimeter Institute, leads the Quantum Interactions Group, which studies the quantum simulation of lattice gauge theories. These theories are descriptions of the physics of reality, including the Standard Model of particle physics. The more inclusive a gauge theory is of fields, forces, particles, spatial dimensions and other parameters, the more complex it is—and the more difficult it is for a classical supercomputer to model.

Non-Abelian gauge theories are particularly interesting candidates for simulations because they are responsible for the stability of matter as we know it. Classical computers can simulate the non-Abelian matter described in these theories, but there are important situations—such as matter with high densities—that are inaccessible for regular computers. And while the ability to describe and simulate non-Abelian matter is fundamental for being able to describe our universe, none has ever been simulated on a quantum computer.

Working with Randy Lewis from York University, Muschik’s team at IQC developed a resource-efficient quantum algorithm that allowed them to simulate a system within a simple non-Abelian gauge theory on IBM’s cloud quantum computer paired with a classical computer.

With this landmark step, the researchers are blazing a trail towards the quantum simulation of gauge theories far beyond the capabilities and resources of even the most powerful supercomputers in the world.

“What’s exciting about these results for us is that the theory can be made so much more complicated,” Jinglei Zhang, a postdoctoral fellow at IQC and the University of Waterloo Department of Physics and Astronomy, said. “We can consider simulating matter at higher densities, which is beyond the capability of classical computers.”

As scientists develop more powerful quantum computers and quantum algorithms, they will be able to simulate the physics of these more complex non-Abelian gauge theories and study fascinating phenomena beyond the reach of our best supercomputers.

This breakthrough demonstration is an important step towards a new era of understanding the universe based on quantum simulation.

The paper, “SU(2) hadrons on a quantum computer via a variational approach,” was published in Nature Communications today.