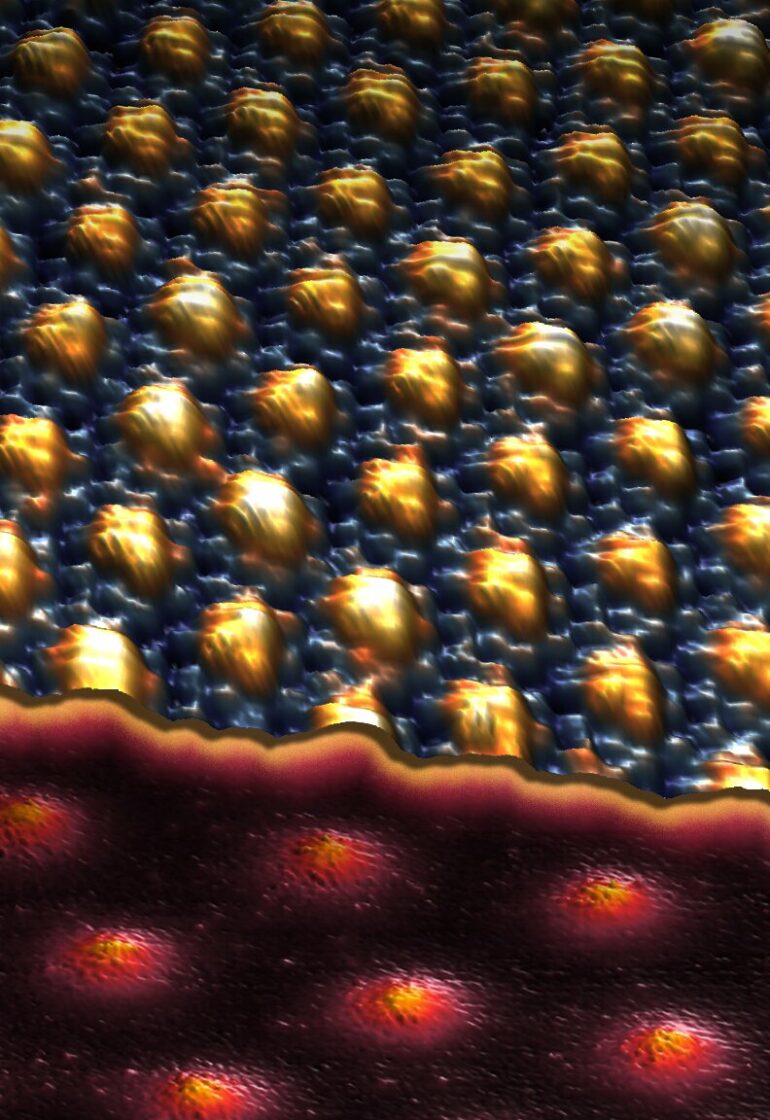 Artistic representation of a topographic CDW image of a top 1T-TaS2 layer and a spectroscopic image of vortices on the bottom superconducting 1H-TaS2 layer with a schematic edge mode bound to the interface. Nayak et al.

Topological superconductors are a class of superconducting materials characterized by sub-gap zero energy localized modes, known as Majorana boundary states (MBSs). These materials are promising for the development of quantum computing technology.

Researchers at Weizmann Institute of Science and Technion in Israel have recently gathered evidence of topological superconductivity in 4Hb-TaS2, a new material realized by one of their colleagues. Their paper, published in Nature Physics, could have important implications for the future development of various quantum devices.

“In early 2019, Amit Kanigel at Technion institute of technology gave a seminar at the Weizmann institute of science on 4Hb-TaS2, an intriguing compound that he had recently grown and measured,” Nurit Avraham, Abhay Kumar Nayak and Haim Beidenkopf, three of the researchers who carried out the study, told Phys.org. “One exciting observation he presented was an onset of increased muon spin relaxation, possibly signifying time reversal symmetry breaking, concurrently with superconductivity, which alluded towards the existence of topological superconductivity in this compound.”

“In our lab, we use scanning tunneling microscopy and spectroscopic mappings,” Beidenkopf said. “What was particularly exciting in the 4Hb polytype of TaS2 was that it interleaves 1H superconducting layers with 1T Mott insulating layers. Therefore, simply by cleaving and exposing the various terminations we could explore the mutual interaction between these distinct correlated states.” 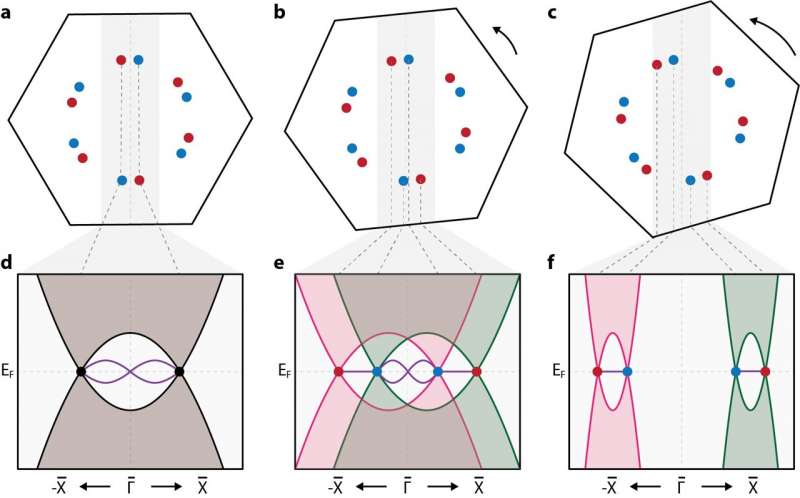 12 nodes are induced by the cross-orbital pairing term within the Brilluin zone. Their projection to various edges gives rise to the anisotropic character of the edge modes Nayak et al.

In the first topographic images they collected, the researchers observed a hint of the strong interaction between the 1T and 1H layers in the material synthesized by Kanigel. More specifically, they unveiled the imprint of charge density waves on the 1H layer, due to its proximity with the 1T layer beneath it.

The team then measured the superconductivity of the 1H layer and found that the superconducting gap was significantly shallow. This suggested that this gap was filled by in-gap electronic states.

“We later identified the existence of edge modes along boundaries of the superconducting layer,” Avraham said “The most intriguing one was an edge mode we observed on the interface between superconducting regions of the 1H layer, that are encapsulated by 1T layers from both sides, and exposed regions with no 1T layer on top. This relates to our first observation, suggesting that even though superconductivity remains continuous throughout the 1H layer, it changes its topological classification due to the interaction with the adjacent 1T layers.”

An additional result that supported the topological nature of the superconductivity in the 1H layer of the material was the visualization of zero-bias conductance peaks at vortex cores. The researchers were thus able to collect very strong evidence of the intrinsic topological superconductivity of 4Hb-TaS2. Subsequently, they started collaborating with a group of theorists to come up with hypotheses about the inter-orbital pairing mechanisms that may support the exotic phenomena they observed.

“While topological insulators, and even semimetals, are by now abundant, the list of topological superconductors in natural materials is extremely short,” Nayak said. “It includes SrO2 and FeSeTe and several other candidates as UTe2. Therefore, adding 4Hb-TaS2 to this list is exciting news, as it also hosts strongly correlated states and its layer structure can be changed from 1T to 1H by local tip manipulations.”

The findings gathered by this team of researchers suggest that the exotic compound realized by Kanigel is intrinsically a topological superconductor. In the future, this material could thus prove particularly valuable for the development of quantum computers and other quantum information processing tools. Meanwhile, the team at Weizmann and their colleagues plan to continue examining 4Hb-TaS2, specifically looking at the fate of the Mott insulating state on the 1T layer in presence of the metallic 1H layer.

“We have preliminary indications of an exotic state that forms on the 1T layer. Its evolution with superconductivity is also unresolved.” Avraham, Nayak and Beidenkopf added. “Perhaps these additional insights will bring us closer to a wholesome comprehension of 4Hb-TaS2, in which topological superconductivity on the 1H terminations is one exciting aspect.”