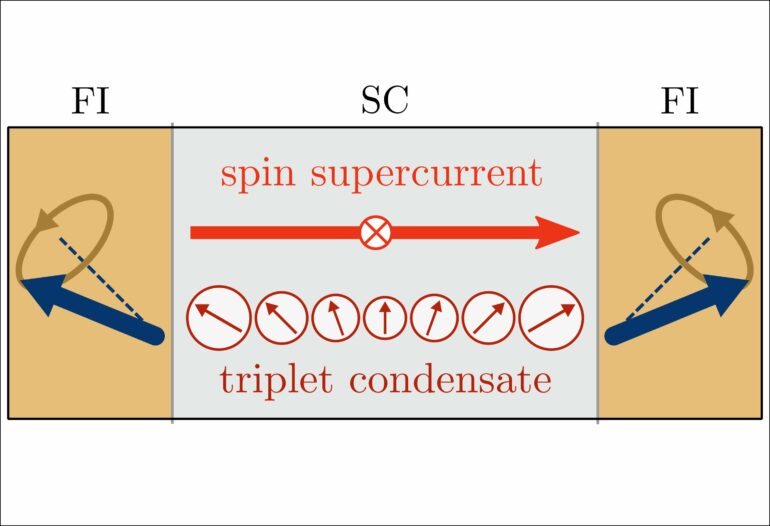 A group of theoretical physicists from the University of Jyväskylä and Tampere University, Finland, and the Materials Physics Center in San Sebastian, Spain, explain how superconductors can carry magnetic information to much longer distances than can conventional metals. The finding could be useful in information processing that uses magnetic materials at low temperatures.

Superconductors carry anything without heating up—or do they?

At low temperatures, some materials become superconductive, resulting in a vanishing electrical resistivity. Consequently, passing a charge current through a superconductor does not heat it up. Besides charge, electrons have other properties as well. One of them is spin, which describes the internal rotation of the electron around itself. Spin is the property needed to understand another type of state of materials: magnetism. Magnets and superconductors are rarely found in single materials. However, magnetic and superconducting materials can be placed next to each other so that they affect each other.

The new study, published in Physical Review Letters, shows how in certain circumstances superconductors can carry not only charge current between metals, but also spin currents between magnets to relatively long distances without producing excess heat. This is in contrast with ordinary conductors where such frictionless spin currents vanish within atomic distances.

These spin currents can be used to mediate magnetic interactions between different magnets in a controllable way. They also show up in how the magnets respond to external time-dependent stimuli, a phenomenon which is studied especially in the context of magnetic memory.

Such spin currents can be elusive since they do not produce electric signals. However, they can be detected indirectly by the change of the magnetic configuration. Alternatively, they significantly modify the magnetic dynamical response. In the article, the researchers describe the experimental signatures that indicate the presence of frictionless currents, in both static and dynamic settings.

Risto Ojajärvi, who provided the detailed calculation of the effect, explains: “Before our work, there was quite some confusion about the role of spin currents in superconductors and especially the way they operate in equilibrium. We now provide a unified picture which describes frictionless equilibrium currents on the same footing with the ordinary currents that cause heating.”

The work explains how in some cases the presence of frictionless currents in fact makes the whole system heat up more, and not less as would be naïvely expected. However, the heating does not occur in the superconductor connecting the magnets, but in the magnets themselves, which can efficiently transfer spin between each other through the superconductor. This form of collective dynamics is completely new, and it offers a broad perspective for the engineering of dynamical magnetic states.

Provided by
University of Jyväskylä