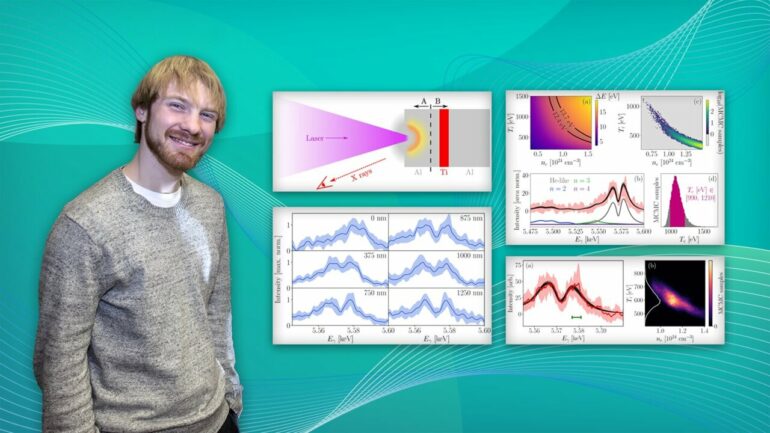 Exotic laser-produced high-energy-density (HED) plasmas akin to those found in stars and nuclear explosions could provide insight into events throughout the universe. Physicists at the U.S. Department of Energy’s (DOE) Princeton Plasma Physics Laboratory (PPPL) have discovered a new way to measure and understand these plasmas, among the most extreme states of matter ever produced on Earth. Improved understanding could provide benefits ranging from fine-tuning the high-density plasmas in inertial confinement fusion experiments to better understanding of processes throughout the universe.

HED plasmas are a billion times denser than those that fuel fusion reactions in tokamaks, doughnut-shaped magnetic fusion facilities such as the National Spherical Torus Experiment-Upgrade (NSTX-U) at PPPL. “Everything functions very differently in HED plasmas,” said PPPL physicist Brian Kraus, lead author of a paper in Physical Review Letters that describes the measurement techniques. “We need to better understand how physics works at these very high densities, but clarifying measurements have been difficult up until now.”

Plasma comprises 99 percent of the visible universe and consists of free-floating electrons and atomic nuclei, or ions. HED plasmas are so dense as to be virtually solid, unlike the gaseous state of tokamak plasmas, creating conditions that physicists are eager to explore.

Kraus generated HED plasma by firing ultra-high-intensity lasers at thin strips of titanium foil in the Laboratory for Advanced Lasers and Extreme Photonics at Colorado State University. He and colleagues then used state-of-the-art computer codes to analyze the high-resolution spectral data that an X-ray diagnostic captured from the plasma, which flashed into existence for just trillionths of a second.

The HED plasmas modified the X-ray lines by broadening and shifting them to lower energies, Kraus said. “Together these effects let us measure both the plasma density and the ion temperature, which had never been done before. These measurements are very difficult to obtain otherwise in such dense plasmas.”

The study revealed key aspects of the plasmas that had not been previously known. For example, the analysis found that the temperature of ions and electrons were not equivalent, as had been assumed in such plasmas, and the ions were substantially cooler. “It turns out that some approximations that people have been making don’t fit the data that we saw,” Kraus said.

Overseeing the path-setting findings was Philip Efthimion, Kraus’s thesis advisor, who heads the Plasma Science & Technology Department at PPPL and was a co-author of the paper. “Phil really guided me in planning for experiments and choosing which data analyses to pursue,” said Kraus. He received his doctorate from Princeton University in June and was named a staff researcher shortly thereafter.

“The results in Brian’s thesis are very special,” Efthimion said. “Brian’s ability to understand the X-ray line broadening resulted in accurate measurements of the electron and ion temperatures, simultaneously. It allowed us to conclude that the electrons and ions are not in equilibrium. This is the first time this situation has been observed in plasma near solid density. Brian mastered many research tools to complete this work. Observing and understanding new phenomena is what truly excites scientists.”

The experiment at Colorado State was enabled by LaserNetUS, a new consortium of laser facilities organized by the Department of Energy. Kraus made the published measurements as part of the program’s first experimental cycle. “LaserNetUS is transforming the landscape of laser science in the U.S. by expanding access to high-quality laser facilities,” Kraus said. “LaserNetUS provided us not just the runtime, but an opportunity to collaborate with great scientists outside of PPPL.”

Kraus had participated in the forerunner of the DOE Science Undergraduate Laboratory Internship (SULI) program and learned about plasma physics during the week-long course that PPPL delivered with the program. “I would never have heard about plasma until that course,” Kraus said. He then did his internship at the DIII-D National Fusion Facility that General Atomics operates for the DOE in San Diego, California. “That convinced me that this is an area of physics that has pretty direct worldwide importance for potentially solving fusion and having clean power available for everyone,” he said.

Kraus now is installing a high-speed camera to photograph the evolution of laser-produced HED plasmas at Colorado State. “We’re doing the same experiments this time but basically with a new camera that can see in time,” he said. “It’s very hard to make a movie when you want to see things that are happening in trillionths of seconds, so it warrants new experiments to set that camera up and see what we can learn,” he said.

Scientists also are developing “advanced codes without approximations that could enable complete modeling of HED plasmas,” Kraus said. Using such codes to conduct the analysis that PPPL has demonstrated could become “broadly applicable for diagnosing hot plasmas near solid density,” he added.


Citation:
Scientists create insights into one of the most extreme states of matter produced on Earth (2021, November 18)