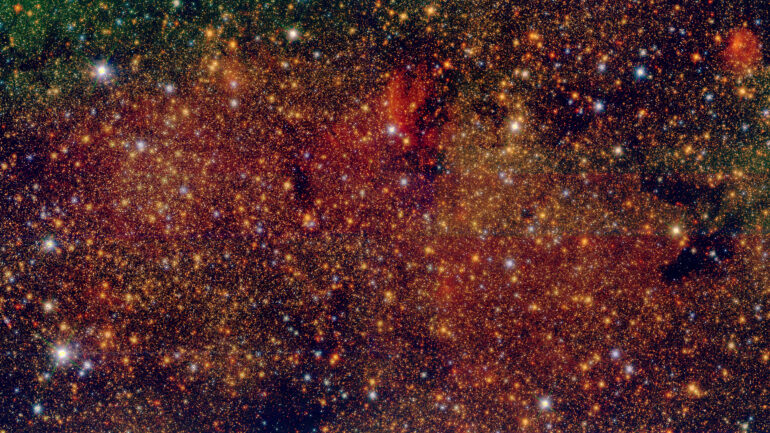 With the help of detailed observations, astronomers have managed to get a first representative glimpse of the numerous young stars in the central regions of our home galaxy. The observations provide evidence for star formation in the galactic center having started off near the center and then worked its way outwards. This confirms a mode of star formation that had earlier been found in the centers of other, distant galaxies. The results also reveal that most stars in that region did not form in tightly-bound massive clusters, but in loose associations whose member stars have long since gone their separate ways. The results have been published in Nature Astronomy.

When it comes to stars, the central region of our home galaxy, the Milky Way, is considerably more crowded than other parts of our galaxy. Astronomers have long been hoping this might provide them with a laboratory for studying rapid star formation—a phenomenon that occurs in numerous other galaxies, and in particular during the earliest billions of years of cosmic history. But the crowding makes stars in the central region notoriously difficult to observe.

Now, a new analysis based on a high-resolution infrared survey, which has just been published in Nature Astronomy, provides a first representative reconstruction of star formation history in the galactic central region. It also shows that most young stars in the galactic center formed not in tightly-knit massive clusters, but in loose stellar association, which dispersed over the past millions of years.

Our Milky Way is not a very productive galaxy. Taken together, the new stars our home galaxy forms in a year amount to no more than a few solar masses. So-called “star burst galaxies” are much more effective: During brief episodes that last a few million years, they produce tens or even hundreds of solar masses worth of stars per year! More generally, 10 billion years ago, that kind of high formation rate, with tens of solar masses produced each year, seems to have been the norm among galaxies.

Astronomers routinely use the Milky Way to learn about galaxy properties in general. After all, the Milky Way is the one galaxy where we have a ring-side view, and can study processes and properties up close, in detail. Given the Milky Way’s low star-formation efficiency, you might think that high-productivity star formation is one area where this recipe—study locally what happens in distant galaxies as well—does not work. But you would be wrong: In the Milky Way’s central regions, corresponding to the central 1300 or so light-years around our galaxy’s central black hole, star formation rates over the past 100 million years have been ten times higher than on average. Our galaxy’s core is as productive as a star burst galaxy, or as the hyper-productive galaxies of 10 billion years ago.

The challenges of observing the galactic central regions

But if we want to learn about high-productivity star formation from our galaxy’s central regions, there is a challenge: These regions are notoriously difficult to observe. To begin with, as seen from Earth, they are hidden behind copious amounts of dust. But that problem is readily solved: use infrared, millimeter wave or radio observations. At those wavelengths, the light will pass right through the dust, allowing us to view the galactic center. That is how the groups of Andrea Ghez and of Reinhard Genzel performed their Nobel Prize-winning observations of stars orbiting our galaxy’s central black hole (near-infrared), and how the Event Horizon Collaboration produced the first image of the shadow of our galaxy’s central black hole (millimeter waves at 1.3 mm).

With that first problem solved comes the next one: the galactic center is so crowded with stars that it is difficult to tell one star from the next. The exception are certain very bright giant stars, which are particularly luminous, stand out from the crowd and thus can be separated from the rest comparatively easily. This problem has vexed astronomers trying to make sense of high-productivity star formation in the galactic center for years. That there was such star formation over the past one to 10 million years is not in question—the presence of hydrogen gas split into its components (ionized) by ultraviolet light from hot, young stars, and the presence of X-rays characteristic for certain kinds of young, very massive stars, attests to that.

But with the crowding problem, the question “… so where are the resulting young stars, then?” has been difficult to answer. Before the new analysis described here, astronomers had only found about 10% of the expected total stellar mass in the galactic center—in two massive star clusters and in the form of a few isolated young stars. So where were all the other stars, and what were their properties?

A stellar census from a detailed survey

That was the question the authors of the newly published paper asked themselves. Francisco Nogueras-Lara, an independent Humboldt research fellow in the Lise Meitner group of Nadine Neumayer at the Max Planck Institute for Astronomy, and their colleague Rainer Schödel at the Instituto de Astrofísica de Andalucía in Granada, Spain, were in a unique position to go about finding the missing young stars in the galactic center: Schödel is the principal investigator (PI) of GALACTICNUCLEUS: a survey that made use of the HAWK-I infrared camera at the Very Large Telescope (VLT) of the European Southern Observatory to take nearly 150 pictures (in the infrared bands J, H and Ks) of the Milky Way’s central region, covering a total area of 64,000 square light-years around the galactic center.

Nogueras-Lara took the lead in the search. In order to identify individual stars in a crowded region, what is needed is resolution—the ability to distinguish small details in the sky. The VLT is comprised of telescopes with 8-meter mirrors. With a method known as holographic imaging—combining several short-exposure images in a suitable way to mitigate the blurring effects of Earth’s atmosphere—the survey managed to map its target region in much finer detail than ever before (with a resolution of 0.2 arc seconds). Where previously, only a few handful of stars had been mapped, GALACTICNUCLEUS provided individual data for 3 million.

When the researchers looked at the (false-color) images from the GALACTICNUCLEUS survey, they immediately saw that the region in the galactic center known as Sagittarius B1 was different. It contains considerably more young stars, which ionize the surrounding gas, than other regions—an effect that did not come as a surprise: Earlier observations, in particular of light characteristic for hydrogen gas being ionized by hot stars, had indicated as much. With the highly resolved GALACTICNUCLEUS observations, Nogueras-Lara and his colleagues were now, for the first time, able to study the region’s stars in detail.

Even with their high-resolution survey, astronomers could only study giant stars individually (not so-called main-sequence stars like our Sun), but the data from the 3 million stars they could study separately already contained a wealth of information. In particular, the astronomers were able to deduce each star’s brightness, compensating for dimming due to dust between us and a particular star. All of the stars in Sagittarius B1 are at about the same distance from Earth, and the distance from Earth to the galactic center is known; given that information, the astronomers were able to reconstruct each star’s luminosity—the intrinsic brightness, corresponding to the amount of light a star emits per unit time.

Particularly interesting was the statistical distribution of stellar luminosity for those stars—how many stars there were in each “brightness bracket.” For stars that are formed at the same time, that luminosity distribution changes over time in a regular and predictable manner. In turn, given such a distribution, it is possible to deduce at least a rough history of star formation: How many stars formed more than about 7 billion years ago? How many in the intermediate bracket between about 2 and about 7 billion years? How many much more recently? The luminosity distribution delivers at least a statistical answer—the most probable star formation history.

When Nogueras-Lara, Neumayer and Schödel analyzed their luminosity distribution, they found that indeed there had been several phases of star formation in Sagittarius B1: an older population that formed between 2 and 7 billion years ago, and a large population of much younger stars, a mere 10 million years old or even younger than that. Nogueras-Lara says, “Our study represents a big step forward in finding the young stars in the galactic center. The young stars we found have a total mass of more than 400,000 solar masses. That is nearly ten times higher than the combined mass of the two massive star clusters that were previously known in the central region.”

Building stars in the center region, inside out

Extreme exoplanet has a complex and exotic atmosphere

Interestingly, the stars the researchers found in Sagittarius B1 are dispersed, and not part of a massive cluster. That suggests they were born in one or more looser stellar associations, less tightly bound by the stars’ mutual gravity, which then rapidly dissolved as they orbit the galactic center on scales of several millions of years—leaving behind many separate stars. And while this result refers to Sagittarius B1 to begin with, it could also explain much more generally why the young stars in the galactic center can only be found by high-resolution studies like the present work: they were born in loose associations that have since dispersed into separate stars.

The presence of the older population of stars in Sagittarius B1 is interesting as well. In the innermost regions of the galactic center, there are stars older than 7 billion years, but virtually no stars in the intermediate age range of 2 to 7 billion years. This could indicate that star formation in the central region began in the innermost region and then spread to the outer regions—giving an overall trend for the chronology of star formation in those regions. For other galaxies, this inside-out mechanism to build the so-called nuclear disk—a small-scale disk made of stars surrounding the galactic center—had already been observed. The new results indicate the same thing is happening in our home galaxy’s central region.

As persuasive as the evidence from the infrared images already is, both for the reconstruction of star formation history and for the inside-out overall trend of star formation, the astronomers are eager to put their deductions on an even firmer footing. To that end, Nogueras-Lara and his colleagues plan to follow up their observations with the KMOS instrument at the VLT, a high-precision spectrograph. In the present study, the deductions were made based on the overall luminosity distribution. Spectral observations would allow the astronomers to identify some of the very young stars directly, from the appearance of their spectra. That would be an important cross-check on the results now published.

In addition, the astronomers will track the motions of the newly-discovered stars in the sky (“proper motion”). Near the galactic center, stars move comparatively fast. That is why, even though these stars are at a distance of about 26,000 light-years from Earth, thorough observations over the course of a few years will be able to measure their changes in position. Stars that formed in one and the same stellar association become dispersed over time, their motion is still likely to be very similar—so tracking proper motion would allow deductions about whether the stars in Sagittarius B1 were indeed born in one or more loose associations.

In conclusion, Nadine Neumayer says, “Both kinds of measurements will serve to hopefully confirm, but definitely refine, the results of the now-published work. At the same time, we and our colleagues will start exploring what the new insights into star formation in the galactic center can tell us about high-productivity star formation in other galaxies.”


Citation:
A first glimpse at the high-productivity star factory in the galactic center (2022, September 8)